The Chinese "borrowed" the design of Tesla's Cybertruck 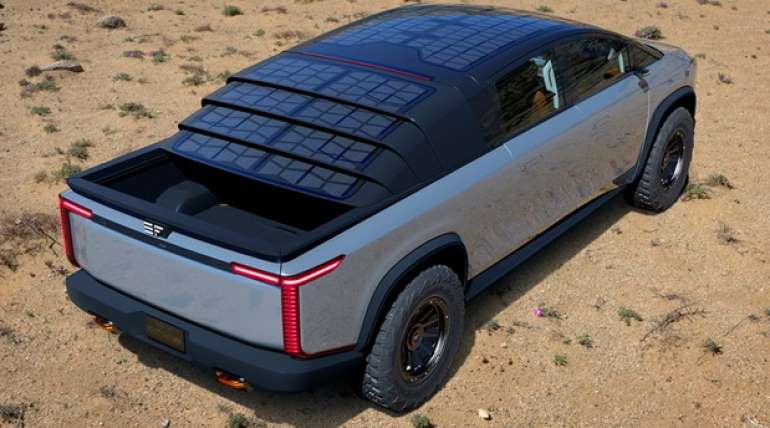 We have long been accustomed to Chinese copies of Western car brands. Another copy copy has appeared these days, and it is interesting because it borrows some of the design guidelines of Tesla's futuristic truck.

Chinese electric car manufacturer Edison Future has introduced its future electric-solar pickup truck EF1-T. It is a rather interestingly designed modern truck, which, in addition to electric drive, also stands out with a retractable solar roof, writes Autonet.hr. When fully extended, the solar collector covers the cargo area and gives the entire vehicle an elegant and aerodynamic side line. A small "problem", however, is the fact that at the time the EF1-T was quite similar to Tesla's Cybertruc.

True, this is a slightly more conventional body, without sharp edges and a monolithic construction made of bulletproof stainless steel - but still, it still reminds many of the announced Cybertruck.

Edison Future says that solar panels will be able to add about 40-55 kilometers of range during all-day sun exposure, and the total estimated range with one battery charge will be just over 700 km.

From zero to 100 km / h, the EF1-T should accelerate in less than 4 seconds, while its total payload will be up to 5 tons, all in the most powerful version. Like the Cybertruck, this truck will be offered in three variants - with one, two, or three electric motors. Prices have not been announced yet, and the manufacturer announces availability during 2025.

Cybertruck should hit the market at the end of next year. Its prices will be from 40 thousand dollars and more.