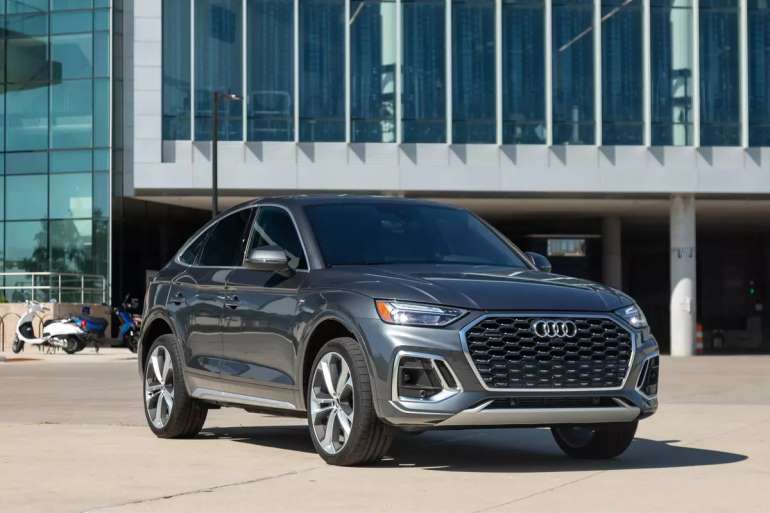 The verdict: The 2021 Audi Q5 Sportback trades some of the regular Q5’s utility for a sportier look — and sacrifices less practicality than expected in doing so.

Versus the competition: The coupelike SUV trend is a bit of a head-scratcher to us, given the body style often leaves less interior space than a traditional SUV (for more money). The Q5 Sportback doesn’t deviate from this formula, but its relatively few trade-offs enhance its overall appeal.

Besides the new Sportback body style, the 2021 Audi Q5 also gets updated exterior styling, a standard mild-hybrid base powertrain and a new multimedia system that drops the knob-based controller Audi has used for years in favor of a touchscreen interface. Take a look at the differences between the 2020 and 2021 Q5 in our side-by-side comparison.

Our 2021 Q5 Sportback test vehicle had an as-tested price of $56,540, including a $1,095 destination charge. It was equipped with the Premium Plus Package as well as Audi’s navigation and sport packages, the latter featuring a sport suspension and 21-inch wheels with summer tires. The car we drove also had an optional Bang & Olufsen stereo.

The Q5’s standard 261-horsepower, turbocharged 2.0-liter four-cylinder is a smooth-revving, responsive engine that moves this SUV well; a new mild-hybrid system has boosted efficiency of the regular Q5 for 2021, giving it a combined EPA rating that’s 1 mpg higher than the 2020 Q5’s. The engine is hurt, however, by very gradual accelerator pedal response in the transmission’s Drive mode, which makes the Q5 feel sluggish when starting off. Putting the gear selector in Sport improves drivetrain response immensely, though it also keeps the transmission in lower gears. The turbo four-cylinder works with a seven-speed dual-clutch automatic transmission that’s quick to kick down when you floor the gas pedal.

EPA-estimated gas mileage for the 2021 Q5 is 23/28/25 mpg city/highway/combined, which is similar to other . Audi recommends premium gas for the Sportback’s turbo four-cylinder engine, which is also the norm for this class.

Our test vehicle’s sport suspension and low-profile tires on 21-inch wheels contributed to a firm, unforgiving ride that sometimes felt brittle on rough pavement. The Q5 Sportback does, however, stay relatively flat in fast, sweeping turns, and it’s a confident and poised cruiser on smooth pavement. Apart from some tire noise, the cabin is very quiet at highway speeds.

Like other Audis, the Q5 Sportback has highly assisted steering that makes it easy to turn the wheel but doesn’t offer much in the way of feedback. Steering precision is good, however, and the Q5 responds readily to steering inputs.

Cabin materials’ quality and fit and finish are good, with soft-touch surfaces on the upper part of the dashboard and doors, but our test car’s all-black interior color scheme had a somberness to it that even a scattering of metallic accents couldn’t overcome. Some of the shinier center console trim even reflected sunlight into my eyes at times while driving. The console doesn’t have much storage space, either.

Power-adjustable front sport seats with manual cushion-length adjustment are standard. The driver’s seat is comfortable and not overly restrictive, and front headroom is good. Leather seating surfaces and front seat heaters are standard.

Despite the Sportback’s fastback roofline, over-shoulder visibility is decent thanks to large rear side windows, triangular rear-quarter windows and sizable back window. Crisp images from the available 360-degree camera system help, too.

The Sportback’s sloping roofline doesn’t significantly compromise rear-seat headroom, which is adequate for taller adults. The rear bench seat is comfortable, and it reclines and slides forward and backward. There’s good foot space under the front seats, too.

The Sportback’s cargo area is only marginally smaller than the regular Q5’s, according to Audi’s measurements: The brand says the Sportback has 24.7 cubic feet of cargo space with the rear seat up and 51.9 cubic feet with it lowered, versus 25.9 and 54.1 cubic feet in the regular Q5. The Sportback’s roofline reduces the height of the cargo area, and there’s a slight incline in the extended cargo floor with the backseat folded. Seatback release handles in the cargo area make it easier to fold the backseat when standing at the back of the SUV.

The Q5’s new touchscreen multimedia interface is simpler to use than the knob-based control system it replaces, and the ubiquity of smartphones should make it easier for owners to familiarize themselves with it. A 10.1-inch screen atop the center of the dashboard is standard. The system also includes wireless Apple CarPlay smartphone connectivity, but wired-only Android Auto.

The touchscreen has high-quality graphics, and CarPlay uses the screen’s full width. It’s easy to toggle between the multimedia system’s built-in interface and CarPlay, and the Premium Plus model adds a wireless charger — helpful for reducing battery drain in a wirelessly connected smartphone.

Premium Plus versions also add Audi’s Virtual Cockpit Plus digital instrument panel. It features a configurable 12.3-inch high-resolution screen in place of traditional gauges, and it can also show satellite image overlays in its navigation mode.

With nearly as much cargo space as a regular Q5 and comfortable seating for adults in both rows, the Q5 Sportback takes some of the practical reasons for choosing a regular Q5 SUV off the table. The Sportback’s starting price is $4,500 more than a Q5 SUV, but the Sportback also comes with larger 19-inch wheels and a panoramic moonroof in addition to its sleeker exterior. If you like its styling and the extra expense isn’t an obstacle, the Q5 Sportback offers most of the attributes of an SUV without looking like most SUVs.