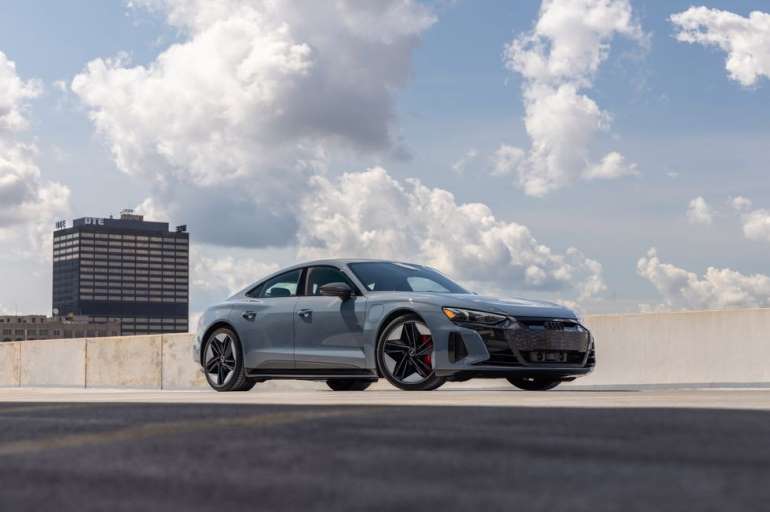 The e-tron GT has a twin at the Porsche dealer—the e-tron shares its platform, 800-volt electrical architecture, front and rear electric motors, two-speed automatic transmission at the rear axle, air springs, and all-wheel steering with the Porsche Taycan. While the Taycan offers a single-motor, rear-wheel-drive setup as well as the dual-motor-driven AWD 4S, Turbo, Turbo S, and Cross Turismo, at least for now, the all-wheel-drive GT comes two ways: the 522-hp e-tron GT and the 637-hp RS e-tron GT. Accessing all of those horses requires launch control, and then you only get the power for 2.5 seconds.

With typical use, you get a still heady 469 horses in the GT and 590 in the RS. The difference is one you're unlikely to miss on your drive to work. Audi's acceleration claims back up the roller-coaster feeling. We haven't tested the base GT yet, but Audi claims it will hit 60 mph in 3.9 seconds. The RS, on the other hand, rockets to 60 mph in 2.9 seconds and covers the quarter-mile in 11.0 seconds flat at 127 mph—stout figures that just edge out those of Audi's 591-hp RS7, though they're not quick enough for top honors among the latest internal-combustion supersedans. The RS GT's 60-mph sprint also isn't speedy enough to hang with the more powerful Taycan Turbo S and the last Tesla Model S Performance AWD we tested, both of which are roughly a half-second quicker to 60 mph.

The e-tron GT and RS's range figures will likely mean more to buyers. Per the EPA, the GT is good for 238 miles and the RS is rated at 232. Our testing of the RS revealed 240 miles of range, with our example averaging 71 MPGe overall and 83 MPGe on our 75-mph highway test, the latter result just beating its combined federal rating by 1 MPGe. Again, those are decent figures, but not the kind that leads to bragging among big-dollar EVs, especially if the conversation turns to Teslas.

On the road, the RS GT tours grandly. It hums and hauls so smoothly that the big numbers on the speedometer readout might come as a surprise. The low, hefty weight of electric cars—our RS test car tipped the scales at 5171 pounds—works in their favor when it comes to stable cornering, and 590 electric horses are more than enough to reshape your eyeballs. The GT's biggest challenges come from not having the longest range and not being the quickest or flashiest thrill ride in the park.

Audi gets points for using the steering-wheel paddles to control regenerative braking. It's just the sort of setting you might want to change on the fly, say, heading down a steep hill or coasting along in highway traffic, and being able to adjust it without having to dive into a settings menu is smart. The middle setting will feel the most familiar to gas-engine aficionados, and the max regen is almost but not quite aggressive enough to allow for one-pedal driving. The RS offers rear-wheel steering as an option. When fitted, the rear wheels also turn in phase with the fronts to improve high-speed stability; below 30 mph, the rears turn opposite to tighten maneuverability. Steering efforts are light, almost too light at slow speeds if the car is equipped with optional Power Steering Plus, which just boosts the steering assist to feathery at low speed. But once you get used to it, you'll be flipping tight U-turns just for the fun of it.

Fitted with 21-inch Goodyear Eagle Asymmetric 5 summer tires, the RS's 157-foot stop from 70 mph is in the hunt with the figures of other hot four-doors. But its 0.93 g of grip on the skidpad is rather modest for a modern sports sedan—electric or otherwise—some of which have posted well over 1.00 g of stick in our testing.

Audi tilts the GT's controls toward the driver, and everything you need is within easy reach. EVs have conditioned us to expect tech-focused or even minimalist interiors. The GT has a crisp digital display in front of the driver and a 10.1-inch touchscreen in the middle of the instrument panel, but there are—gasp—buttons for the climate control.

The GT does play into another electric-car expectation, however, that of the environmentally conscious and possibly vegan buyer. Leather-free interiors and recycled materials come standard, but if you want to sit on cow hides you can order up a less vegan-friendly version. Whether your seats were once alive or never alive, the GT supposedly seats five; just be sure to call shotgun. No one will enjoy the middle seat in the back. Legroom for the outboard rear seats is excellent thanks to cutouts in the battery, which mean deeper pockets for your tootsies. Headroom isn't as generous, as you pay for the stylish sweep of the roof with tiny back windows and an encroaching C-pillar. Somewhat surprisingly, the 71 decibels of sound in the RS at 70 mph are several decibels greater than we've experienced in comparable EVs, and it's even a touch louder than we've measured in a fire-breathing RS7.
Audi's brave new EVs start at $103,445 for the e-tron GT, a price that lines up with the Taycan 4S, which needs 3.4 seconds to eclipse 60 mph. Bring a $100,690 check to the Tesla store and you'll drive away in the quicker Model S. The RS version, with its carbon-fiber roof and extra power, starts at $143,445. That money would put you into an 1100-hp Model S Plaid+ AWD, which is likely to be the quickest EV we'll have tested once we get our hands on one. Complete with the comprehensive $20,350 Year One package, our RS GT carried a hefty $164,390 as-tested price.

Tagged under
More in this category: « Audi Q5 Sportback Review: As Practical as It Can Be 2022 Audi A3, S3 Review: Fast and Flawed »