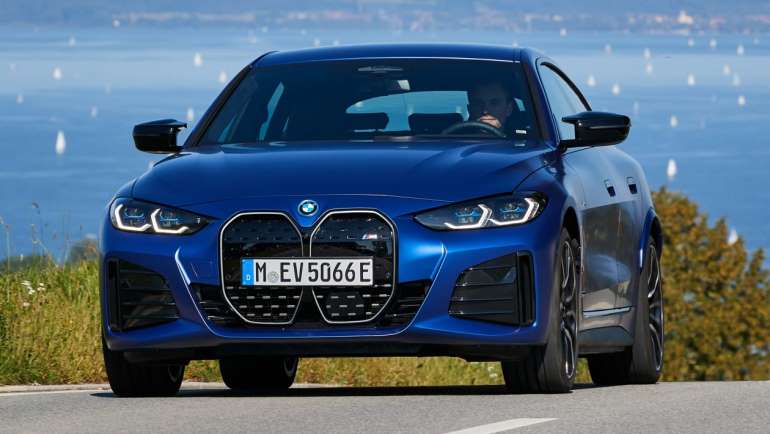 The BMW i4 is a vital new model for the brand because it represents the first all-electric model intended to win over buyers of its core BMW 3 Series and BMW 4 Series models. Not only that but it also locks horns with the Tesla Model 3 and Polestar 2, and gives BMW a headstart on Mercedes in the compact executive electric car class.

Most similar in proportions to the BMW 4 Series Gran Coupe, the i4 gets four doors and a hatchback but still looks low and sporty. In M Sport and M50 guise, it's also fairly muscular, with jutting bumpers, deep side skirts and a rear bumper diffuser in place of tailpipes.

At launch, there's eDrive40 and M50 versions that rival the Model 3 Long Range and Performance models respectively. The first gets a single 335bhp motor and rear-wheel drive, along with an 81kWh battery. It has a range of up to 367 miles and gets from 0-62mph in 5.7 seconds. The high-performance M50 is the first electric BMW to get attention from BMW’s M division and gets another electric motor for the front wheels, for 537bhp. This reduces range to 316 miles but also cuts 0-62mph to 3.9 seconds.

There's also the small matter of the i4's chassis, which could be one of the main selling points for buyers. Despite the car’s weight, a low centre of gravity, wide axles and BMW's suspension engineering means it certainly handles incisively, making it one of the best electric cars for enthusiast drivers we've tried so far. The steering isn't bristling with feel but has excellent precision and a natural weight to it.

While the basic interior design is similar to the 3 and 4 Series, there's also a big upgrade for the infotainment setup, which now runs the latest iDrive 8 software. There's a new seamless curved display for the instruments and infotainment, along with advances like a 5G connection, augmented reality navigation and an improved voice assistant.

Quality is good, with plenty of upmarket materials, and the i4 is very refined, which helps on long drives. Rear space isn't quite on a par with the 4 Series Gran Coupe because the battery eats into the footwell but the i4's boot is only 10 litres smaller.

The BMW i4 is a long-awaited arrival and demonstrates what’s required to fend off arrivals from relative newcomers to the market like Tesla. The car offers great handling, superb refinement and an impressive interior combined with a competitive range and plenty of performance.

BMW is clearly taking aim at the Tesla Model 3 and the manufacturer's 81kWh battery and fifth-generation eDrive electric motors deliver the goods - on paper at least. The rear-wheel drive eDrive40 can manage an impressive range of up to 367 miles, compared with 360 miles for the Model 3 Long Range.

With an extra motor and a lot more power, the i4 M50 sees this drop to 316 miles, which is still an impressive figure. We began our test drive with 90% charge, giving an indicated range of 232 miles. After 91 miles of mixed driving, the battery dropped to 44% with 112 miles remaining.

Find a rapid 200kW DC charger and the battery can be replenished from 10-80% in 31 minutes. A home wallbox takes around 13 hours to charge the battery from empty to 100%. A home charging cable, public charging cable and BMW Charging Card for use on the public network are included with the car. The latter includes free charging for the first 12 months.

Every i4 will be exempt from VED (road tax), which will be a significant cost saving, avoiding the surcharge usually levied against cars costing more than £40,000. Business drivers will form a big part of the i4's audience - as they have for the Model 3 - thanks to its low 1% Benefit-in-Kind (BiK) band during 2021/22. We expect insurance to be expensive, however, particularly for the M50 with its searing performance. i4 owners will also be able to drive into cities with low emissions zones without paying.

A lot is expected of the i4 because not only is it the manufacturer's most focused electric car to date but it's essentially a battery-powered version of its legendary 3 and 4 Series models. As a result, BMW clearly knew the car had to be good to drive.

Despite the car’s weight (over two tonnes), the weight distribution is 50:50 and the i4's battery has given it a very low centre of gravity. The axles have been widened compared with the 3 Series too. The result is that the i4 instantly feels lighter than anticipated, staying flat in corners and feeling well balanced.

The steering is a key ingredient, as it's both precise and natural enough to allow the driver to accurately place the car and build confidence in the i4. It isn't especially communicative, however, so it can be tricky to judge exactly how much grip there is at the front tyres.

So far, we've driven the M50, with 537bhp thanks to front and rear electric motors. It's enough thrust to get the i4 from 0-62mph in 3.9 seconds, and under full power the M50 hunkers down on its wheels and shoots forwards with startling pace. With no mechanical limited-slip differential, the car can start to lose its composure if you accelerate too aggressively out of a slow corner, so it responds better to a more relaxed approach.

While the M50 will give a BMW M4 a run for its money, at least in a straight line, most buyers will be more than satisfied with the eDrive40 model. With a single motor and rear-wheel drive, it has 335bhp and gets from 0-62mph in 5.7 seconds.

Solid and classy with an impressive but slightly busy infotainment system

The air suspension fitted in the M50 provides a smooth ride in its Comfort setting and refinement is excellent. Near-silent electric motors and an impressive lack of wind and tyre noise make the i4 a very relaxing car, even at motorway speeds.

The interior layout won't look too unfamiliar to 3 Series and 4 Series owners, and it has the same excellent build quality, with brushed metal finishes, leather and carbon fibre trim in our test car. The big change is the infotainment setup, which features a sweeping display combining a 12.3-inch instrument panel and 14.9-inch media screen, floating above the dash.

These are powered by the brand's latest iDrive 8 software, with new tech including 5G connectivity, augmented reality sat-nav and an Intelligent Personal Assistant. Its graphics are very sharp and lots of processing power means it responds quickly but we found the array of sub-menus tricky to navigate while driving.

The i4 is around the same size as the BMW 4 Series Gran Coupe but its all-electric nature does mean there are some differences inside. Front passengers can get nice and low, giving the car a sporty feel, but the floor-mounted battery means there isn't as much footwell space for rear passengers. Knee room still isn't too bad for taller passengers but they may find it uncomfortable for long trips.

Boot capacity impresses, with 470 litres of volume that's just 10 litres down on the 4 Series Gran Coupe. The Polestar 2 has a smaller 405-litre boot but unlike the i4 it also has a 35-litre 'frunk' under the bonnet. Both the i4 and the Polestar 2 have a hatchback opening, making it easier to load bulky items than the boot lid of the Tesla Model 3.

While BMW might not be such an obvious player in the electric car market, it has been building EVs and hybrid models for quite a number of years, including the BMW i3 which launched in 2013. The fact its eDrive electric technology is now its fifth generation should prove reassuring for buyers and we expect the car to prove extremely robust. BMW may even be hoping its EVs will give its reputation a boost, as it currently sits in 21st place out of 29 manufacturers in our Driver Power owner satisfaction survey.

The i4 is available with around 40 driver assistance features to make it safer and easier to drive and park. It's fitted with a reversing camera and Parking Assistant as standard, while the optional Driving Assistant Professional adds adaptive cruise control that can stop and start the car in heavy traffic. It can also help steer the car in its lane, reduce the likelihood of side and rear collisions and help prevent accidental speeding.

Tagged under
More in this category: « 2022 BMW iX xDrive50 First Drive: A Glimpse at the Future Here Is All You Need To Know About The 2024 BMW 5-Series »