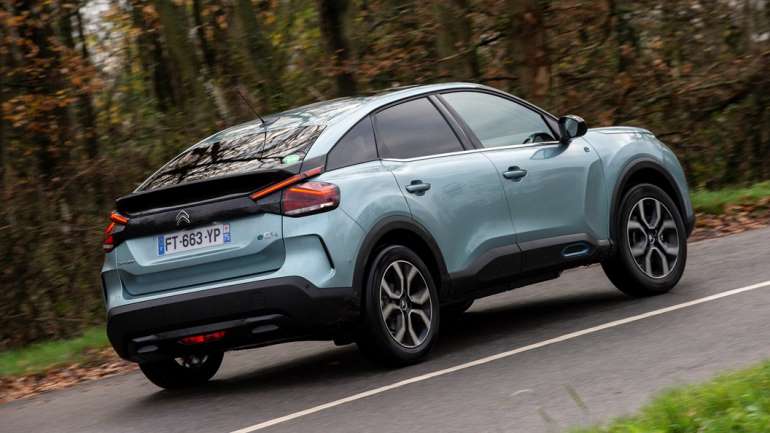 Citroen is hoping to make a splash in the electric car market by launching the battery-powered version of its new C4 hatchback concurrently with its ICE-engined counterpart. It’s a family hatchback that plays to Citroen’s re-ignited interest in its history and heritage as well as trying to arrest the inexorable march of the SUV by giving it some of the chunky attitude you’ll find in those cars.

The e-C4 is right on the money. It’s a family hatchback, but whereas the old C4 was forgettable and unsuccessful by basically being a less-good Ford Focus, the new one has been given individual styling, carrying the flame of individuality that’s returned to the marque since the launch of the C4 Cactus. Combine that with an electric drivetrain, which promises great refinement and efficiency, and you’re looking at the most zeitgeisty car to wear chevrons since the 1970 GS. 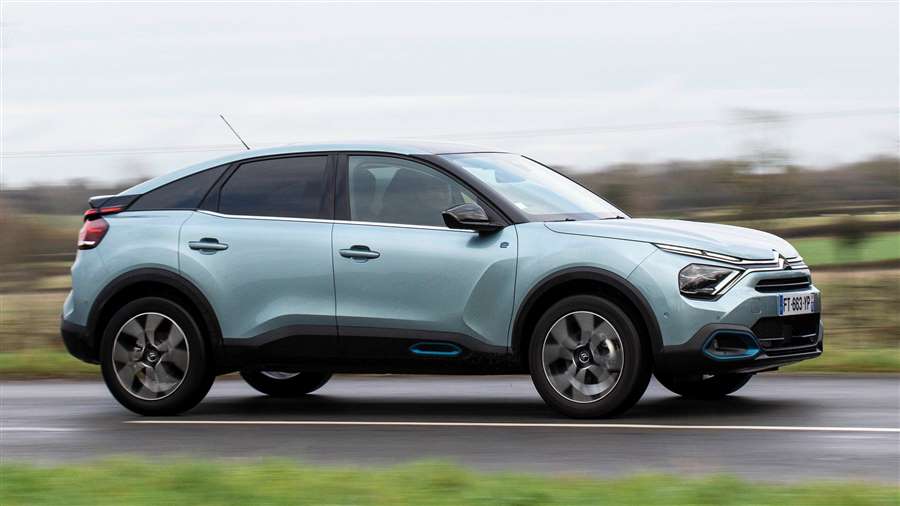 That’s certainly what Citroen is hoping. Marc Pinson (new C4 and e-C4 Designer) told us, ‘there are a lot of capable cars in this market segment, but they’re all very standardized. We wanted to give the C-hatch by giving it a flowing roof and coupé-like appearance. But we’ve added the SUV’s mass appeal.’

It sounds like an odd hybrid, but in the metal, it works really well. The slightly raised ride height and side cladding hint at SUV, but the six-light fastback profile are very much a continuation of the Citroen GS and BX. It’s a good-looking car, as you’d expect from the man who brought us the Citroen C6, dripping with interesting details, especially through the rear spoiler that splits its tailgate glass and the striking use of LED lighting.

That’s the design, what about the strategy? 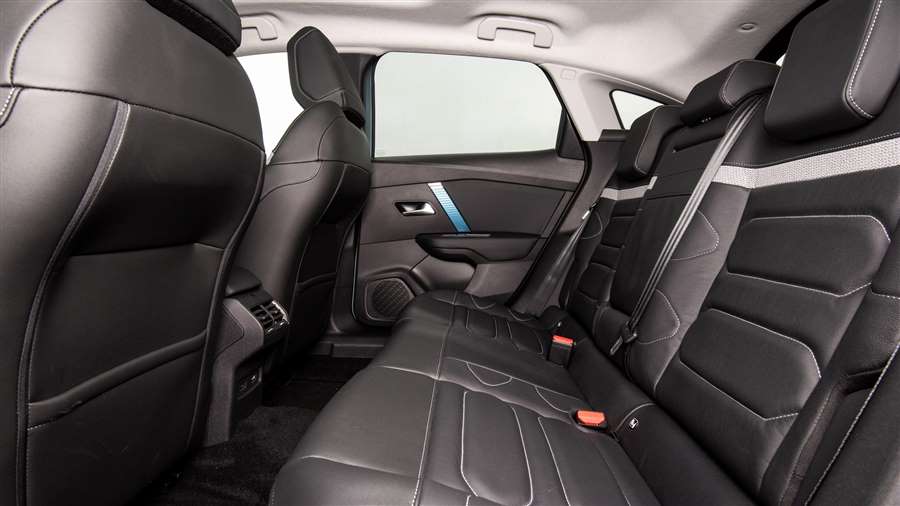 The first thing that will strike you is that aside from a few detail trim differences, the all-electric e-C4 and petrol and diesel C4s look identical. Yes, the e-C4 gets a light sprinkling of blue details, but on the road, it takes an expert eye to tell the difference between the two. This makes the e-C4 and ideal choice for those looking to move to electric without shouting about it.

It’s the same strategy employed by Citroen's PSA sister brands, Peugeot and Vauxhall. The Peugeot e-208, e-2008, Corsa-e and Mokka-e are outwardly identical to their ICE-engined cousins, a great advert for the adaptability of PSA’s EMP2 platform which allows for electric and ICE cars to be built on the same production line with great tech commonality. It also means that Citroen is unique for now in offering its mid-sized family hatchback in petrol, diesel and electric forms from launch.

The e-C4 doesn't actually have many direct rivals right now, but expect that to change rapidly. Right now, the Nissan Leaf, Volkswagen ID.3 are the main electric family hatchback choices for now. Widen your search to small SUVs, and you could include the Peugeot e-2008 or even the MG ZS EV. Does this lack of opposition give Citroen an open goal to aim for? 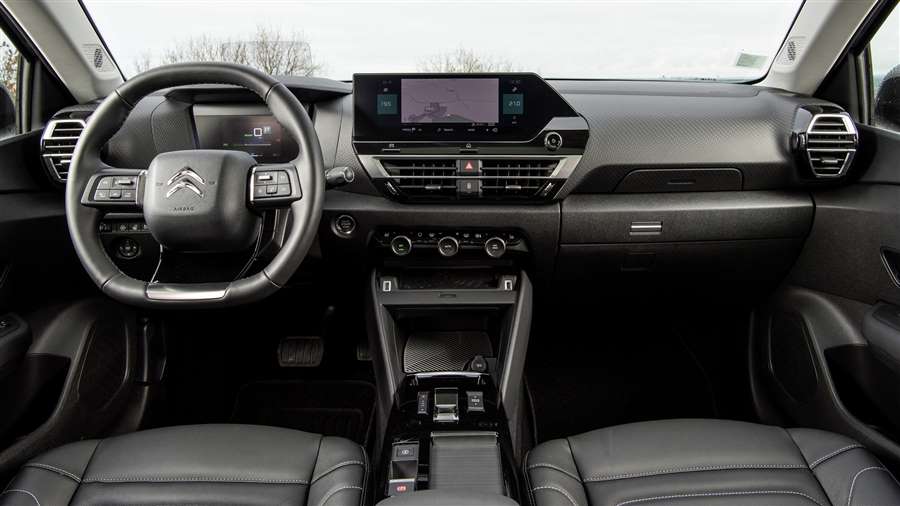 The e-C4 takes an interesting step forward for Citroen. It gets a development of C5 Aircross's all-digital dash and infotainment set-up – which means extensive use of the touchscreen for many of the car's functions – but it’s integrated more effectively and looks very stylish. The screen is big, displays crisply and sits proud of the dashboard to become a styling feature in its own right, and operates as well as a touchscreen can thanks to having a shelf below for you to rest your hand on while on the move. The addition of a row of physical buttons to operate the HVAC controls beneath is also a welcome development over Citroens of old.

As a family car, it works well, as there are plenty of nooks and crannies in the centre console, as well as easily-accessible USB sockets and storage bins between the seats, too. Citroen also points out a range of accessories and options that includes a wireless phone charger, head-up display and tablet stands for the front passenger.

As you’d expect, the latest version of Citroen's Advanced Comfort seats are successful in meeting their brief. They're well-sized and generously padded with high-density foam that incorporates a thick 15mm layer of textured foam on the surface. They manage to be both soft and inviting and also supportive on the move – an ideal set-up.

Rear seat room is impressive, with plenty of knee and headroom – impressive considering its sloping roofline. It has a 380-litre boot area with the seats up, which rivals that of the latest Volkswagen Golf, with a twin-level boot floor. That split boot floor means that with the panel in its uppermost position, there is no lip to get your heavy objects over. 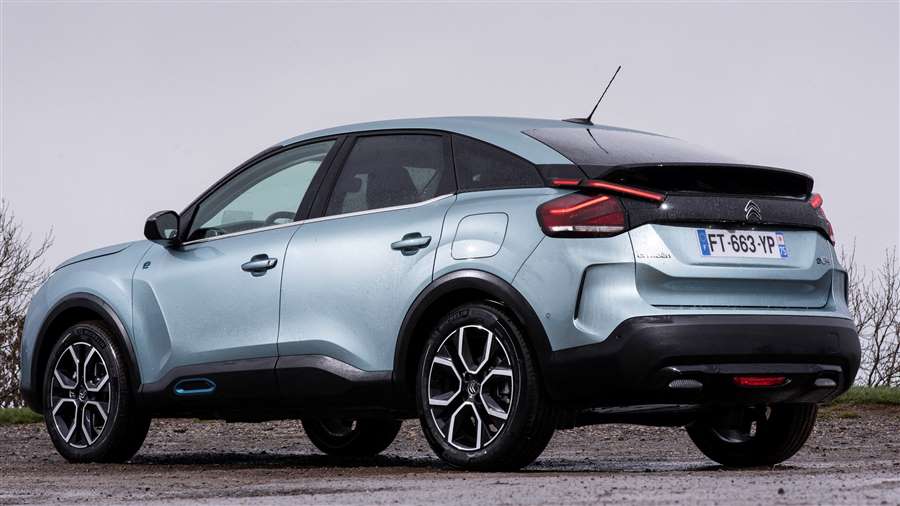 If Citroen was looking to extract the maximum serenity and refinement from its latest family car, then it has succeeded admirably. The light, airy interior and muted interior colours set the mood even before the off. But get in and make yourself comfortable in its squidgy driver’s seat, and setting off like a bat out of hell will be the last thing on your mind. This is all about wafting and kicking back.

Take off and performance, in Eco mode especially, is lacking the impressive surge you get with many electric cars, but it’s smooth and linear in its delivery, feeling effortless, and it gets up to cruising speed quickly enough. Performance is adequate in ICE terms, but is left behind by many of its EV rivals – 0-62mph comes up in 9.7 seconds and its maximum speed is 93mph.

Motorway refinement is impressive, with low levels of wind and road noise, while insulation from surface irregularities, such as potholes and broken tarmac, is also very effective. For all those Citroen traditionalists who decry the end of the Hydropenumatic set-up of old – the new way of thinking might not be as level and unflustered at speed, but it delivers similar levels of overall comfort without the compromises.

In isolation, ride, handling and roadholding are as you’d expect for a marque that plays up its heritage for building smooth-riding cars. The steering is light and lacking in feel, but accurate and well-geared, while the brakes are better than most EVs in terms of pedal feel, modulation and steering feel. At speed, it feels like it flattens bumps rather than ride them, and in corners it also feels a little unwieldy. It’s not easy to quantify, as understeer is well contained and bodyroll is all present and correct, but controlled effectively.

The relative lack of enthusiasm comes from us driving it back-to-back with the ICE-engined C4, which feels so much lighter on its feet and more effectively damped. Compare it with a Nissan Leaf instead, and the e-C4 is a standard-setter in body control and comfort.

What about charging and range?

The Citroen e-C4 has a 134bhp electric motor and 50kWh battery. That puts it behind the Nissan Leaf, Hyundai Kona Electric and top-end Volkswagen ID.3s, and although its official WLTP range of 217 miles looks good for a supermini, it’s a little on the skinny side for a larger family car these days.

We have some doubts about the real-world range, too, with the DTE range falling significantly faster than miles covered – a niggle shared with the Peugeot e-2008 – on our three-hour drive. We’ll wait until we’ve given it the full review treatment, though, before making a definitive judgment. However, if you’re going to be travelling distance and relying on public chargers on a regular basis, you might want to wait until real-world user data comes in before ordering one.

The good news is that the e-C4 supports up to 100kW rapid charging, allowing 80% of the battery to be charged in 30 minutes at a decent charging station. For home charging you get a Type 2 cable for free, allowing a regular 7.4kW charger to reach a 100% charge in seven hours and 30 minutes. From launch, all customers will be offered a Pod Point Solo Smart Charger thrown in, too.

What's available and when? 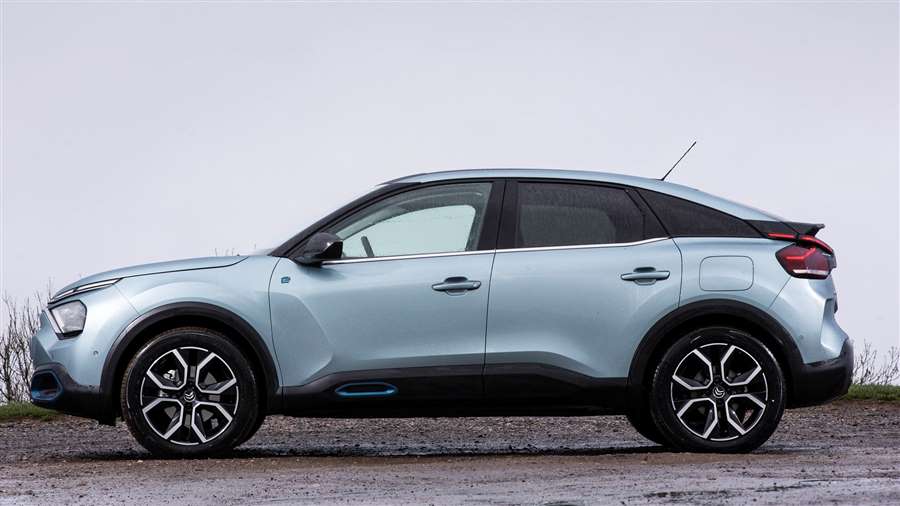 There are four e-C4 models to choose from – Sense, Sense Plus, Shine and Shine Plus. All models get LED headlights, a 10.0-inch touchscreen, Automomous Emergency Braking (AEB), Lane Keeping Assist and Driver Attention Alert. You can get a tablet computer holder for front seat passengers, LED interior lighting, a rear parking camera, and adaptive cruise control further up the range. A premium hi-fi system featuring uprated speakers and the addition of a subwoofer make it into the Shine Plus.

The e-C4 is available to order now with deliveries to UK customers commencing in February 2021.

Verdict
The Citroen e-C4 is a likeable electric car that goes a long way to broadening choice for those wanting to make the plunge into an EV. It’s a distinctive-looking car that we love for its single-minded pursuit of maximising comfort, and eschewing the increasingly tiresome roadholding bias prevalent in a generation of Nurburgring-honed family cars.

The PSA strategy of offering EVs and ICE cars that look the same is also interesting for those who want to go electric without making a fuss. Right now, the e-C4’s main rivals are the Nissan Leaf, which is ageing in several areas and the excellent Volkswagen ID.3, which is beginning to feel like a bit of a gamechanger. Both are bespoke EVs, designed as such from the ground up, and offer better range and efficiency. The e-C4 is more comfortable than both.

Citroen hopes that the new e-C4 will appeal to a wider range of buyers as a more-rounded product that majors on comfort and refinement. It looks well priced and comes with an impressive amount of equipment, as well as a free home charger. As it stands, we reckon Citroen has struck the right note with the e-C4, and doubts about battery range aside, it’s an impressive new addition to the EV market.