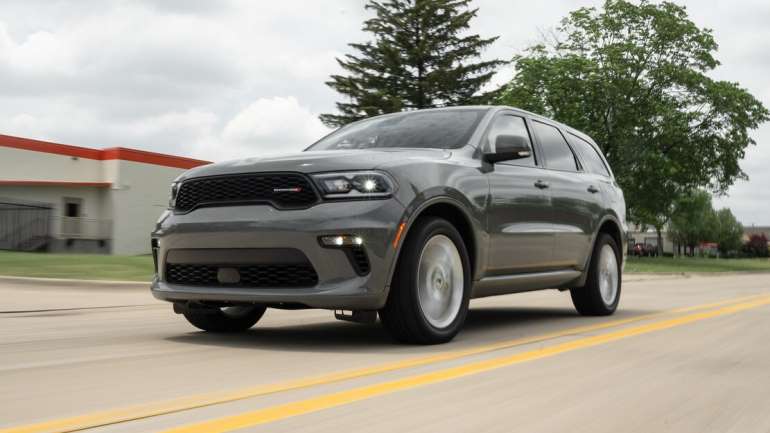 In its 11th year, the freshened Durango drives newer than some and tows more than all competitors.

This 2021 Dodge Durango GT seems a little like the older big kid in class who might have been held back a grade or two. Compared to his peers, he's more muscular, capable, mature. He'll never be valedictorian, but he's sure gonna get picked first for the tug-of-war team.

The third-generation Durango enters its 11th year with a freshened wardrobe (fascias, lights, spoiler, footwear), and a fancy 10.1-inch optional Uconnect 5 screen that's just as big, bright, and crisp as the calculators all those younger, scrawnier, smart-enough-to-skip-a-grade kids keep showing up to class with.

Given the advanced age of the 2021 Dodge Durango GT, the structure feels remarkably tight, absorbing road inputs without reverberation. Interior materials—even on this mid-grade example—also seem quite class-competitive, with stitching on the dash and armrests. It doesn't seem to want for much modern technology, either, with available wireless Android Auto and Apple CarPlay, over-the-air-upgradable infotainment, available wireless charging, a Wi-Fi hotspot, and a liberal sprinkling of A- and C-Type USB ports throughout the cabin. It feels notably newer than the 2018 Dodge Durango 4 R/T that spent a year in MotorTrend's Detroit office.

If you want your 2021 Dodge Durango to have key items like advanced brake-assist, forward-collision warning, and adaptive cruise control, they come bundled in a Technology Group option on most trim levels. It added $2,495 to this Durango GT model, it's not offered at all on the base SXT, and it's only included as standard equipment on the Citadel model. Yes, you must pay $2,395 for adaptive cruise even on the Durango SRT 392 and Hellcat.

Sadly, no matter how hard this big-boy studies, he's just never going to ace the crash tests invented after he started school, so the Insurance Institute for Highway Safety (IIHS) rates the Durango "marginal" on the small-overlap test. (Deficient structure and safety-cage performance resulted in poor lower-leg-/foot-injury-rating performance.) The National Highway Traffic Safety Administration (NHTSA) rates it four out of five stars in all but side impact (5/5).

Still Some Reasons To Buy

For these reasons and more, our MotorTrend Ultimate Car Rankings place the Dodge Durango toward the back of the three-row SUV class, but that doesn't mean it's not the ideal vehicle for certain buyers. Any Durango might be an obvious choice if you occasionally need to tow a 6,200-8,700-pound trailer but don't care to deal with the bulk, cost, and/or fuel economy of a full-size Chevrolet Tahoe, Ford Expedition, Nissan Armada, or Toyota Sequoia. The rest of the mid-size three-row class tops out at between 3,500 and 5,000 pounds, with the Ford Explorer rated next best at 5,300.

A Durango is also a compelling choice for those who just find such highly ranked SUVs as the Subaru Ascent, Hyundai Palisade, Honda Pilot, and Toyota Highlander too beige or bland (our SUV of the Year-winning Kia Telluride strikes us as neither). The Durango doesn't blend in with this crowd: Its muscular bodywork, aggressive air intakes, sporty dash, and well-bolstered seats establish a more aggressive vibe.

Put To The Test

But then, sporty is as sporty does, and all the structure and size required to make the 2021 Dodge Durango GT a great tow vehicle add a lot of weight relative to its classmates. The fact its aging 3.6-liter Pentastar V-6 ranks mid-pack in terms of power and torque helps land the AWD V-6 Durango a lowest-in-class performance of 7.8 seconds to 60 mph and 15.9 seconds through the quarter mile at 88.5 mph. The rear-wheel-drive model shaves but a tenth or two off those times without surpassing any other AWD competitors. Of course, stepping up to the first of the Dodge Durango's three V-8 options in an R/T model bumps it to near the front of the pack behind the lighter Ford Explorer ST and Honda Pilot Black Edition. In fact, the bigger-engine SRT models legitimately compete with fancy-brand Euro SUVs.

It's the same story with handling performance, where the V-6-powered 2021 Dodge Durango GT laid down figure-eight and maximum lateral-grip figures that largely trail the class, while the R/T ranks well and the SRTs are in another class entirely. But can we agree that folks in the market for a mainstream three-row SUVs don't plan on using them for bracket racing, gymkhana, or to burn up the Tail of the Dragon?

When those buyers aren't towing boats and campers on the weekend, they just want to haul people and stuff in quiet comfort. Here again, sadly, the basic 2021 Dodge Durango GT makes a less compelling case for itself. In terms of both overall cargo space with all seats folded, and third-row passenger volume, Durango ranks smack in the middle of the class. But tallying total passenger volume in each seating row plus cargo room behind the third-row seat, its 158.8 total cubic feet bests only the Toyota Highlander, GMC Acadia, and Mazda CX-9.

The newer kids are also getting mighty clever with things like third-row seat access. The forthcoming Jeep Grand Cherokee L and Nissan Pathfinder, for example, each allow the middle-row seat to tilt and slide forward while an empty forward-facing child seat remains installed. The Durango's middle-row seats, on the other hand, require the backrest to fold before dumping the entire seat forward for third-row access. Even if your family has outgrown child seats, the new way is easier—particularly with Nissan's electric actuator buttons.

Bottom line: If you don't tow anything and don't much care what your family-schlepper looks like, the SUVs at the top of our rankings list may offer better overall utility, superior safety, and lower ownership costs. But among the cool kids, this big, brash 2021 Dodge Durango GT is destined to win popularity contests.