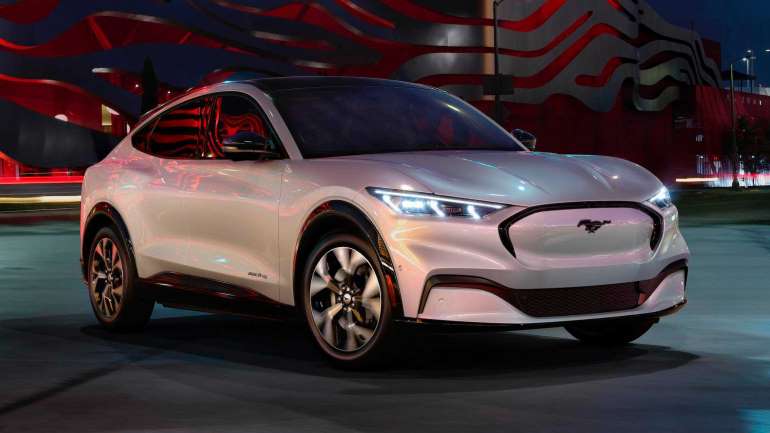 The Ford Mustang has a historic lineage that spans multiple decades, features hundreds of variations, and amounts to more than 10 million models sold. In the world of muscle cars, it is one of the most successful vehicles to ever do it. But with the future looming, the iconic Pony Car needs to take a dramatic new approach. The Ford Mustang Mach-E is both the first production-bound electric Mustang and the first Mustang crossover. It arrives as a vital stepping stone in Ford's push toward an electrified future, blending capability, performance, and efficiency into a single battery-powered package.

Mach-E For Everyone
So let’s get into the fundamentals. The Ford Mustang Mach-E comes with two lithium-ion battery pack options: standard range and extended range. The standard-range version uses a 75.7-kilowatt-hour, 288-cell pack, sending power to a large rear motor, while the extended-range option uses a larger 98.8-kilowatt-hour battery pack with 376 cells, sending power to both a motor at the front axle and rear. All that electricity gives the Mustang Mach-E a maximum range of up to 370 miles (under WLTP regulations) per charge on certain trim levels when equipped with the optional extended-range battery pack and rear-drive layout.

The Mustang Mach-E does come in a few different flavours. But consumers can only choose from two options beginning in 2020: Premium and First Edition. The First Edition model comes with the extended range battery pack and all-wheel drive standard, as well as unique visual treatments like red brake calipers, metallic pedal covers, and unique badging. But those hoping to get the least expensive Mach-E will have to wait until 2021, when the base Mach-E Select arrives.

That more affordable model offers a standard-range battery pack and either rear or all-wheel drive. The more-powerful California Route 1 model, which comes exclusively with extended range and all-wheel drive, won’t be available until early 2021 as well. The range-topping Mach-E GT Performance, the most powerful of the group ( for now), doesn't go on sale until later in 2021.

The Mach-E’s range figures are extremely competitive for the class. Not even top-end versions of cars like the Kia Niro EV (282 miles), Jaguar I-Pace (292 miles), or Audi E-Tron (222 miles) offer as much WLTP range. The Tesla Model Y, though not in production yet, beats the Mach-E with 336 miles of range on the long range RWD model.

Power Up
Ford guarantees its customers have access to 125,000 FordPass Charging Network locations in 21 countries across Europe. With the purchase of the Mach-E, buyers get access to said massive charging network using FordPass Connect, with the ability to recharge up to 57 miles in just 10 minutes with a maximum 150-kilowatt DC fast charging rate. Though, note that competitors like the Porsche Taycan and Tesla Model 3 can charge at rates as high as 250-kilowatts.

For the U.S. market Ford also offers a few home solutions, as well. A Ford Mobile Charger comes standard with the purchase of any Mach-E. Plugged into a typical 120-volt outlet, the home charger will trickle out an estimated range of about three miles each hour. Plugging the same Ford Mobile Charger into a more-powerful 240-volt outlet yields up to 22 miles of range each hour. Ford says that this application will charge up to 80 percent of the Mach-E’s pack overnight and makes the most sense for consumers.

But those buyers really wanting to take their charging game to the next level can purchase the optional Ford Connected Charge Station. Plugged into a 240-volt outlet, the higher-powered, 48-amp option adds approximately 32 miles of range each hour to the Mach-E. Ford says this is an easy way to get full charging overnight without utilising a public station. And more importantly, the company works closely with Amazon services for installation of said chargers.

It is unknown at this point whether the Ford Mobile Charger or the optional Ford Connected Charge Station will be made available in the UK.

Dial 'E' For Excitement
Don’t fret, Mustang faithful, performance is still a major part of the Mach-E’s equation. Even with its impressive range and charging capabilities, Ford tells us the Mach-E "still drives like a Mustang." And has the horsepower of one, too.

The most powerful model, the Mach-E GT Performance, produces 459 bhp and 612 pound-feet of torque, giving it the ability to hit 60 miles per hour in about 3.5 seconds. But, as mentioned, that model won’t be available until the spring of 2021. Until then, buyers will have to make do with the next quickest models available in 2020: the Premium and First Edition.

With the extended-range battery pack and all-wheel drive, the Premium and First Edition trims produce up to 332 bhp and 417 pound-feet of torque. The extended-range California Route 1 (not available until 2021) and Premium models with rear-wheel drive produce 282 hp and 306 lb-ft.

The stretched, revised pony logos on the six-sided grille and boot lid give away the Mach-E's family ties. But even the angled LED headlights share something in common with the coupe with which it shares its name, as do the tri-bar taillights. Outside of the obvious crossover cues and four-door setup, there are few areas where the Mach-E stands out next to its sibling.

For one, the Mach-E has no door handles. Instead, there are pillar-mounted buttons that pop the doors open upon pressing them, and a pull handle on the front driver and passenger sides. The rear doors, for whatever reason, don't get a pull handle. And the wheels don’t carry over from the coupe, either. Each version of the Mach-E gets its own 18-, 19-, or 20-inch wheel designs

The Mach-E's interior is all new, as well. The animal-free cabin uses high-quality materials like synthetic "Sensico" leather on the seats and steering wheel – a brand-new material for Ford – as well as Premium Black Onyx or Space Gray cloth on the dash and speakers, the latter of which looks ripped from an Amazon Alexa or Google Home unit. The dash, meanwhile, has a shape reminiscent of the first Mustang, which is a neat touch.

A massive 15.5-inch touchscreen sits front and centre on the dash, though it does feature a physical volume dial. That large touchscreen is standard throughout the range, as is the 10.2-inch digital instrument cluster and all-new steering wheel through which to view it. Ford's newest Sync infotainment system is also standard, as is Co-Pilot 360 2.0, Ford's latest active safety suite.

In terms of cargo room, the Mach-E offers a respectable 402 litres of space behind the rear seats. Fold the rear row, and there's 1,420 litres of room. And because there's no engine up front, the Mach-E has a "frunk," or front trunk (boot), with up to 136 litres. Not only is the frunk large enough for a traditional carry-on suitcase and then some, but is lined with a washable material and features a drain. Ford designers note it’s great for tailgating. Cabin space is equally impressive; the Mach-E's 1,029 mm of front headroom with the optional fixed glass roof is best in a class that includes cars like the I-Pace, Niro EV, and E-Tron, as is the 1,060 mm of front legroom.

Availability
The Mach-E goes on sale in Europe at the end of 2020 in Premium and First Edition trims only. Select, California Route 1, and GT Performance models won't be available until 2021. In the U.S. pricing for the Mach-E will range from just above $40,000 (approx. £30,890 at the current exchange rate) to the mid-$60,000s (£46,335), depending on how it’s spec'd. Ford will release European pricing information at a later date. But buyers interested in ordering the Mach-E early can place a $500 (approx. £390) refundable reservation deposit on the Ford consumer site right now.