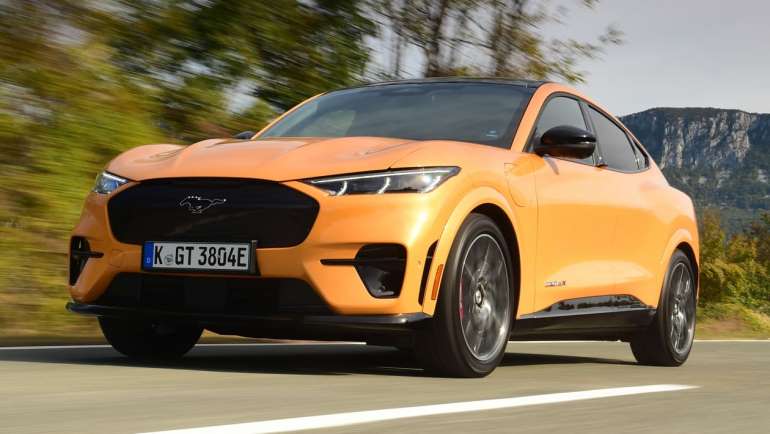 With 480bhp and a 310-mile range, does the new Ford Mustang Mach-E GT offers the perfect blend of performance and practicality? We find out...

The Ford Mustang Mach-E GT proves that EVs can be engaging – to an extent. The performance is a given, but the sharp steering and extra agility in Untamed mode help the GT’s case. However, the mass means this is only true up to a point, although the practicality on refinement on offer, mixed with genuinely usable range and respectable charging, make the GT a solid flagship for Ford’s first bespoke electric model line and a good electric SUV.

Ford has long been known for taking its run of the mill family cars and souping them up into something special. This is the fast Ford recipe, so it’s no surprise that the Blue Oval is taking a similar approach in the age of electrification, and the Mustang Mach-E GT is its first hot EV.

The strength of the Mustang nameplate means that a performance variant should sit naturally here, so the Mach-E GT boasts more power and torque, offering 480bhp and 860Nm respectively. It’s dual-motor powertrain gives strong traction off the line for a 3.7-second 0-62mph time, meaning it’s easily a match for the Tesla Model Y Performance.

On the move it feels it. As with many performance-focused electric cars, the throttle pedal’s map means you get a massive hit of torque with only a little travel and instant response to your inputs, so the GT romps forwards with an incredible urgency.

There are caveats, however. As long as you have the Mustang’s mass moving the response is good; this big EV’s relatively high kerbweight, at 2,273kg, means from a standstill it takes a little coaxing, while the thump also tails off at higher speeds. But at anything from town to motorway velocity, the Mach-E GT is more than rapid enough.

The enhanced powertrain is joined by some chassis upgrades in the form of Ford’s MagnaRide 2 adaptive suspension set-up, while 385mm Brembo brakes help stop the bulky machine and rein in its extra performance – but these additions have also been tuned with fun in mind, Ford claims.

Ultimately, that high weight means that the Mach-E GT is compromised; its straight-line punch is startling, but nothing we haven’t seen before from the likes of Tesla, while, despite the chassis tweaks, its mass is still obviously apparent in corners as you start to push the GT harder.

The steering is positive though, with a nice, fast response and relatively good grip, but it’s never truly engaging like the best fast Fords from history have been. You can feel some lethargy in quick direction changes, but it’s still not too bad for a big, battery powered SUV, and we should credit Ford with trying to inject some interest for keen drivers. In areas it has been successful.

You notice the difference as the latter offers an extra edge of adjustability that deserts some of its EV rivals, tightening its line noticeably on the exit of bends as you apply the power. Untamed Plus also preps the drivetrain for repeated high-power deployment. Exploit this punch frequently though, and you’ll not get near the claimed 310-mile range on a full charge. The GT is powered by a 98.7kWh battery, of which 88kWh is usable, while 150kW rapid charging capability means a 10 to 80 per cent top-up takes 45 minutes.

You can gain more energy back by utilising the GT’s one-pedal regenerative brake setting, and it’s best to use this tech and some anticipation to slow the car, because while those Brembo brakes have enough power, even given the mass they have to stop, the pedal isn’t progressive, and the set-up feels grabby. It means it’s not always easy to make smooth progress, which is at odds with the power delivery.
Drop the GT back into Whisper mode and refinement is improved, making this sportiest Mach-E yet a sound cruiser on the smooth tarmac of our Croatian test route.

The chassis is just compliant enough, with enough suspension travel to soak up smoother, more flowing bumps sweetly. However, riding on 20-inch wheels the worst imperfections in the road surface do cause a shudder, and the firmer set-up to control the Mustang’s mass and deliver an engaging edge means that it does feel stiff at times.

Along with the standard-fit alloys, the GT also features more bespoke trim, including Ford Performance seats with extra bolstering to deal with the higher cornering forces. There are also body-coloured wheel arches, redesigned bumpers bespoke to the GT, a 3D-effect grille in grey, and two new body colours – Cyber Orange and Grabber Blue.

Of course, the interior is still dominated by the central 15.5-inch Tesla-style touchscreen, which features Ford’s SYNC4 infotainment with connected nav. It’s an intuitive system to use and responds quickly, although with nowhere to anchor your hand it’s not always the easiest to use on the move. The letterbox-style 10.2-inch digital display behind the steering wheel is delightfully simple and easy to read, though.

GT spec inherits the Mach-E AWD Extended Range’s list of standard kit, so wireless phone charging, adaptive cruise with lane centring, all-round parking sensors and a 360-degree camera, dual-zone climate control, heated seats and a heated steering wheel, adaptive LED headlights and plenty of safety kit are all fitted. But then you’d expect as much given the price.

The tech is fine, but the £65,080 Mustang Mach-E GT could offer some higher quality materials in places compared with similarly priced premium rivals, such as the Jaguar I-Pace.

There’s also a hands-free powered tailgate, which reveals a 402-litre boot. Practicality is boosted by the 100-litre ‘frunk’ (great for storing charging cables), while room in the rear is fine despite the Mach-E’s slightly swoopier coupe-like profile, which the GT’s bespoke styling elements enhance to good effect.