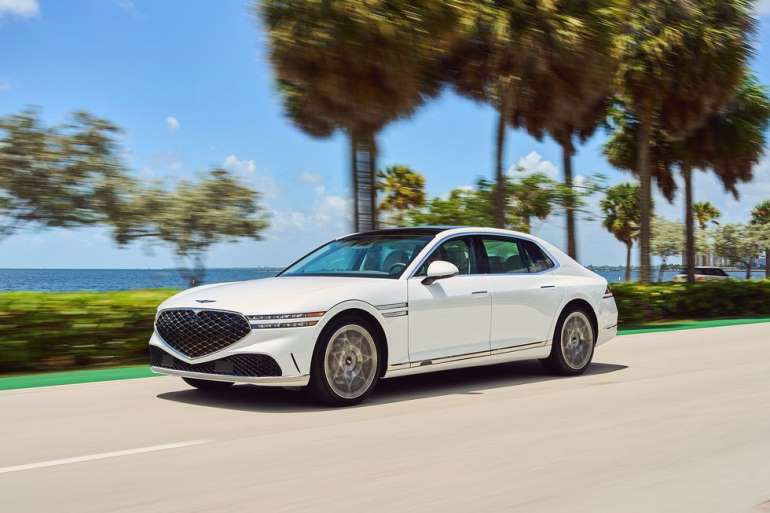 The G90 is Genesis's large-sedan flagship, and it's packed to the gunwales with features that typically belong to the ultra-luxury sphere. The elegant cabin masterfully shuffles a deck of leather, wood, metal, and microsuede trim, and there are reclining rear seats that heat, cool, and massage. Isolation and comfort dominate the experience. Material choices look and feel expensive, and all controls move with a satisfying slickness. Whether you're wafting along at 45 mph or 90 mph, the interior remains serene even as the scenery blurs outside.

A long 125.2-inch wheelbase yields enough legroom for NBA stars, and optional air springs keep the ride mellow and compliant, despite the thin sidewalls around the 21-inch wheels. Steering efforts are light, and while the roughly 5000-pound G90 isn't going to be confused with a sports sedan, it moves gracefully and deftly. Some credit for the easy maneuverability goes to the available rear-wheel steering that reduces the turning diameter from 40.1 to 37.1 feet.

A few taps of the 12.3-inch touchscreen have the 1700-watt, 23-speaker Bang & Olufsen audio system singing in different soundscapes. If you've always wondered how Dua Lipa or Jimmy Buffett might sound in Boston's Symphony Hall, the G90 is equipped to answer those burning questions. (They sound great.) Pause the music and start talking and you'll notice that microphones placed in the headliner pick up your voice and make it sound like you're standing in a concert hall yourself. The G90 is certainly big inside, at 105 cubic feet, but it's not theater big.

Should you want to go from Symphony Hall to an Abercrombie & Fitch from 2006, simply activate the fragrance feature that blows perfumed air through the vents, part of a system that Genesis calls "mood curator." And yes, Mercedes has offered piped-in scents for years, and opulent back seats and power doors aren't groundbreaking features either. What's remarkable is that the G90 delivers those kinds of features for $89,495 in 3.5T form or $99,795 for the 3.5T E-SC. That's still a lot of money, obviously, but it qualifies as a good value when compared with European sedans that cost thousands more.
In addition to all the content, the G90's powertrain refinement and hushed over-the-road behavior also remind us of cars costing twice as much. The previous G90's 3.3-liter V-6 and 5.0-liter V-8 are gone, replaced by a turbocharged 3.5-liter V-6 that can be had with an electrically driven supercharger. The turbo-only version makes 375 horsepower and 391 pound-feet of torque, with the top-shelf supercharged model we sampled bumping output to 409 horsepower and 405 pound-feet of torque. Nearly as effortless, smooth, and quick as an electric car from a stop, the V-6 pulls hard when pressed and never raises its voice—unless you turn on the artificial sound enhancements. A standard all-wheel-drive system puts the power down with zero drama, and shifts from the eight-speed automatic are nearly imperceptible. In Comfort mode, the transmission is slow to downshift, but once it does the surge is strong.

Despite a slippery drag coefficient of 0.27, the supercharged G90's 19.3-gallon tank empties at a rate of 24 miles per gallon on the highway and 17 mpg in the city, according to EPA estimates. The base engine manages 18 and 26 mpg, respectively. These numbers fall short of the six-cylinder-equipped Audi A8L and Mercedes-Benz S500 and are more in line with V-8 versions of the Audi and Benz. The supercharged G90's 20-mpg EPA combined rating does represent a 2-mpg improvement over the 2022 V-8 AWD model, however.

With so much right and comfortable, the G90's few off-key notes stand out. Apple CarPlay and Android Auto require a corded connection, when wireless phone mirroring—which we consider a must-have—is found on cars costing far less. Engineers also missed the opportunity to provide customers with configurable gauge displays, Wi-Fi, and the G90 lacks the smaller GV60's face-recognition system that unlocks the car when it sees you. The G90 does allow you to use your smartphone as a key, and it works without a fuss.

The G90 has never sold in high volumes, yet Genesis still put a lot of effort into the latest version of its big sedan. Whether you're driving or riding in that huge back seat, the G90 is comfortably numb when you want that and refined in a way that reaches well beyond its near-six-figure price. Brand snobs might not be impressed by the Genesis badge, but if we were valets, we'd leave this one out front.