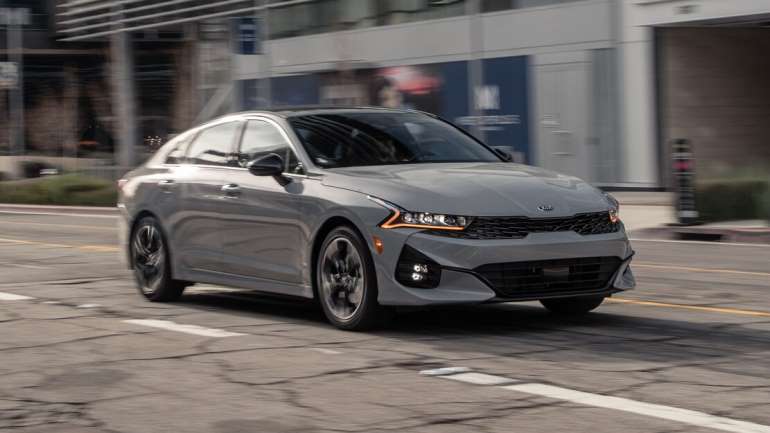 Never forget how important the right tires are.

"Power is nothing without control." That's not a quote from a notable historical figure or philosopher; it's part of Pirelli's marketing message, with the slogan plastered across billboards during Formula 1 races. The point is well taken, but Kia apparently didn't get the memo while it worked on the 2021 Kia K5 GT.

Funny enough, the Korean manufacturer ships the 2021 Kia K5 GT on Pirelli P Zero All-Season tires rather than the outright performance rubber it begs for. And those tires stick out like pimples on a teenager's face—you just want to pop 'em. However, an excellent and darn quick family sedan sits atop those four hunks of rubber.

Did Somebody Say Power?

Much like the 2021 Hyundai Sonata N Line we tested earlier this year, the 2021 Kia K5 GT's immense grunt comes courtesy of a 2.5-liter turbocharged I-4 that kicks out 290 hp and 311 lb-ft of torque. Those types of figures tend to be too much for the front wheels of most cars, and the Kia is no different.

Should you manage to avoid undue wheel hop and execute a clean launch, the K5 GT sprints from 0 to 60 mph in 5.4 seconds, just a tenth shy of the Sonata N Line. The 0.1 second advantage holds true all the way to the quarter-mile mark as the Kia crosses the line in 14.0 seconds at 101.8 mph. Although the all-season tires might not have limited the GT significantly during its acceleration runs, the rubber made a huge difference in braking and around our figure-eight course.

The 2021 Kia K5 GT needed 127 feet to stop from 60 mph, an unimpressive result for what is supposed to be a somewhat sporty sedan. The Rolls-Royce Cullinan, a yacht-sized SUV that weighs 2,715 pounds more than the K5 GT, stopped 20 feet shorter. Out of every 2021 model-year sedan we've tested to date, just one stopped in a longer distance: the Honda Accord EX-L, which needed 129 feet.

The Sonata N Line also stopped in a considerably shorter distance, just 110 feet, and the difference between the two sedans is even more apparent around our figure-eight test. The 2021 Kia K5 GT's time of 26.3 seconds at an average of 0.69 g was both slower and less grippy than the Sonata N Line's 25.8-second time at 0.72 g. Of course, the Hyundai we tested wore stickier rubber.

How Does It Feel?

Without available options for all-wheel drive or a limited-slip differential, the 2021 Kia K5 GT sells itself a bit short. After a riotous first five minutes behind its wheel, the charm of an absurdly powerful four-banger and an equally absurd lack of grip at the driven wheels tends to bleed into frustration. You'd like to stop screeching your way through every intersection and away from every stoplight, but at anything more than 50 percent throttle, the GT is either abusing its front tires or being suffocated by traction control—all the way into third gear.

But perhaps the most telling number regarding just how quick the K5 GT could be is how it accelerates at speed. It needs just 2.5 seconds to get from 45 to 65 mph; that's 0.2 second quicker than a Mercedes-AMG GLA35 and right on par with the 2022 VW Golf GTI. It's also quicker than the Honda Accord Sport 2.0, the midsize family sedan everyone wants to steal the gold medal from. The instant the K5 GT is no longer traction limited, its persona changes from a knuckle-dragging burnout machine into something resembling a legitimate sport sedan.

What's more, the rest of the 2021 Kia K5 GT doesn't lose any of what makes the K5 one of the better sedans in its class. The eight-speed double-clutch transmission is surprisingly snappy, and it rips shifts without hesitation whenever the driver beckons. It's nearly as alert as the DSG in the new Golf GTI, a standard-setter for mass-market twin-clutch transmissions. The car's overly light steering doesn't provide much in the way of feedback, but that hardly matters when there's so little grip to begin with.

However, the all-season tires might provide one advantage over a sportier tire: comfort. Despite sharing a platform with the Sonata N Line, the Kia K5 GT's ride is markedly better than the Hyundai's. Around town, the supple suspension tune and squishy tires deliver a sort of calm that contradicts the beastly character lurking under the hood. The ride quality isn't what you'd call serene all the time, and a fair amount of wind noise can creep into the cabin by way of the driver-side mirror. But the K5 GT's poise and the way it handles bumpy ruts make it easy to believe you're driving something much more expensive.

The K5 GT's interior features a lot of plastic, but it doesn't cheapen the car's appeal. Kia uses some nice materials for the cabin's touchpoints, and it breaks up the plastics used everywhere else. The dash is handsome and boasts a nice screen that integrates with the instrument cluster cowl instead of sticking out like a tacked-on tablet. The cabin is spacious for both front and rear passengers, and the trunk offers a handy 16.0 cubic feet and a wide aperture.

With all of Kia's excellent driver aids, a supportive pair of front seats, and easygoing road manners, the 2021 Kia K5 GT is certainly worth considering if you want a sedan with some hot sauce under its hood. Set your budget for some proper summer tires on top of the car's $35,705 base price, and you'll unlock its potential.