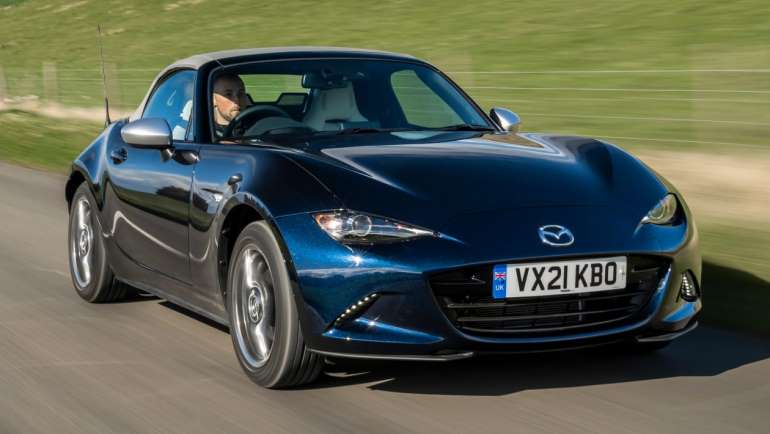 Like the standard roadster, the limited-edition MX-5 Sport Venture is a fantastic car to drive, thanks to its direct handling and buzzy naturally aspirated 1.5-litre engine. But the extra equipment Mazda has added to this limited-run car has pushed its price a little too close to its more powerful (and similarly equipped) siblings, which makes it hard to recommend unless you’re an avid MX-5 collector. You can find similar plushness and kit in the existing Sport Tech model.

Since the fourth generation of the MX-5 was launched in 2015, Mazda has released a steady stream of special-edition versions, following the pattern established by the three previous models. There was the Z-Sport in 2017, then a model that marked the roadster’s 30th anniversary in 2019, followed by a variant to celebrate Mazda’s 100th anniversary last year.

Now the company has launched the MX-5 Sport Venture, and it carries a little bit of heritage with it, because the limited-edition nameplate returns from the previous-generation car. The formula remains pretty much the same, too. Sold only in limited numbers, this one comes painted in a new Deep Crystal Mica Blue shade and with a grey fabric hood, which combine to give it a unique appearance among the MX-5 line-up. Stone-coloured Nappa leather upholstery gives it a premium edge over the Sport trim-level car it’s based on.

However, the £27,615 price-tag doesn’t look like much of a bargain when you consider that prices for the equally fun and much more practical Ford Fiesta ST start from £21,955. The MX-5’s price has crept up considerably since launch, but it remains a rare offering in today’s market.

The new MX-5 Sport Venture is only available with the entry-level 130bhp 1.5-litre four-cylinder petrol engine. If you would prefer an MX-5 with the stronger 181bhp 2.0-litre engine, prices for that version start at £28,670, £1,055 more than this special-edition model.

What’s the point of the MX-5 Sport Venture, then? Exclusivity for one, because just 160 examples will be sold in the UK. It also helps that it comes with a whole host of features that you can’t specify (even as options) on the cheapest 1.5-litre car, including the roof colour, the leather interior, and silver mirror caps.

It also comes with standard adaptive LED headlamps (borrowed from the high-spec Sport Tech model), which swivel as you turn the wheel to light up dark spots on the road ahead in tight bends. They’re a welcome addition at night on the sort of narrow B-roads the MX-5 suits so well.

As in the Sport model, buyers also get a Bose audio system, which will please audiophiles and tech geeks alike. It’s a bit more bassy than the standard stereo in the SE-L car, and has speakers built into both headrests, which help to defy the wind noise when driving with the roof down.

When you’re listening to music, the speakers play mid-range frequencies and, if you get a phone call, they pipe your contact’s voice directly into your ears. It’s certainly a handy feature but, again, it’s a benefit more than a necessity.

Mazda hasn’t made any mechanical changes to the MX-5 Sport Venture, which means it drives exactly the same as the standard roadster. So, the power steering is a little over-assisted for such a light car, but the rack gives you enough feedback to know where the front wheels are pointing.

The Mazda’s chassis more than makes up for this minor foible, though. It handles bumpy, pockmarked back roads with gleeful abandon, while the dampers are firm enough to keep the body flat through corners. And, given that you sit so low down and exposed in the driver’s seat, with the engine’s raspy exhaust note rattling off your surroundings, the sensation of speed is far greater than it would be in a hard-top sports car with three times the power.
The manual gearshifter is also one of the best in the business and, because you’ve only got 130bhp to play with, you’ll be constantly rowing through the ratios to try and keep the engine in its sweet spot.

Despite all of its many charms, though, the MX-5 Sport Venture still ends up feeling just a bit too expensive for what it is, which is mostly due to the level of tech Mazda has added, and the premium the firm thinks such exclusivity is worth. This special edition costs the same sort of money that used to secure a solidly equipped 2.0-litre version of Mazda’s iconic sports car.

The biggest selling points for the special edition are its styling and its rarity, which makes it hard to recommend unless you’re an MX-5 aficionado. If it were our money, we’d either opt for the £26,335 MX-5 Sport and pocket the difference, or splash the extra cash and go for the bigger, more powerful engine in the MX-5 Sport Tech.