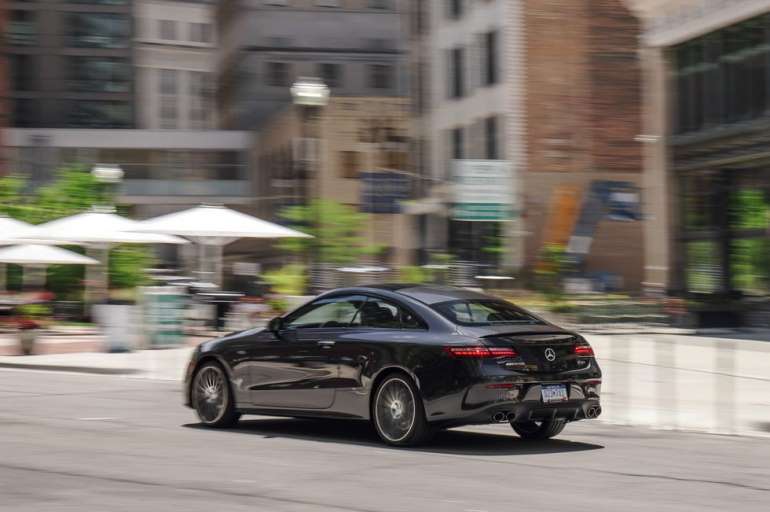 Mercedes
We had the 2021 Mercedes-AMG E53 over a perfect weekend, hot enough to appreciate a luxury car with a vigorous air-conditioning system and ventilated leather seats, yet breezy enough to pop up the sunroof and let the pine scent of mountain air and the smooth thrum of the inline-six engine fill the cabin. This is a no-stress car to drive in a variety of environments, cushioned and sophisticated for the city-street crawl, small enough to park, yet ready and willing to switch modes—easily, with a dial on the steering wheel—and make short work of long straights and rising twisties.

Mercedes offers the AMG-tuned E-class as a sedan, a cabriolet (for those in need of uninterrupted sun or vast rear quarter panels), or the coupe we tested here. We've always liked the E53's version of AMG performance. It's no cheapie, starting at $77,300, but it delivers elegance and power for the price. The E53 isn't as rowdy or violent as its V-8-powered brethren, but it packs an unexpected punch, and we all like a sleeper. It's slightly less a sleeper for 2021, thanks to updated front and rear fascias. The somewhat stodgy grille has been replaced with the Panamericana 12-strake shark's grin found on other AMG models. At the back, quad exhaust outlets flank the rear diffuser.

Take this thing out and people move over, even when you're just cruising. Nobody wants a grinning shark in their rearview mirror. If you do want to get on it a bit, the super- and turbocharged 3.0-liter straight-six is more than happy to help you make the pass. With 429 horsepower and 384 lb-ft of torque, the AMG E53 is more than capable of putting traffic behind you. Think 60 mph in four seconds flat and a quarter-mile pass in 12.5 seconds at 110 mph. It's still possible to catch the car off guard with a hasty bit of throttle application, but it's more a slow downshift from the nine-speed automatic transmission than it is reluctance on the part of the powerplant. Doesn't matter; it's momentary. And then the revs are climbing, the scenery is blurring, and the camper van that waved you by is far back in the distance.

If the E53's exterior is somewhat subtle even with the redesign, the interior is like sitting inside a collector's-edition baseball mitt. Ours was a brash combination of black and brown leather. You may have grown tired of the mossy accumulation of faux suede in modern interiors—you won't find even a tuft of it in the E53. There is one optional interior with Dinamica suede, but our $100,160 test car was broad color blocks of leather everywhere. Mercedes's art-deco metal speaker covers and turbine-engine air-conditioning vents look a little anachronistic against the more modern door panels and carbon-patterned aluminum dash trim, but the overall effect is one of quality and confidence. The design elements continue through the whole of the cabin, with the back seats treated to the same motif: Everyone gets a big chunk of brown leather to rest an arm against. It's also very comfortable, although more so in front than in the back. There's plenty of headroom back there despite the arched coupe roofline, but legroom gets tight as the front seats go back, particularly at the foot box. As in most coupes, the rear is best saved for short journeys and people you don't like, although the lack of a B-pillar does lend an old-school Chevelle-like airiness to the back seats. We also wouldn't give it high marks for ease of child-seat installation, as there's a lot of quarter-panel between you and the LATCH anchors. This is a car for commuting and date night. Leave the kids at home.

The refreshed E53 gets the glitzy Mercedes MBUX infotainment system. A 12.3-inch center touchscreen merges with the digital dash in a wide sweep of glass that's impressive enough to elicit gasps from passengers who aren't used to such futuristic cockpits. It's controllable via touch, console touchpad, steering-wheel touch, and voice. The system is great—quick, clear, and compatible with Apple CarPlay and Android Auto—but we'd happily trade the haptic steering-wheel pads for old-fashioned buttons. The digital dash offers seemingly endless info and layouts, and we saw them all in rotation, thanks to accidental thumb swipes across the touch sensor every five minutes. It's a case of too many options just because you can. Similarly flashy and of dubious usefulness is the center screen's habit of displaying the view from the front-facing camera at stoplights. Thanks, Mercedes, but there's a little thing called a windshield here—we can already see what's in front. Precious seconds were lost switching it back to the CarPlay screen to see the next turn. A few more seconds will be spent fumbling to find the tiny Park button on the wee shifter lever. We can only imagine that the interior-design team at AMG consists of one designer with hands the size of dinner plates—they did the thick tree branch of a steering wheel—and another who is an actual fairy, responsible for the miniscule steering-wheel buttons and the delicate shifter stalk buried behind the big wheel.

After you've found the shifter and put it in Drive—a pinkie-out activity if ever there was one—the gentle part is over. It's not that you have to muscle the E53 around, but it lets you play rough with it. There's a tendency to say that any good-handling car feels lighter than it is. That's not the case with the E53. It feels every bit of its 4511 pounds, but it's a controllable weight, turning in smoothly while feeling planted. Comfort mode is a little soft and sluggish, but Sport feels excellent, firm enough for aggressive cornering, sharp in the steering, and upping the feline growl of the engine; we recorded an invigorating 85-decibel snarl at full throttle. Sport+ is the top option, but it makes for a less comfortable ride and mostly just ratchets up the harshness. As the 4Matic+ badge indicates, it does use the AMG-tuned version of Benz's all-wheel-drive system, which can send as much as 100 percent of the torque to the rear axle.

Shod with 20-inch run-flat Pirelli P Zero PZ4 Run Flat summer tires, our test car’s 0.87 g of skidpad grip couldn’t quite match the 0.91 g posted by a similar 2019 model we tested, and its so-so 172-foot stop from 70 mph was a few feet longer than that previous car's effort. More impressive is that the E53's performance is accompanied by a solid 32 mpg on our 75-highway test, a 4-mpg improvement over its EPA estimate.

If you're looking for a car to charm strangers and start conversations at gas stops, this isn't it. The Mercedes-AMG E53 coupe does not make friends. When we parked it in the cute hippie mountain town of Wrightwood, California, a couple of teens on bicycles immediately glared at us. "Gentrifiers," one whispered to the other. Okay, maybe not, but they thought it, and they weren't wrong. This car's appearance in a neighborhood means home prices are about to go up. It exudes the same elegant menace as the molten ball of mercury in Terminator 2, right before it morphed into a killing machine. It's intimidating on the road and when parked, which is good—a Mercedes should not endear you to people. It should make them think you're going to represent their corporate enemies in court and win. This is a winner's car. No wonder it's grinning.
(https://www.caranddriver.com/reviews/a37049268/2021-mercedes-amg-e53-coupe-drive/)
Tagged under
More in this category: « Mercedes-Benz W114/W115 Meets The EQE Classic 2022 Mercedes-Benz EQS450+ Electrifies Luxury »