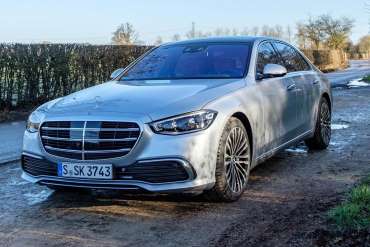 Is the Mercedes-Benz S-Class any good?

You bet! Without fail, each new generation of Mercedes-Benz S-Class is tasked with setting new standards of excellence. And in the case of this one, its maker has pulled out all the stops with a car that's designed to be smoother and more serene than ever before.

But even if you're not in the market for a high-priced luxury car, you reall should take notice of this one. Much of the technology that debuts in this car will undoubtedly filter down into more popular cars over the next few years.

The S-Class also needs to be exceptional, as it faces a diverse and incredibly capable set of rivals in the form of the Audi A8, BMW 7 Series, Bentley Flying Spur and the Rolls-Royce Ghost. It also has to battle top-end SUVs, such as the Mercedes-Benz GLS as well as the ever-popular Range Rover. 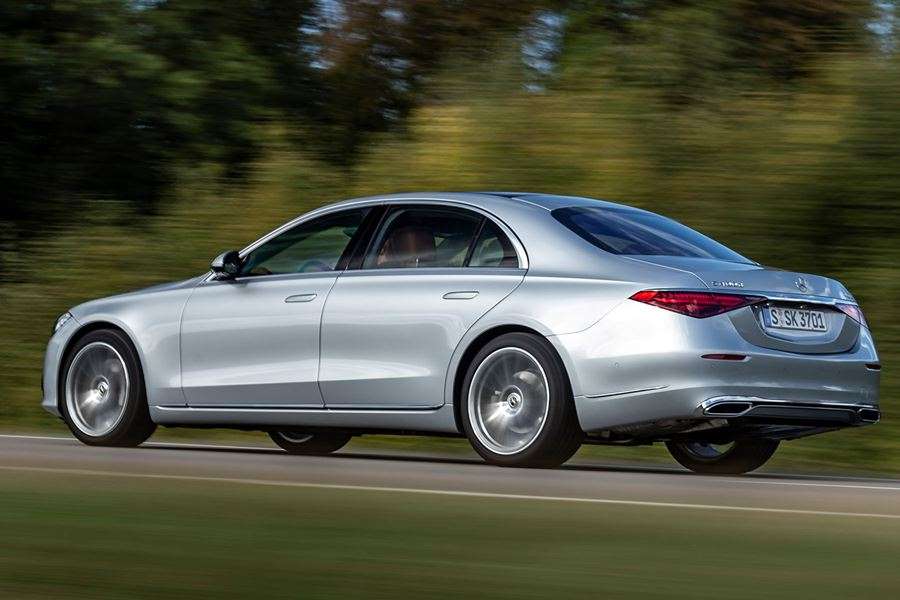 This is ignoring the growing selection of four-door coupes as well (Mercedes’ own offering, the CLS, is based on the E-Class but traditionally delivers the luxury of an S-Class in a sportier, smaller package) and Porsche Panamera. There are many, many vehicles the S-Class needs to outclass to get your attention – and, apologies for the spoiler, but we think it manages it.

This is, perhaps, the most welcoming S-Class interior yet, with an almost cosy wrap-around feel and lavish, soft surfaces everywhere. Technology still defines the S-Class' mission to blaze a trail others follow though, and there's a single, large display panel that slopes downward, with a central infotainment touchscreen dominating the overall view up front. 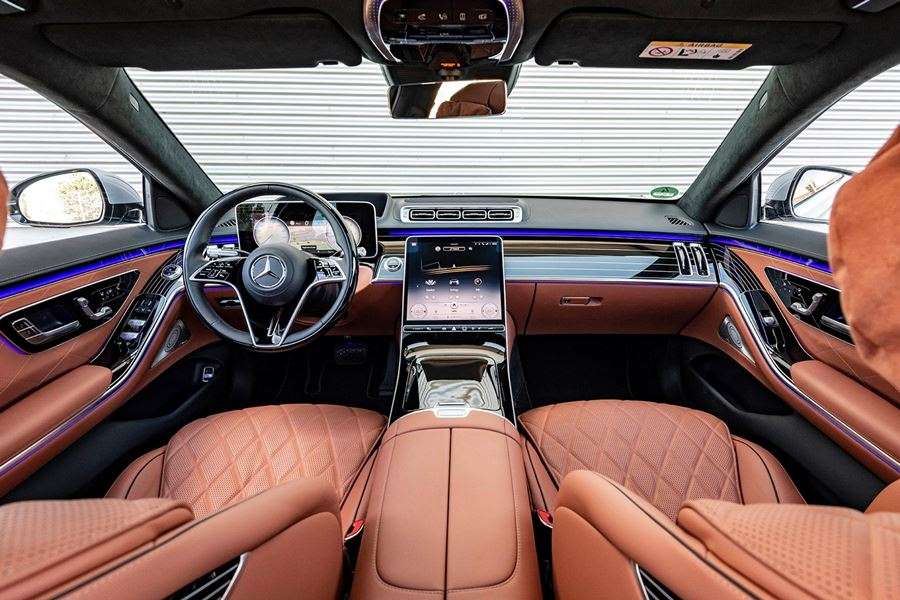 A new air filtration system is included, which can do things like pump perfume into the vents and automatically activate the recirculation setting when you go through a tunnel.

The 12.8-inch control screen is available with haptic feedback and OLED technology, and is easy to read from all angles and interact with as a conseqence. That clean interior design approach extends to the use of an augmented reality head-up display and 3D instruments that can be reduced to a minimal amount of information.

Several different designs can be had for the digital instruments, including a sporty one with red dials, to the classy Exclusive theme that displays white dials and backgrounds.

Mercedes-Benz’s MBUX 'Hey Mercedes' voice assistant has also had an upgrade, allowing for even more natural speech. If someone says they’re tired, one of the car's Energising Comfort programs can be activated, for example. When certain prompts arise, like an incoming call, the ‘Hey Mercedes’ activation phrase is not required – someone can simply say ‘Accept call’ – all in an attempt to simplify using the car's vast array of functions. 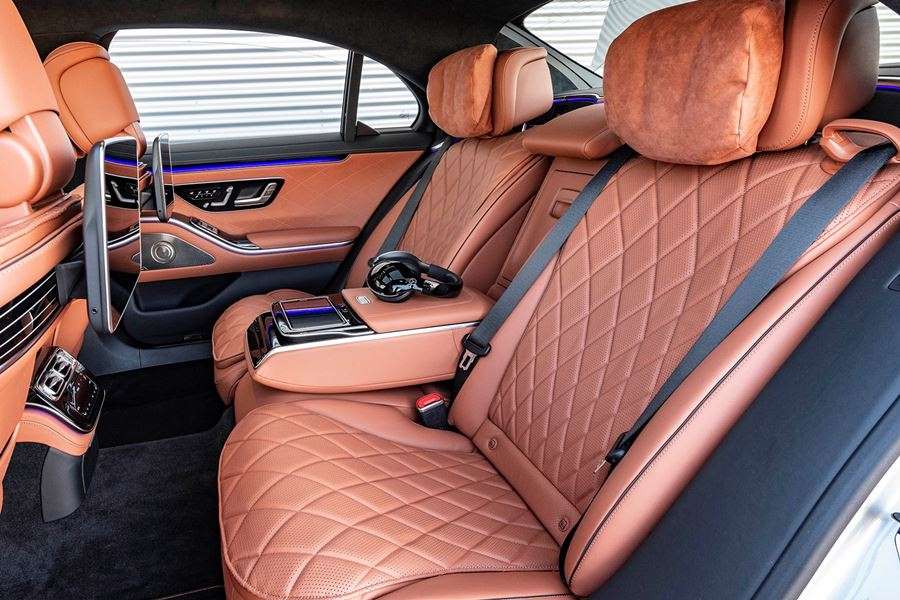 Currently, there are two diesels and one petrol to choose from, all of which use Mercedes-Benz’s latest straight-six engine range. The S 500 petrol also has 48v mild hybrid assistance that helps boost torque and all hit 155mph. We've only driven the S 500 version so far, but it's powerful, smooth and surprisingly economical, given its size.

Unsurprisinly, S-Class majors on comfort – it rides on air suspension that lowers itself automatically at speed while giving a soft ride for passengers. Rear-wheel steering is also available in two versions, with one set-up allowing the rears to turn at up to 10 degrees. Mercedes claims that, four-wheel steering gives an S-Class has a similar turning circle to an A-Class hatch. 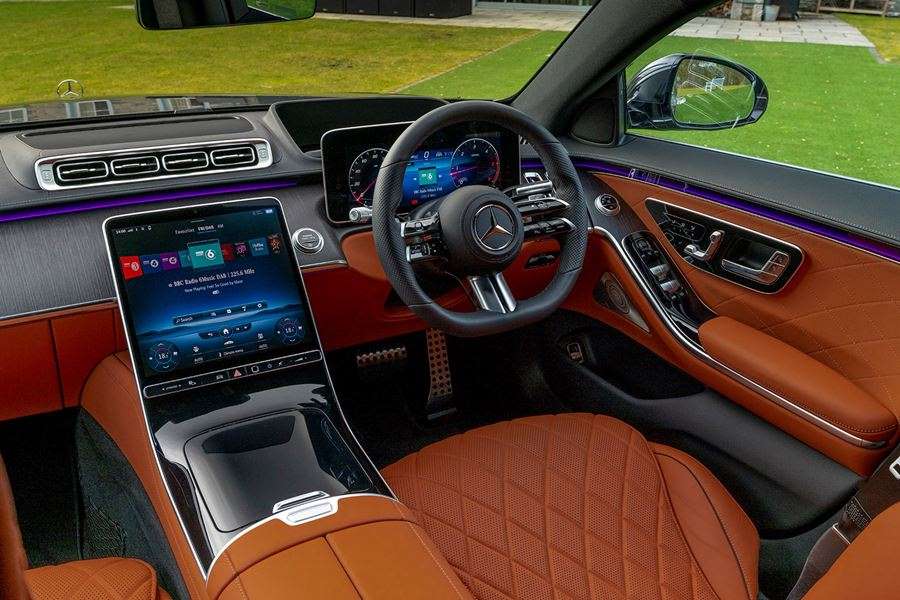 One advanced option is the E-Active Body Control system, which allows the new S-Class to tilt into corners like a Pendolino train. The technology also raises the ride height by 8cm when sensors detect a side impact is imminent, positioning the chassis to take the brunt of the crash via the door sills, rather than the doors themselves. 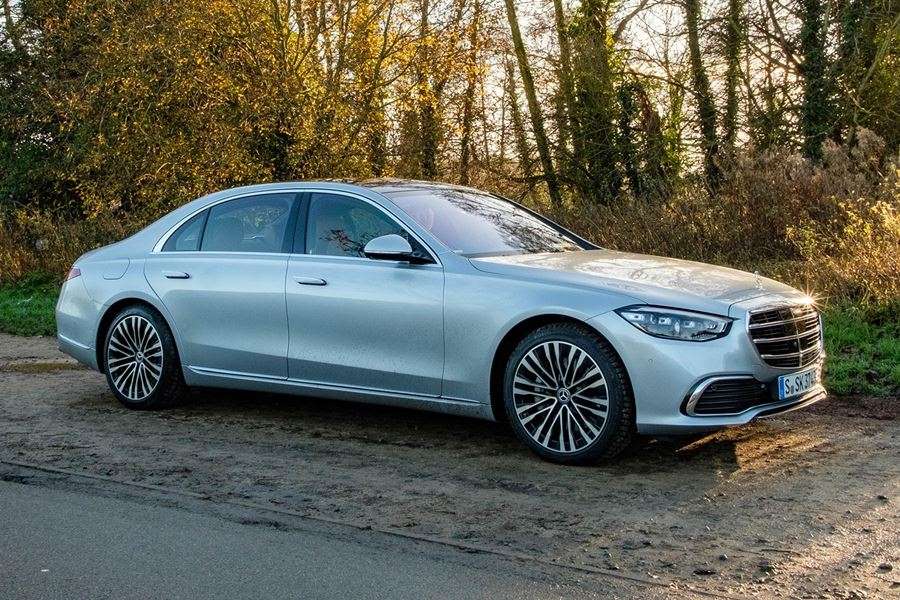 Even the entry-level AMG Line model is well equipped, coming with 19-inch wheels, air suspension with self levelling, keyless-go with seamless door handles, Intelligent LED headlights, parking package with reversing camera and power closing doors and bootlid. Move up the range and start plundering the options list at the sky's your limit.

You can order an S-Class now, with deliveries set for later in the spring of 2021 – with the diesel S 400 d version offering the fuel consumption, and the S 500 giving the quickest performance, as you'd expect. But on paper, the gap between petrol and diesel has closed considerably. The gamechanger will be the plug-in hybrid S 580e, which is due to go on sale late in 2021. 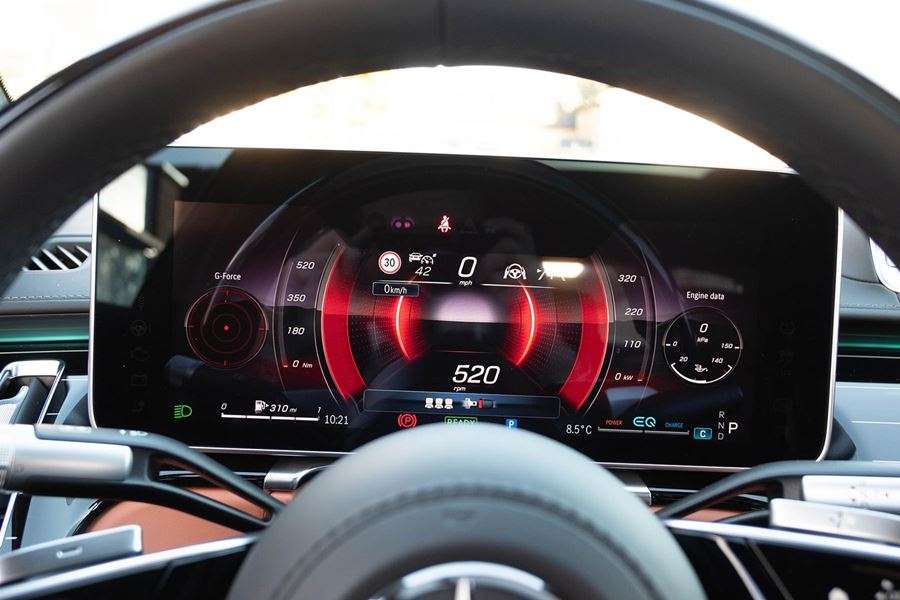 Don't expect your local Mercedes-Benz dealer to be offering discounts any time soon, as it's so new and interest is running high. The number of cars coming to the UK will be limited so as to keep a firm control on supplies. We'll know more about reliability and ease of running as the year unfolds, but we don't expect it to be much different to the last S-Class, which was held in high regard in that respect.

Published in Mercedes
Tagged under