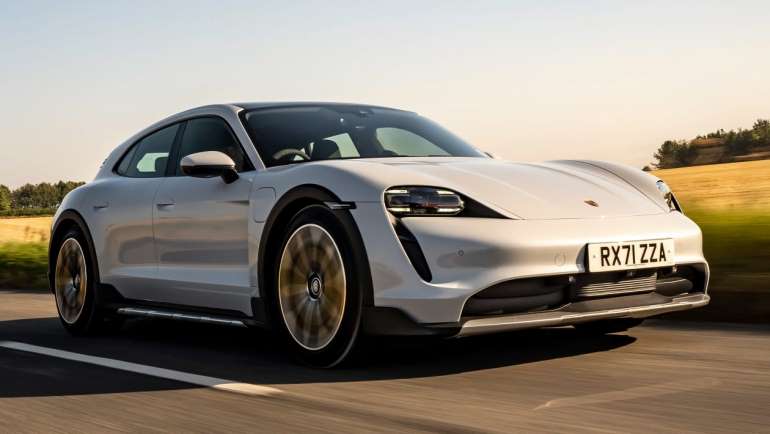 With a lower price tag and more boot space, the all-electric Porsche Taycan 4S Cross Turismo is the perfect all rounder

There are very few chinks in the armour of this more affordable Porsche Taycan 4S Cross Turismo. It’s still more than fast enough, handles beautifully, balances this with plenty of comfort and refinement, and offers plenty of tech. It’s still a pricey machine in isolation, but the quality of the driving experience, the interior and the technology live up to expectations – and in a more practical estate body style with even more comfort, the Taycan has never been so appealing. 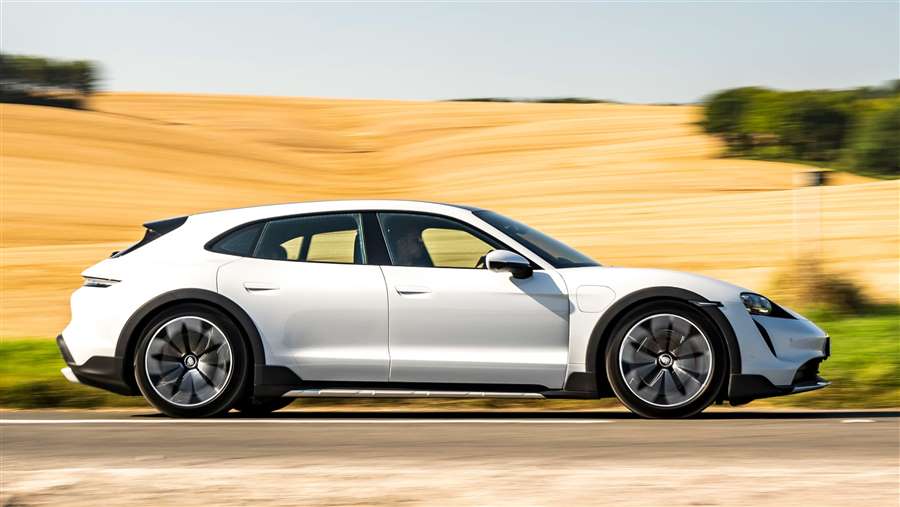 We’ve sampled Porsche’s more practical, slightly more rugged Taycan Cross Turismo electric car in high-performance (and pricey) Turbo form, but as is the way with the German brand, more affordable models always follow close behind – and so it is that we’re driving this less powerful ‘4S’ version of the Taycan Cross Turismo. 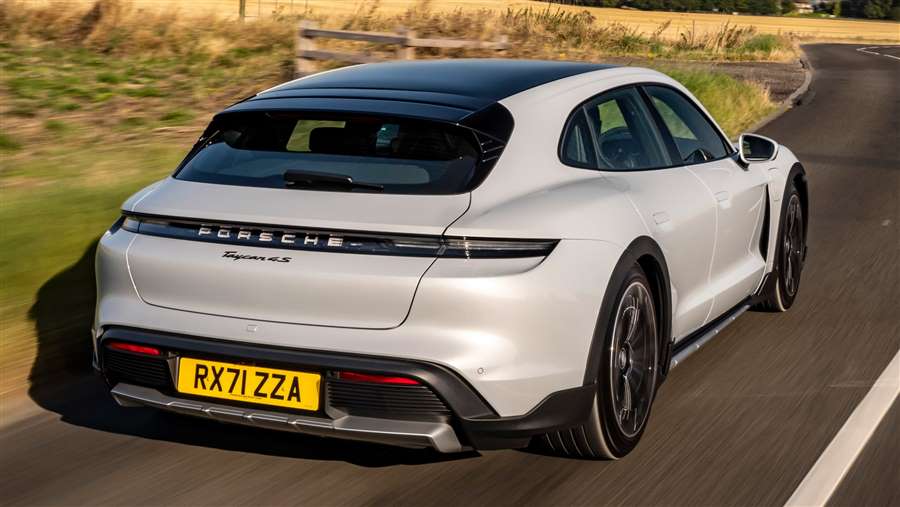 For that price you still get the 93.4kWh Performance Battery Plus, which offers a maximum claimed range of 277 miles. With up to 270kW DC charging capability, if you can find a point fast enough, a five to 80 per cent charge will take less than 23 minutes thanks to the Taycan’s 800v electric architecture. You can also opt for a 22kW AC on-board charger for an extra £1,179, but given an 11kW charger is standard, we wouldn’t bother.

You lose some performance compared with its more powerful siblings, but with a maximum of 563bhp on overboost (483bhp otherwise) and 650Nm of torque for a 4.1-second 0-62mph time, we can’t imagine needing to go any quicker in a 2,245kg raised-up estate car. Besides, given the instant deployment of that torque to both axles, there’s no waiting turbos to spool up or revs to rise to peak power as you get in a combustion-engined car, so you’ve overtaken the vehicle in front of you before a petrol model would have even kicked down. Or so it seems. 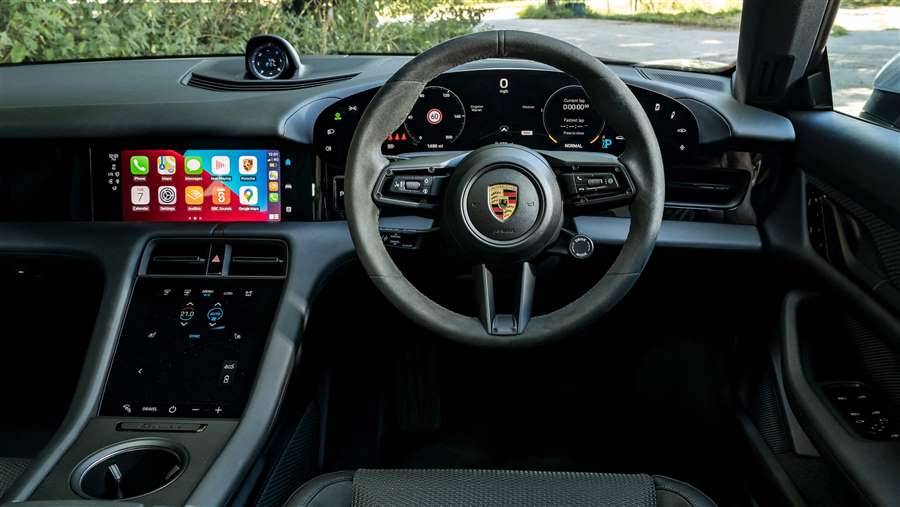 The mid-speed punch is still incredibly rapid and is controlled by a chassis that is sublime. It proves electric cars needn’t all be the same to drive; the Taycan in all its forms reinforces that EVs can have character and be enjoyable, and in the Cross Turismo it’s even better. This stems from the slightly raised ride height, by 20mm compared with the standard Taycan saloon, or 30mm on our test car that was equipped with the £1,161 Off-road Design Package.

This extra suspension travel for the adaptive air system means that, even on 20-inch alloy wheels, the Porsche rides beautifully over torn country roads and at low to medium speed in built up areas, where the near-silent powertrain also means refinement is excellent. In fact, even on the motorway the Taycan is superbly quiet – doubly impressive given the Cross Turismo has a big hatchback compared with the standard saloon.

Sometimes at higher speed over sharp crests in the road the suspension’s fluidity breaks down, causing a noticeable thump, but this is rare – and even when it does the Cross Turismo controls its weight relatively well. You’re always aware of its mass, but the chassis contains it and delivers reassuring handling; only when you really start to push does the car struggle to cope. And the Cross Turismo does invite you to push, because the steering is the best of any electric car. All Taycans offer a wonderful weight, beautifully direct response and even a hint of feedback. 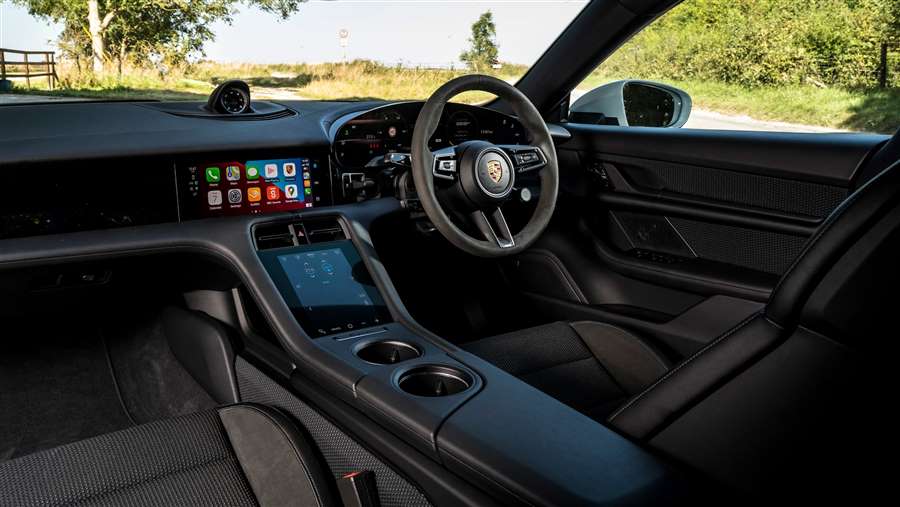 There is one drawback to its dynamic ability though. While the power delivery is mostly smooth, if you ask for maximum acceleration coming out of a slow corner you can feel the rear-mounted two-speed transmission drop down into its lower ratio before the Cross Turismo thrusts forward. It’s far from frustrating, but in a machine whose engineering is otherwise incredibly highly polished, it’s an odd anomaly.

This feeling of polish extends to the cabin, as like the Taycan saloon, the three-screen set-up is crisp, quick to respond and looks great. It marries this easy-on-the-eye appearance with strong functionality, too.

Unlike the Taycan saloon the Cross Turismo is more of a shooting brake estate, with a hatchback that reveals a 446-litre boot, making it a more practical option. There’s an 84-litre storage compartment in the front for charging cables, too. Space in the rear is great despite the low roofline; there’s a chunky sill to climb over, but once you’re sitting back there, head and legroom are fine.

Combined with efficiency of more than four miles/kWh over a mixed test route that explored the Taycan’s performance frequently, it’s even efficient, so at least the running costs should be easy to bear – and you can’t say that about many £90,000 estate cars with this level of performance.