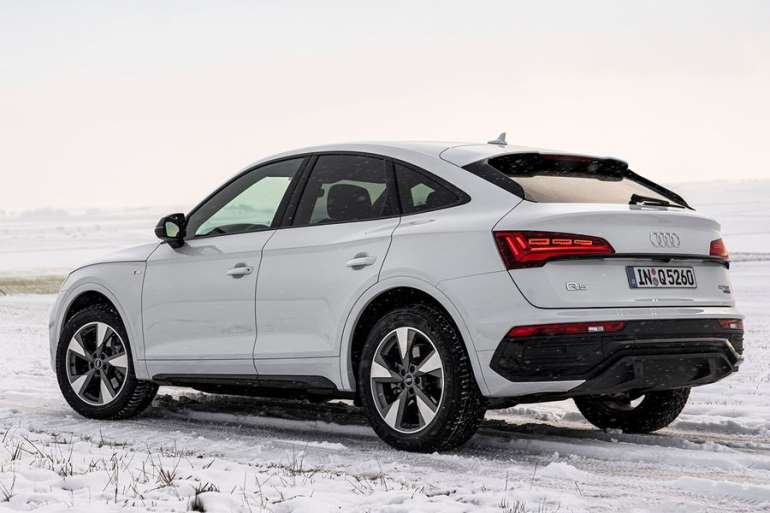 Audi has expanded the popular Q5 SUV range with a slightly sportier-looking, low-roofed variant. Predictable this model may be – but with good reason, as the less-bulky profile appeals to buyers previously reluctant to go for the boxy bulk of a traditional SUV

Taking cues from the succesful A5 Sportback, the Q5 Sportback joins the Q3 Sportback and electric-only e-Tron to give Audi customers a choice coupe-SUVs to complement their full-sized sister cars. It's a sensible recipe, too, taking the five-door practicality of the A5 Sportback and adding ground clearance and Quattro all-wheel drive on all but the least powerful model. It takes on the established Mercedes-Benz GLC Coupe, among other less direct competitors.

What's new about the Audi Q5 Sportback?
Although much of the Q5 Sportback's engineering and technology is shared with the regular Q5, no-one buys a sporty-looking SUV like this hoping they won't be noticed. Audi's drawing attention to the new model with a new lighting technology, OLED rear lights. 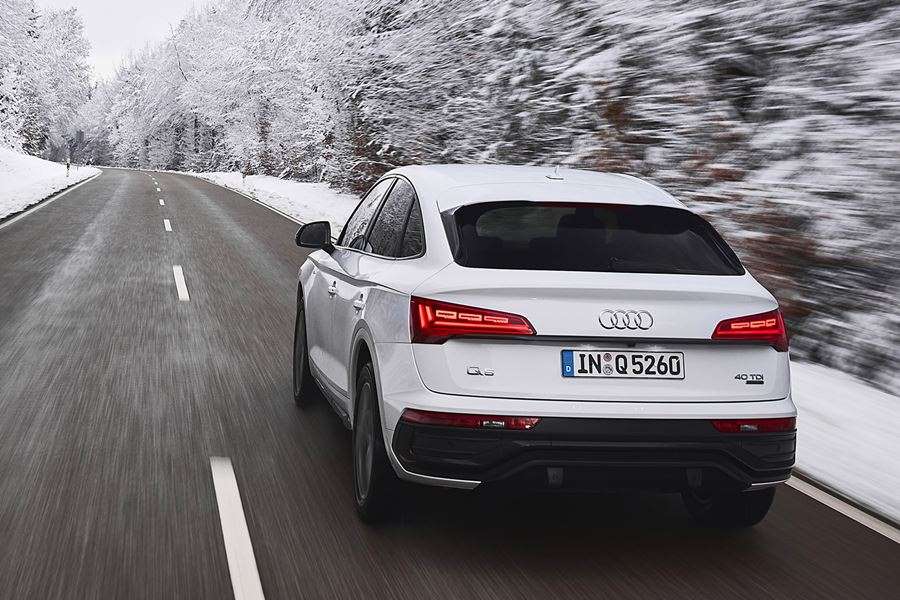 These multi-segment units don't just use a bright, low-power technology (the same technology you'll find in high-end smartphone screens) for shattering the darkness. Different patterns and configurations are possible, with a safety system ensuring your driving-mode signature becomes a full set of illumination as cars approach from behind.

If you thought dynamic indicators had helped Audi stand out on Britain's motorways, this new animated tail-light tech should really grab you. Even without the fancy showcase, OLED lighting is more consistent and even, ensuring that light signature is clear from every angle.

What's under the skin?
There are no surprises here - the Q5 Sportback offers a 2.0-litre diesel or 2.0-litre petrol (more details below). Both are four-cylinder units with 204hp available in the diesel. Diesel models make use of twin-dosing AdBlue selective catalytic reduction (SCR), which in other Volkswagen group cars and vans has proven very successful in reducing real-world NOx output.

Emissions will be further reduced with two plug-in hybrid models when they come on stream later. Care more about performance than your green credentials? There's a diesel-powered SQ5 Sportback too.

Sharing technology with the Q5 means a wide variety of options, including standard, adaptive and air suspension - the latter can raise the car by 45mm for dirt roads, and lowers it by 15mm for improved economy at speed. Steel springs are set up for a sportier feel than the standard Q5, further assisted by optional adaptive dampers and optional dynamic steering. Speaking of options, there are up to 21 different designs of wheel available, from 18- to 21-inches. 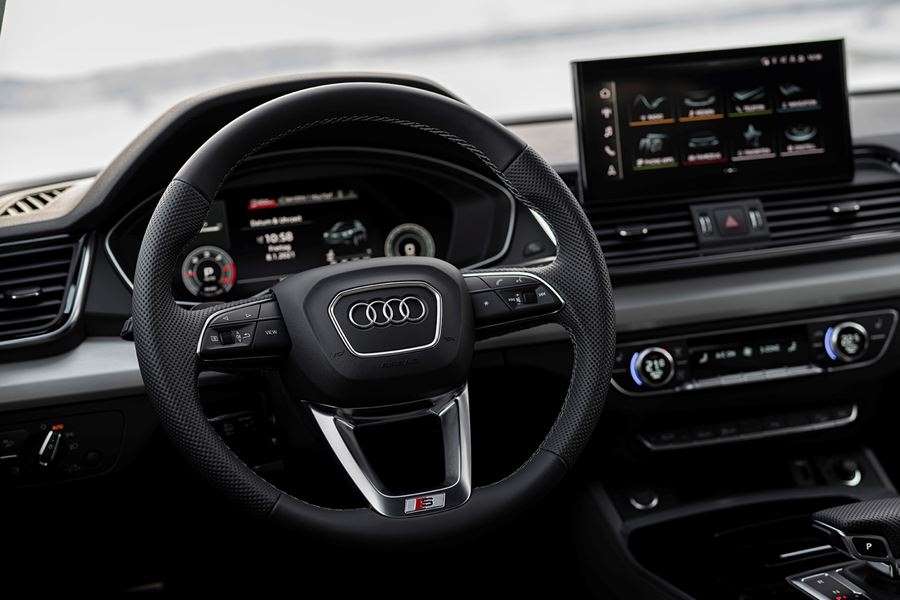 Audi's well-regarded MMI - MultiMedia Interface - has been revised and the Q5 Sportback benefits from the latest updates including an infotainment touchscreen with handwriting recognition, improved voice control and comprehensive steering controls.

Mounted in the centre of the dashboard, the main display is 10.1-inches. Ahead of the driver Audi's now-familiar 12.3-inch Virtual Cockpit benefits from the latest developments including hazard warning messages, information about obstructions in the road and traffic-flow awareness to help plan journeys with the least amount of interruptions.

The low-roofed Q5 Sportback is a roomy car and can carry 1,480 litres of cargo with the seats folded. With them raised, the luggage area is 510 litres – on models with the optional bench this can be increased to 570 litres at the expense of rear legroom.

What's it like to drive?
Unsuprisingly, the Q5 Sportback is very similar to drive to its Q5 Cousin. We sampled the range briefly in Germany and can report that it is a refined and effortless cruiser as you'd expect it to be. Sadly, it's not perfect – the V6-powered 50 TDI lacks response away from the lights, and despite e-boost from its mild-hybrid system, it's hesitant to take off, and in busy situations it can feel dreadfully sluggish.

The good news is that the 45 TFSI and 40TDI are not similarly affected. Also, regardless of which engine you choose, there is absolutely nothing wrong with the way these Sportback models handle and ride. On 19-inch wheels, it's stable and planted on the road with unwavering accuracy whatever the surface conditions. In low-grip conditions, the grip and poise is particularly impressive.

The most sporting SQ5 model is very impressive all round, with bags of performance. Despite weighing a portly 2085kg, it will sprint from 0-62mph in 5.1sec from 0-62mph and tops out at a limited 155mph. It's a mild hybrid that can regenerate up to 8kW under braking and will coast with the engine off for up to 40 seconds. Handling and ride are both excellent, too.

Buyers who venture off-road on a regular basis should consider the height-adjustable air suspension together with the side-to-side rear sport differential. Not surprisingly, the air springs also further cushion the ride, lower the body a tad at speed and have the rear end kneel down by 55mm to facilitate loading and unloading.

There's also a 265hp 2.0-litre four-cylinder turbo petrol engine (the 45 TFSI) – but it will get more interesting (and tax efficient) once the two plug-in hybrids join the range later in 2021. All models have an automatic transmission system, regardless of whether they are front- or four-wheel drive.

Should you buy an Audi Q5 Sportback?
If you're a regular Audi Q5 buyer and fancy something sleeker, here's your next car. It's a class act, mechanically and in terms of fit and finish, but it's not perfect. Although it's a mild hybrid, it feels like a step behind its PHEV rivals and will look old-hat compared with the upcoming all-electric Q6 E-Tron.

We've yet to try it against its immediate rivals, the BMW X6 and Mercedes-Benz GLC Coupe, but the Audi's classy interior and wide range of petrol and diesel engines stand it in good stead – even if it's likely to lag behind the BMW for steering feel and handling.

It's another premium, sporty-looking SUV so you can sit high up, feel safe, and still have a car with more kerbside appeal than a large box on wheels. As it inherits technology and styling from the rest of the Audi A5/Q5 range, it's a known quantity both for reliability and comfort, and for making the right impact on your neightbours when you get it home.

It's more expensive than the car it's based upon and Audi feels its customers will be prepared to pay the premium. The Q5 Sportback is a safe buy, and one that will remain in demand new or used as the UK heads towards the ban on new petrol and diesel car sales, and the SQ5 Sportback is quite a sendoff just as the e-Trons start to take over...