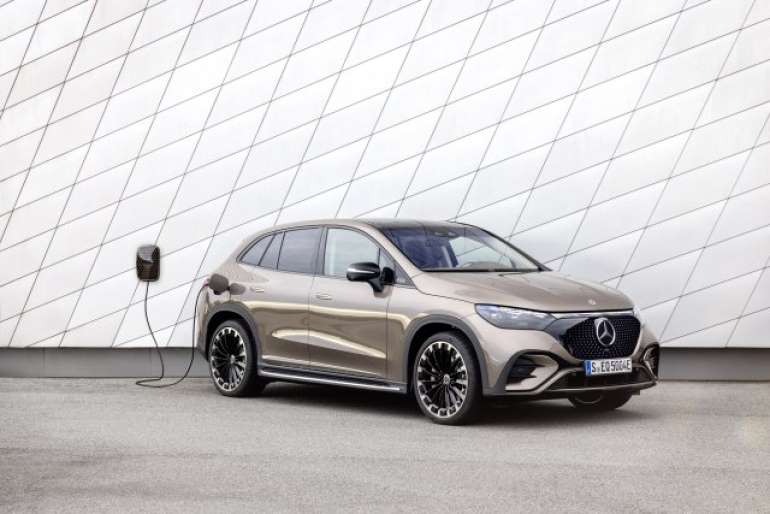 The Mercedes EQE SUV is a versatile alternative to the EQE business sedan.

Like the Mercedes EQE sedan, the new electric SUV is available with the basic innovations of the EQS model and at the same time is more dynamic than the EQS SUV model.

Mercedes says that the EQE SUV is one of the most spacious representatives of its class. Still, with a 3,030 mm wheelbase that's nine centimeters shorter than the sedan, it's more compact than the EQE sedan.

As the fourth model, following the EQS and EQE sedans, as well as the EQS SUV, the EQE SUV uses a new mechanical platform designed for three-pointed star electric vehicles.

The modular drive concept enables the EQE SUV to offer a wide range of maximum total power outputs from 215 to 300 kW. Depending on the equipment and configuration of the vehicle, the European variants of the vehicle can have a WLTP autonomy of up to 590 kilometers. 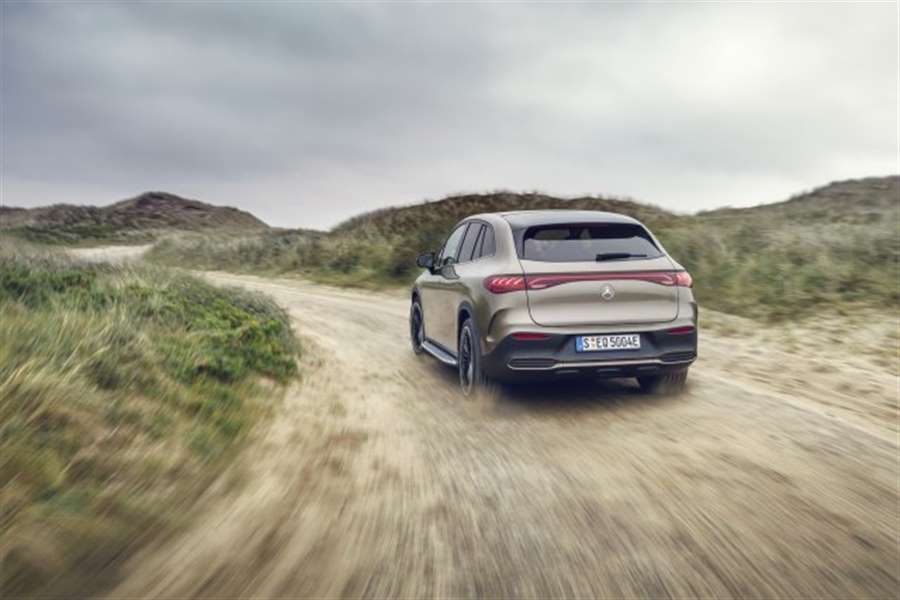 In the EQE SUV, the lithium-ion battery consists of ten modules. In certain cases, the company's innovative battery management software can be updated over-the-air (OTA).

The current generation of driving assistance systems includes a number of functions that support the driver.

Additional options are available in the Assistance package, as well as in the Driving Assistance Plus package.

Due to the relatively short wheelbase of 3,030 millimeters and the appropriate suspension settings, Mercedes claims that the car is particularly nimble and manageable even with the basic setup.

AIRMATIC air suspension with ADS+ continuously adjustable damping is available as an optional extra. To increase the ground clearance, the vehicle level can be raised by up to 30 millimeters.

In addition to the DINAMIC SELECT programs ECO, COMFORT, SPORT and INDIVIDUAL, EQE SUV models with the 4MATIC all-wheel drive system also have an OFFROAD program for off-road driving.

A rear axle steering system with a maximum steering angle of 10 degrees is available as an option. 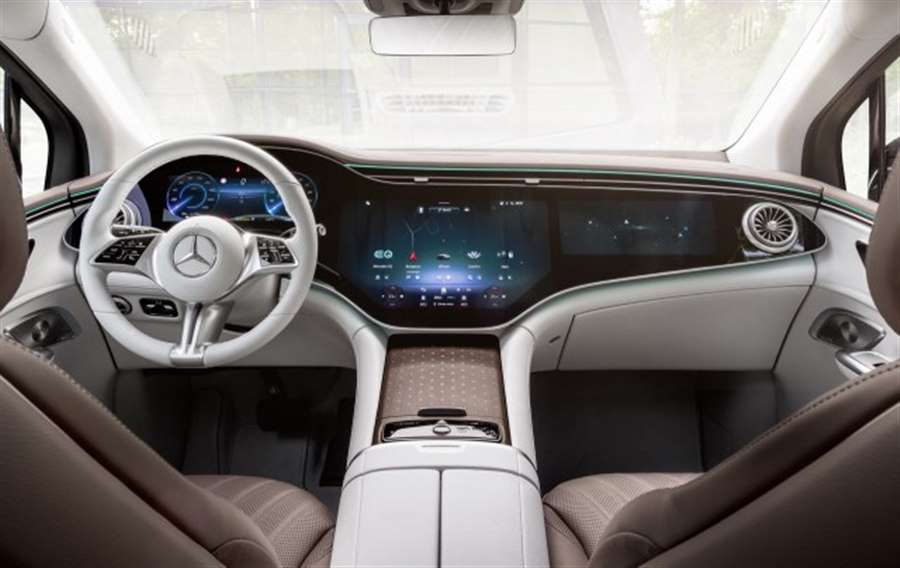 With customizable software, the MBUX display and operating system make personalized suggestions for numerous infotainment, comfort and vehicle functions. The highlight of the interior is the optional MBUX Hyperscreen.

With the MBUX Hyperscreen, the three displays merge almost seamlessly to create a screen range over 141 centimeters wide.

The front passenger in the EQE SUV has the option of a 12.3-inch OLED display with its own user interface.

The system uses intelligent camera-based blocking logic that recognizes whether the driver is looking towards the passenger display. If this is the case, the system automatically dims the dynamic content for security reasons.

When it comes to navigation with "electric intelligence", the name says it all. Because based on numerous factors, it plans the fastest and most convenient route including charging stations.

It also reacts dynamically to traffic jams or a change in driving style, for example.

Navigation with electric intelligence is smart; calculates estimated charging costs per charging stop. In addition, the user can individually edit the planned routes. 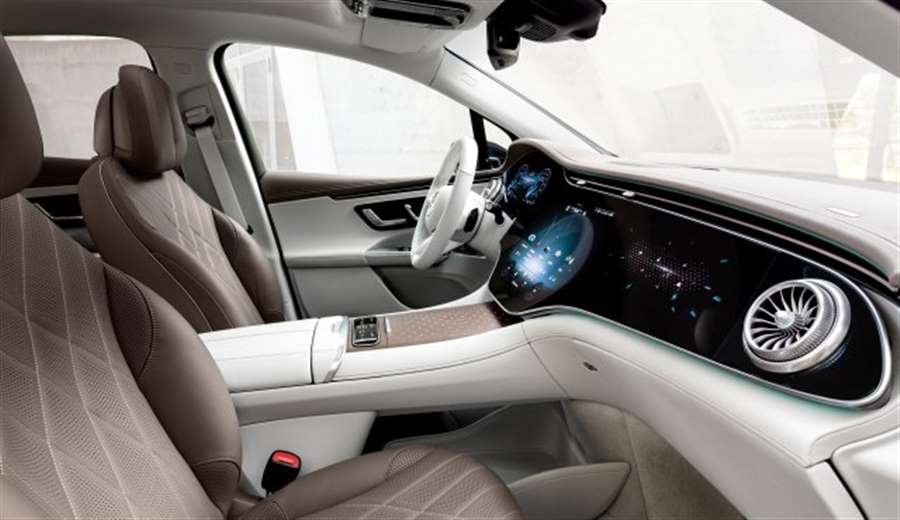 The Mercedes EQE SUV has a sophisticated thermal architecture with a heat pump as standard. This makes the system work very efficiently: excess heat from the electric drive (inverter and electric motor) as well as high-voltage batteries that would otherwise be released into the environment can be used to heat the interior.

This drastically reduces battery consumption for the heating system, thus increasing the range.

Another useful and efficient function is air conditioning control before departure. The THERMATIC automatic climate control system with two climate zones is standard in the vehicle, while THERMOTRONIC with four zones is available as an option.

From June 2022, Mercedes me Charge offers three new charging tariffs in Europe that are tailored to individual driving performance.

With the introduction of a new, transparent tariff system, fixed prices that are valid regardless of the operator are partially available to customers. With the Plug & Charge function, the EQE SUV can also be easily charged.

The DIGITAL LIGHT headlight technology (special equipment) enables innovative functions, such as the projection of auxiliary markings or warning symbols onto the road.

Another highlight of the equipment is the ENERGIZING AIR CONTROL Plus. The HEPA (High Efficiency Particulate Air) filter cleans the incoming outdoor air at a very high level of filtration. ENERGIZING COMFORT connects the various comfort systems in the vehicle.

Individual ENERGIZING COMFORT programs allow a special program for good mood depending on the mood or needs of the user. This improves physical comfort and performance while driving and during breaks.

The Dolby Atmos sound format raises the audio experience in the EQE SUV to a new level, according to Mercedes.

The proportions of the EQE SUV combine function and aesthetics with the sporty character of an SUV.

Wheels in sizes from 19 to 22 inches are mounted flush with the outer edge of the body.

The EQE SUV shares some aerodynamic measures with models from the same family. The chassis with numerous aerodynamic details plays a central role in the very good drag value Cd of 0.25, which is achieved despite the large cargo volume and short rear overhang.

But the dimensional concept with the flat windshield, broad roofline and recesses were also important factors.

The principles of Integral Safety apply regardless of the type of drive system. Like all other Mercedes Benz models, the EQE SUV therefore has a rigid passenger compartment, special deformation zones and state-of-the-art restraint systems.

The European version of the EQE SUV can detect whether the rear seats are actually occupied. If the passenger in the back is not wearing a seat belt, the driver receives a special warning. The so-called passenger presence reminder can indicate children in the back of the vehicle.

In vehicles for Europe, Australia, New Zealand, USA and Canada, this system is fitted as standard.

Mercedes will initially offer three versions of the EQE SUV.

It is followed by the EQE 350 4Matic with 4-wheel drive and two electric motors. It is interesting that the total power is the same as in the rear-wheel drive model (292 hp), but the maximum torque is higher thanks to the additional electric motor and is 765 Nm.

CO2-neutral production as part of eco-balance

Production of the EQE SUV will begin in December at the Mercedes-Benz plant in Tuscaloosa, Alabama (USA).

A battery plant in nearby Bibb County supplies batteries for this model as well as the EQS SUV.

As of this year, all Mercedes-Benz passenger car and van plants worldwide have achieved CO2 neutral production as part of their environmental balance – including the two Mercedes plants in Alabama.