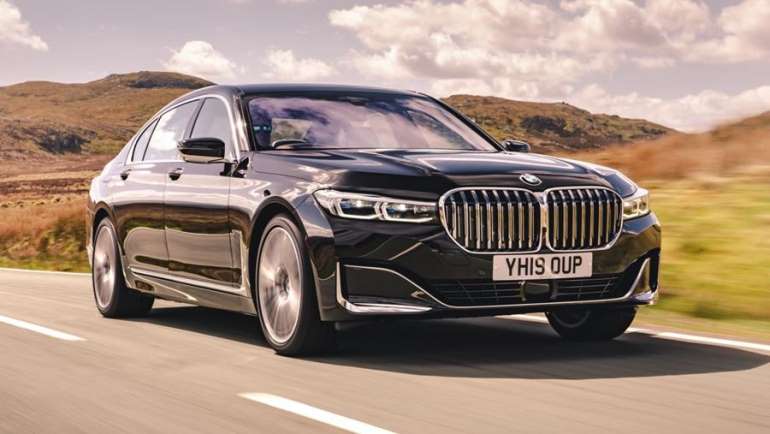 This is the sixth-generation of the BMW 7 Series luxury saloon and arguably the most identifiable, thanks to its bold new face. BMW clearly decided its conservative flagship saloon needed to stand out against the stately Mercedes S-Class and forward-looking Audi A8, increasing the size of its kidney grille by around 40%.

Elsewhere the makeover is far less dramatic, with slim new headlights and a full-width LED rear light-bar representing the most noticeable changes. It also has a smoother overall look and has been tweaked to suit the Chinese market, where more than a third of all 7 Series are sold. 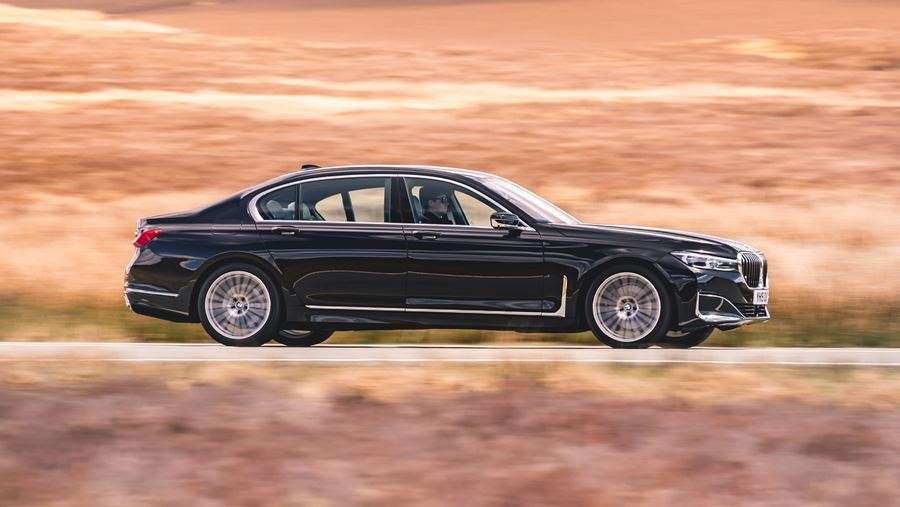 The interior has also been reworked with a light touch, leaving most of its design intact but revisiting the tech on offer. The start of the show is BMW's latest infotainment system, bringing digital instruments and an updated tablet that passengers in the back can use to control the car's interior features.

Depending on its expected use, the 7 Series can be specified with a standard or long wheelbase to boost passenger space, along with either a bench rear seat or two-seat 'lounge' setup. The latter brings the full VIP experience, with individual seats that are heated, cooled and reclining either side of a centre console.

For a car that doesn’t sell in huge numbers, there's a wide range of engines, spanning from a plug-in hybrid model to diesels, and even a flagship V8 petrol. Every 7 Series is quick and supremely comfortable, but the range-topping petrols are also powerful for a large saloon, and the BMW has a sportier edge than the Mercedes S-Class. 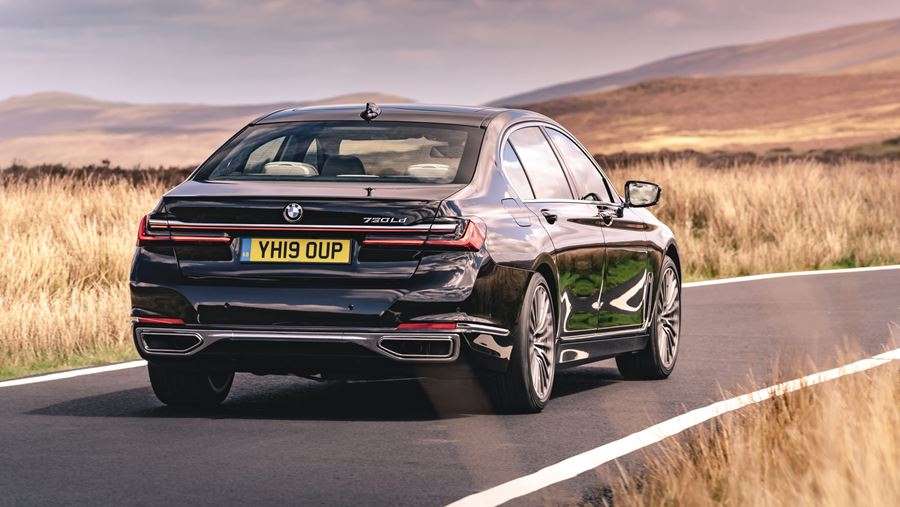 Thanks to the breadth of the BMW 7 Series' engine range, there should be a version to suit every customer and location. We say ‘location’ because the plug-in hybrid 745e will bring real advantages in terms of taxes and charges if the owner drives into cities like London with low-emission zones and tariffs.

For this reason, the 745e plug-in hybrid is popular thanks to its CO2 emissions from 41g/km and fuel economy of up to 156.9mpg. The exact economy you get will depend on how often you can charge its battery pack and make use of its 28 mile electric range, but its fixed emissions figure gives the car free access to city centres with low-emission zones. A low Benefit-in-Kind (BiK) company-car tax will also appeal to business users.

The 7 Series’ standard petrol models are considerably pricier to run. The 740i returns up to 35.8mpg and emits from 180g/km, while the hugely powerful 750i xDrive returns little over 25mpg and sits in the top BiK tax band for business drivers.

Diesel engines are still very popular for the 7 Series, and the 730d will especially suit high-mileage drivers. Fuel economy of up to 51.4mpg is pretty impressive given the BMW's size, but emissions from 144g/km (with the smallest alloy wheels fitted) mean it still sits in a high BiK tax band. The 740d still returns 47mpg despite posting a very quick acceleration time and getting four-wheel drive. It features mild-hybrid technology with a small battery that stores the energy harvested from braking and deceleration, which is then used to give the engine a boost helping to improve fuel economy and emissions. 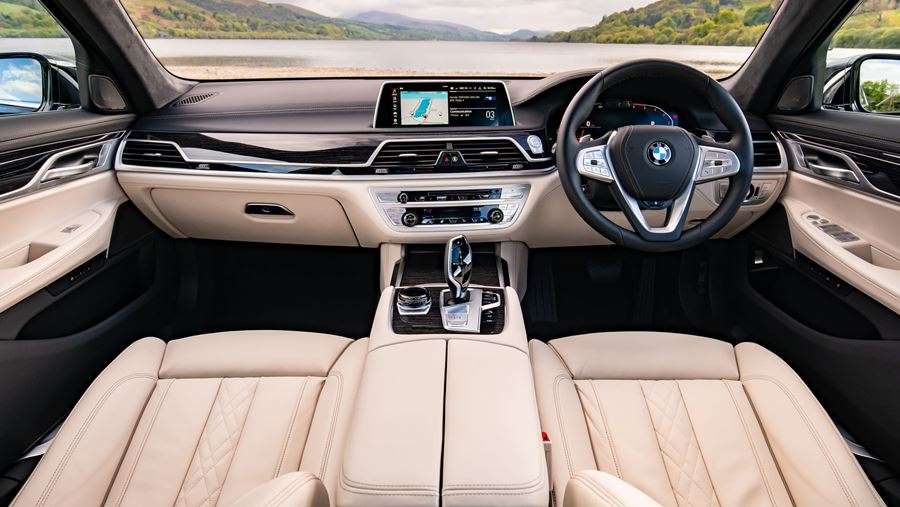 Insurance groups
Insurance groups for the BMW 7 Series saloon are high because of how much it costs, the complex engineering and high performance. Even models lower down the range, such as the 740i are in insurance groups 48 or 49. Every other model, including all long wheel variants and even the 745e hybrid, sit in the top insurance group 50.

Warranty
All BMW models come with a three-year warranty that's typical amongst the German brands, however it does also have unlimited mileage within this period.

Servicing
BMW offers servicing packages that can be purchased when the car is new, covering maintenance for a fixed cost for a set period of time, for up to five years, which can also be transferred to subsequent owners.

Servicing packages can also be extended to include consumable items like brake pads, discs and a new clutch for an extra charge.

While still comfortable, the BMW 7 Series is a bit more involving to drive than most large saloons

Unlike most BMW models, the 7 Series favours a plush ride over sporty handling, but it still feels lighter on its toes than the Audi A8 or Mercedes S-Class. This is partly thanks to use of a carbon fibre 'core' running through its underpinnings, which helps save weight and increase structural stiffness. 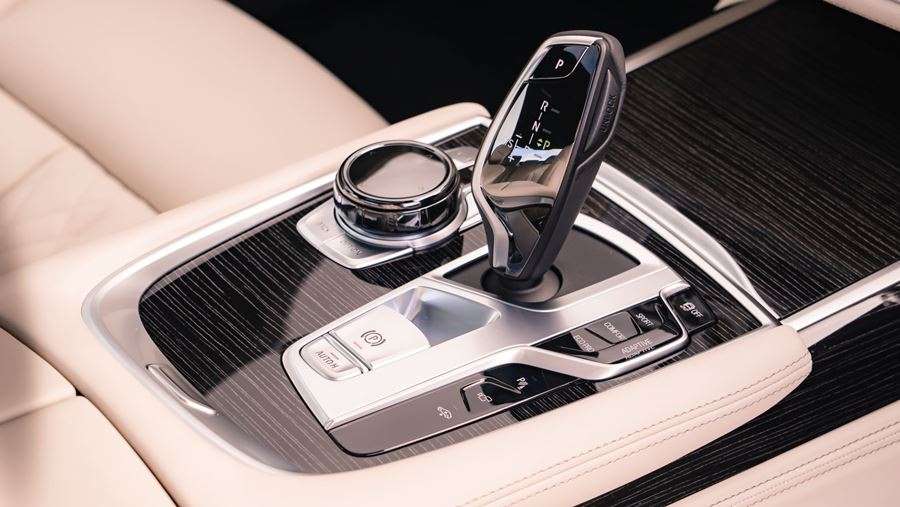 In any of its driving modes and any scenario, the 7 Series is incredibly comfortable. We found the normal Comfort mode to be the best all-round setting; Comfort Plus makes the air suspension even softer, but this can make the body feel a little wayward on demanding roads, so is probably best left for the motorway.

BMW 7 Series diesel engines
There are two versions of the same 3.0-litre straight-six diesel, and the BMW 730d has traditionally been the bestseller in Britain. It has 282bhp and manages 0-62mph in 5.9 seconds when equipped with rear-wheel drive, with the xDrive four-wheel drive version taking 5.6 seconds. The more powerful four-wheel drive 740d gets 335bhp, and manages to get from 0-62mph in only five seconds. BMW’s mild-hybrid technology is fitted to both models, which provides an extra 11bhp overboost under full throttle to aid acceleration.

Petrol engines
The petrol line-up consists of one relatively normal straight-six, and two much more expensive to run, powerful and exotic engines. With 328bhp, the 740i engine is shared with models including the BMW 3 Series and BMW 5 Series, and still proves spritely in a bigger vehicle, getting the 7 Series from 0-62mph in 5.5 seconds.

Hybrid engines
While the 730d has long been the most popular model, a shift away from diesel and heavy taxation means the 745e plug-in hybrid is likely to win favour with business buyers - who make up the bulk of 7 Series customers. It combines a six-cylinder petrol engine with an electric motor and battery pack, providing an electric-only driving range of up to 28 miles. Zero-to-62mph takes a fraction over five seconds. 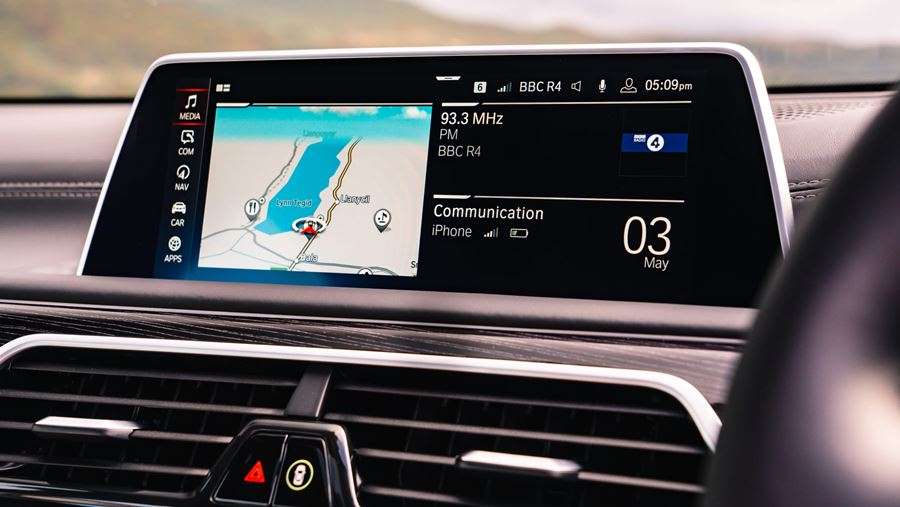 Aside from its grille, the BMW 7 Series and its rivals are known for being conservative, and the interior hasn't changed too much from its predecessor. Of course, technology has been bolstered, so every gadget you can think of is standard or available as an option.

BMW 7 Series dashboard
While it looks pretty similar, there's a new set of digital instruments that can show much more information to the driver. Materials have also been updated to keep the 7 Series near the front of the pack, with every surface covered in leather or wooden trim, including oak and polar.

Choose the 730d and so much is included you'd be hard pressed to tell it's officially the entry-level model. A Harman Kardon stereo, adaptive LED headlights, powered boot, wireless phone charging and a key with its own display are all standard.

BMW 7 Series saloon - infotainment 17
In-car technology doesn’t disappoint either, with all models coming as standard with the ‘Connected Package Professional’. This includes Remote Services, which allows you to send destinations, find your vehicle or even keep an eye on your 7 Series’ surroundings via your smartphone. A remote 3D view generates an up-to-date 360-degree image around the car so that you can see it even when you’re not near it, using the BWW Connected App. Other features include Connected Navigations, Concierge Services and Apple CarPlay. 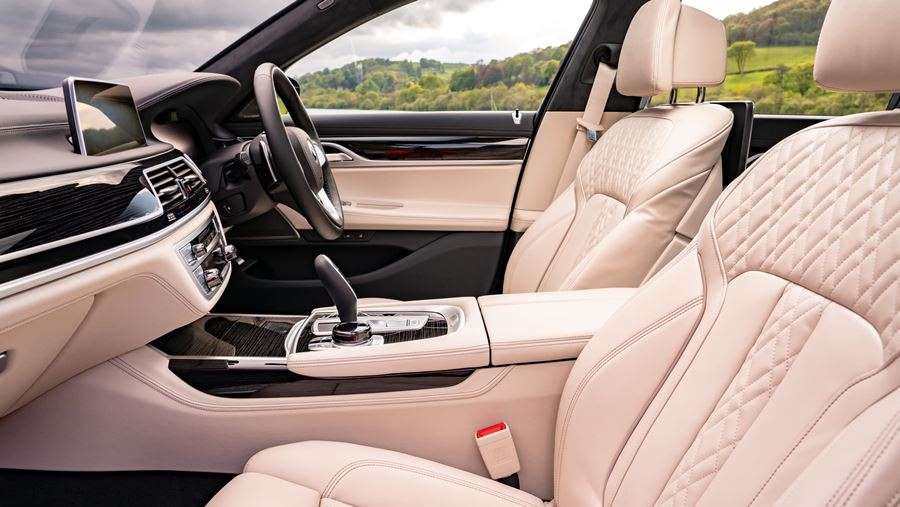 The M Sport trim gives the 7 Series a more athletic look inside and out, capped off by unique alloy wheels, while the M760Li xDrive flagship is essentially its own trim level, with just about every option included.

Options
It's hard to believe you'd need to add a Comfort Plus Pack, but do so and it brings massaging and ventilated seats, scented air and laminated glass designed to help regulate the interior temperature and add soundproofing. A Technology Plus Pack adds driving aids, remote control parking and a head-up display, while the Rear Seat Comfort Plus Pack upgrades the back seats for first-class luxury by adding heated seats and two 10-inch screens on the back of the front seats along with a Blu-ray player and TV.

The BMW 7 Series saloon has been designed to carry adults in ultimate luxury from the outset, and the latest version is 22mm longer than before. Choose the long-wheelbase version and it gains a full 14cm of additional length, providing even more room for rear passengers to stretch out and sleep on the move.

BMW 7 Series interior space & storage
In standard form, the interior of the 7 Series offers a generous amount of room for both front and rear passengers. Travelling in the rear seats though, is more like first-class air travel than squeezing into the back of a hatchback. That's especially the case if you specify the individual executive lounge rear seats rather than the standard three seat rear bench. 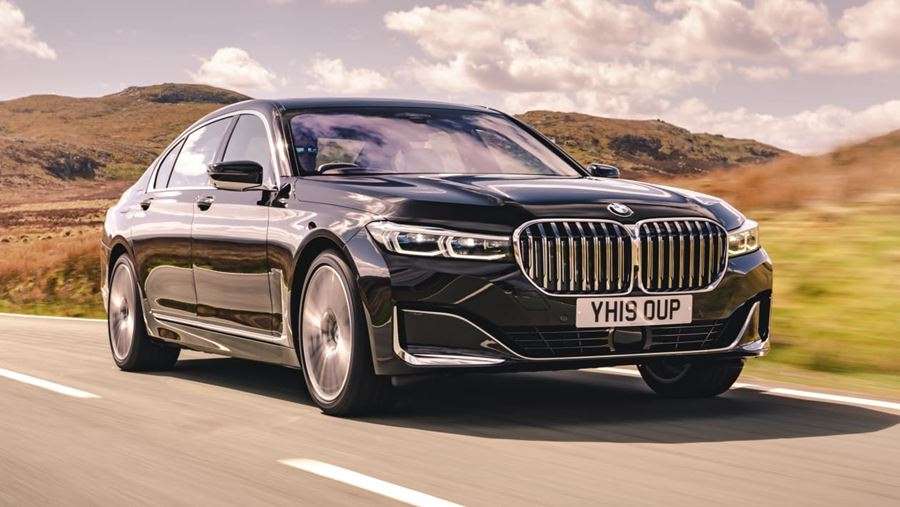 Opt for the extended long-wheelbase version of 7 Series and the rear passenger space is extended further still, meaning that while in transit, you can enjoy a film, work or have a nap. This can be complemented by electrified rear and side window sunblinds and the optional BMW Touch Command, which adds a capacitive touch sensor to control the rear interior lighting. Even more space can be afforded by pressing a button to move and tilt the front passenger seat out of the way.

Boot space
The powered boot lid opens to reveal a large 515-litre boot (10 litres more space than the Audi A8), providing plenty of room for suitcases or golf clubs. Due to the onboard battery in the 745Le plug-in hybrid, boot space is reduced to 429 litres. Those opulent rear seats don't fold down, though, so you can't expand the space.

Towing
While you're unlikely to ever see a 7 Series towing a trailer, its 2,300kg capability means it would actually be rather adept at the task.

The BMW 7 Series is a hugely complex car, but a decent manufacturer's warranty should allay many fears. It's also laden with safety technology.

BMW 7 Series reliability
It can be daunting buying a car with as much technology and equipment as the 7 Series, but it’s covered by an unlimited-mileage warranty for the first three years. Because this model is essentially a thorough facelift of the previous version, a lot of the new model's underpinnings have also been tried and tested.

Its smaller sibling, the 5 Series, came 40th in our top 100 cars rated by owners in the 2020 Driver Power satisfaction survey. It seems that BMW owners aren’t happy with the running costs, which include high insurance premiums and servicing bills. Surprisingly, BMWs are getting worse than average reviews in the ride and handling and acceleration categories.

Safety
While it's unlikely to be tested by Euro NCAP because of its status as a luxury car sold in small numbers, we'd be amazed if the 7 Series didn't get a five-star result. After all, it's BMW's flagship saloon and a showcase for the brand’s latest safety technology. That includes myriad systems to help warn you of, and even help avoid accidents.

Onboard safety technology includes BMW’s Parking Assistant Plus which is capable of taking control of the car steering and brakes to park the car automatically in parallel or perpendicular parking spaces. This functionality can also be operated via the BMW Display key, with the driver outside the car. Other safety features include the optional Driving Assistant Professional system, which uses a series of cameras and radar to guide the car as you drive, and includes lane change assistance, and can even stop you if you attempt to drive down a one-way street the wrong way.

Tagged under
More in this category: « The Next 2024 BMW i8 M: Preview, Specs, and Prices BMW i4 Gran Coupe Preview »