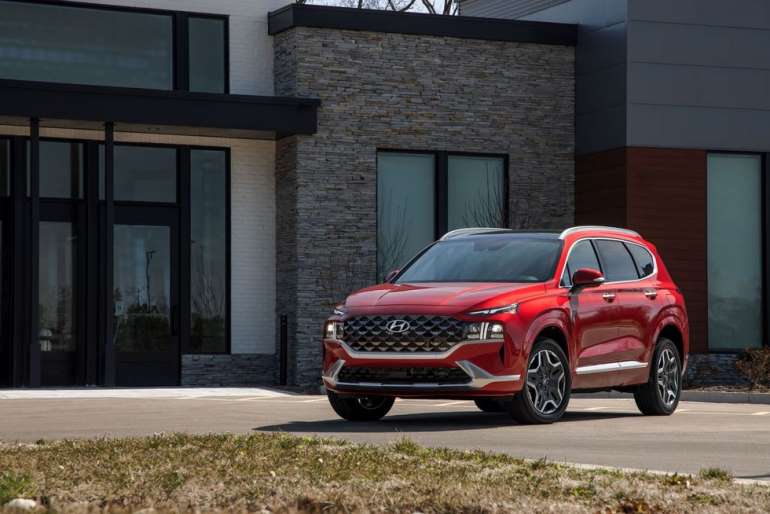 It is hard for a car lover to get excited about the two-row mid-sized crossover segment. And although we're not happy to admit it, unexciting and practical is exactly what a lot of car buyers want and need. Speaking of need, while we were on our way back from a Costco run in the 2021 Hyundai Santa Fe, we spotted a BMW Z3 with the top down and a massive, framed poster riding shotgun. The driver probably has more stories to tell about that Z3 than most crossover owners, but while we were looking enviously at his roadster, he probably cast a wanting eye on our practical and spacious Santa Fe. It's also entirely possible he never saw the Santa Fe as his poster was blocking most of the view to his right. 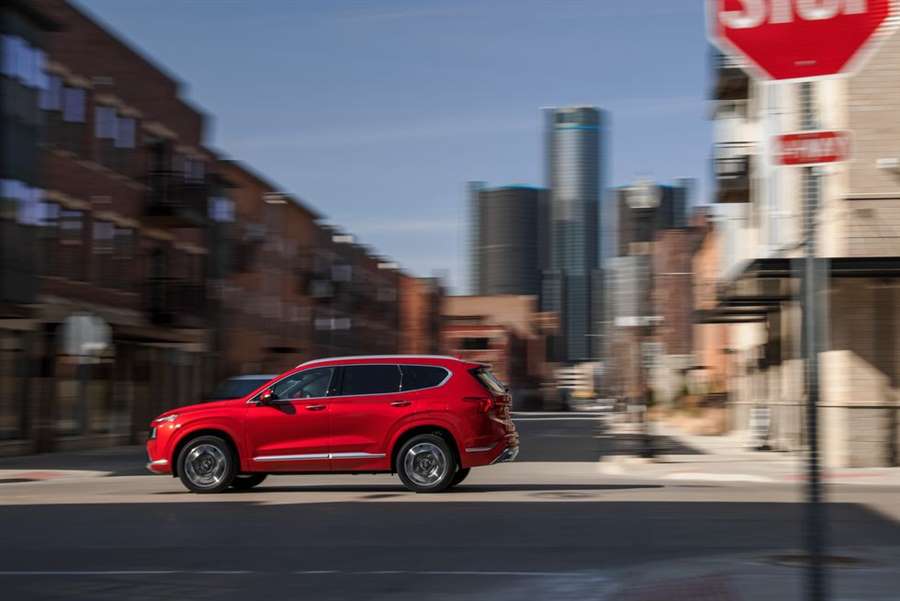 While a five-passenger near-luxury crossover may never be what we daydream about, so far in 2021 the Santa Fe has been Hyundai's second-bestselling vehicle, only a few hundred units behind the Tucson, Hyundai's slightly smaller crossover. Hyundai's compact Elantra slightly outsold the Santa Fe in 2020, but its sales are down 26 percent compared to the first two months of 2020. If crossovers are to be Hyundai's future, the recently redesigned Santa Fe is a fine emissary. 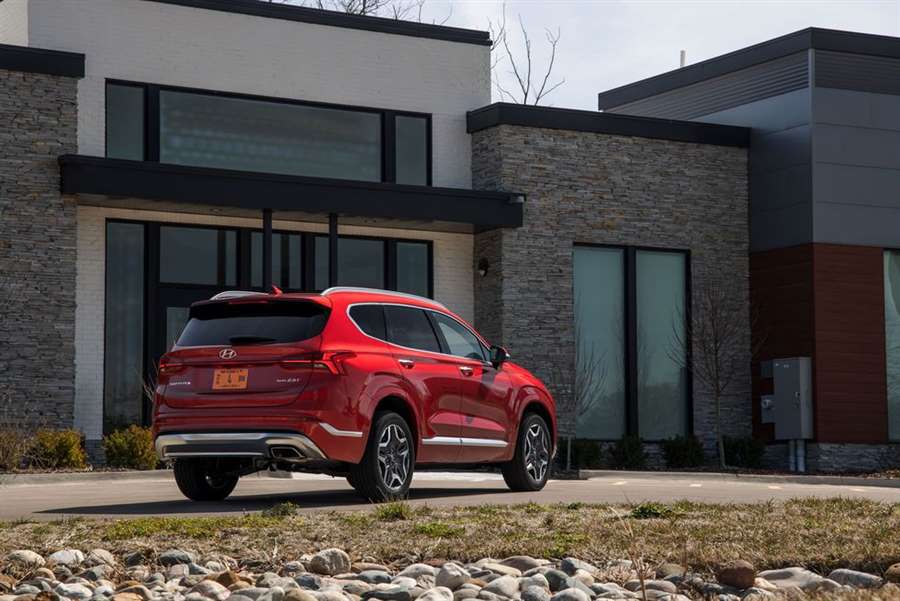 The Santa Fe starts at $28,035 for the base SE with front-wheel drive; all-wheel drive adds $1700. From there the rungs climb through the SEL and Limited before reaching the top-shelf Calligraphy. The $43,440 Calligraphy model that made the rounds in the office came packed with standard features. The only extra was a $155 set of carpeted floor mats. Hyundai introduced the high-spec Calligraphy trim level in the Palisade, and now it is trickling down to the Santa Fe. Calligraphy adds quilted leather seats, a panoramic roof, all the driver-assistance technology inattentive drivers crave including lane-keeping assist, blind-spot monitoring, and an adaptive cruise-control system. 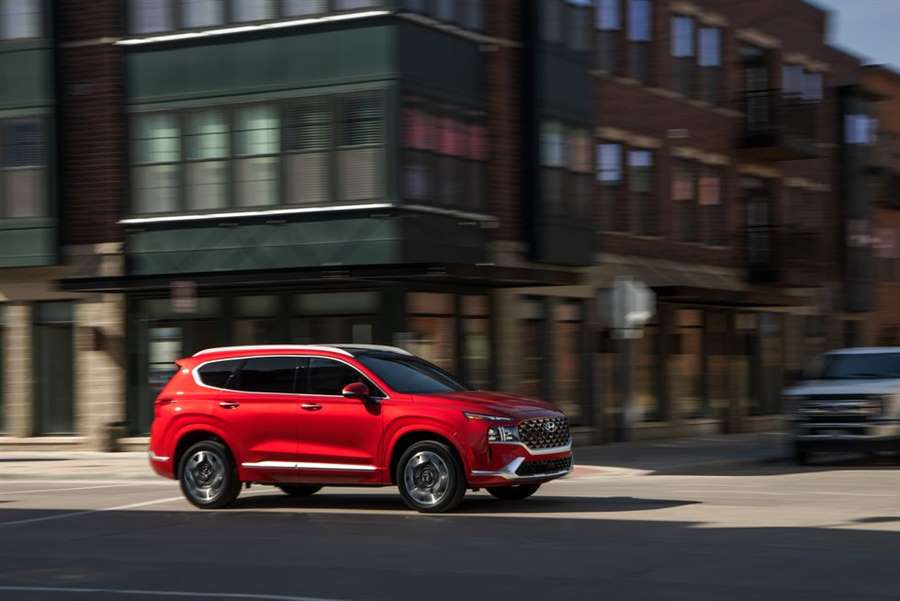 The front seats are supportive, and there's plenty of space to store small items, including a dedicated slot for your phone. But the new push-button shifter will take some getting used to.

The rear seat isn't as pleasant a place. While the legroom is good, there's a lack of headroom for anyone approaching six feet. The second row is outfitted and trimmed just as nicely as the first row, but the panoramic roof removes 1.2 inches of headroom. There's ample cargo space, and the Santa Fe will easily support a trip to the picture-framing shop or the luggage of four road-tripping folks. 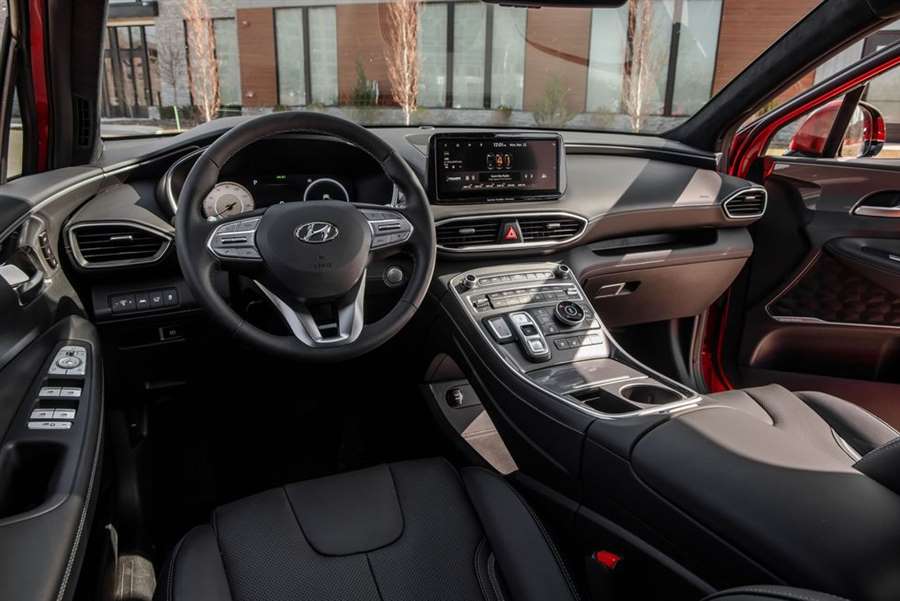 A 277-hp turbocharged 2.5-liter four-cylinder is standard on Limited and Calligraphy models, lesser Santa Fes have a 191-hp naturally aspirated 2.5-liter four. The turbocharged engine has 42 more horsepower than the previous gen's turbocharged 2.0-liter four. The new turbo-four and the eight-speed dual-clutch automatic transmission work together seamlessly. Runs to 60 mph take a quick 6.0 seconds, and the transmission readily downshifts and helps the Santa Fe move from 50 to 70 mph in 4.1 seconds. That sprint to 60 mph is just behind the 280-hp Honda Passport's 5.8-second dash and noticeably quicker than the 6.8-second effort we recorded in a Ford Edge Titanium with a 250-hp turbocharged 2.0-liter four. 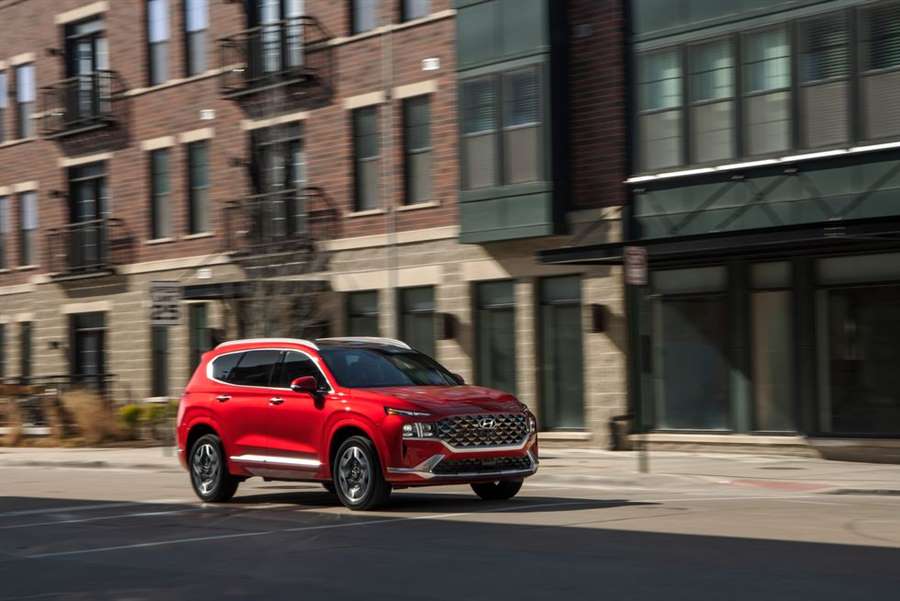 At the track, we measured 0.81 g overall on the skidpad, which bests the Passport's 0.78 g of lateral stick but trails the Edge's 0.83. The Santa Fe's steering is heavier than the numb and lighter steering in many crossovers. On the highway, there are no dead spots or latency to speak of. It's no Alfa Romeo, but it's responsive and a victor in this segment. The ride can tend towards jittery depending on the road, and you may catch the rear seatbacks jiggling along in the rearview mirror. Our tester arrived with 19-inch wheels rather than the 20s that most Calligraphy models will have in the future, so the 20s might be even harsher. If you'd like your Santa Fe set up that way, too, act fast. Hyundai is selling 19-inch versions as a "limited availability" variant of the Calligraphy, and you'll get a $200 discount for forgoing the bigger wheels. Hyundai hasn't explained why the 20s aren't out yet, but our money is on supply-chain disruptions. 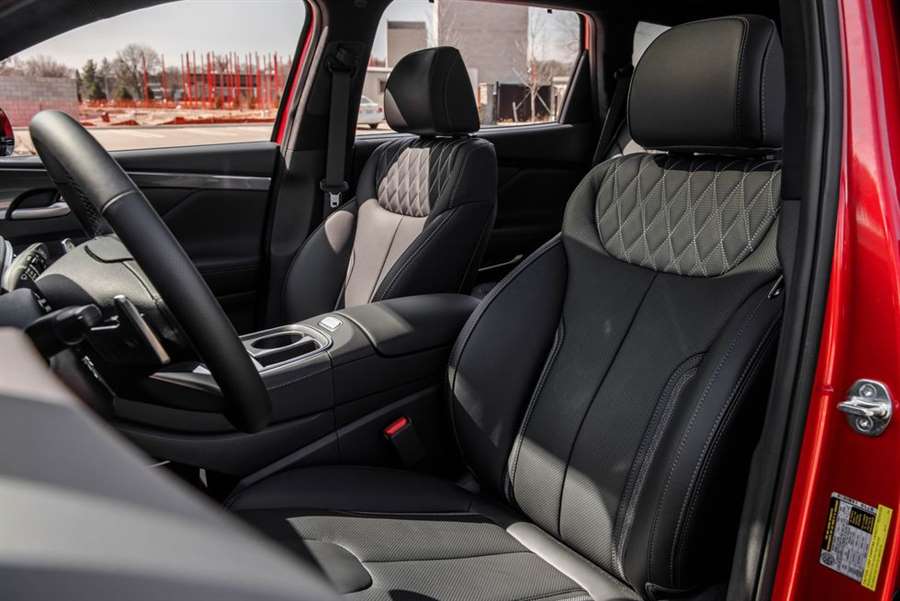 With the cruise set at 75 mph, the Santa Fe returned 27 mpg over a 200-mile highway drive, a single mpg shy of the EPA's estimate. And over almost 400 miles of real-world driving (much of it around town but some of it on uncongested highways), it returned 20 mpg, one short of the Santa Fe's EPA city rating. A Passport returns EPA numbers of 19 city and 24 highway, and an Edge with the 2.0-liter turbo comes in at 20 city and 28 highway.

The worst mid-size crossovers are dull and soulless enough to sap your soul. The Santa Fe is different. Its exterior design is original and attractive. Aside from the occasionally jittery ride, the Santa Fe drives and behaves in a refined and almost engaging manner. We've yet to sample the naturally aspirated Santa Fe or the new hybrid powertrain, but based on what we know of the rest of Hyundai's product portfolio, they're probably nicer inside than their price tags suggest. Every car in this segment asks buyers to make sacrifices in the name of convenience, but the Santa Fe demands less and gives more than many others in its class. If you're not ready for or don't need the Palisade and Telluride's three rows, the Santa Fe should get you home from the framing shop without drawing too much attention.