“In the Kona N, Hyundai has created another fantastic performance model - one that makes a great alternative to a Volkswagen T-Roc R”

The standard Hyundai Kona isn’t our favourite car in its class but the Kona Electric is one of the best electric cars on sale. The Kona range is now even broader and better with the introduction of the Hyundai Kona N, a high-power, performance-focused model. Despite the car industry moving towards electrification, Hyundai still sees a place for fast and loud petrol cars for enthusiasts to enjoy. 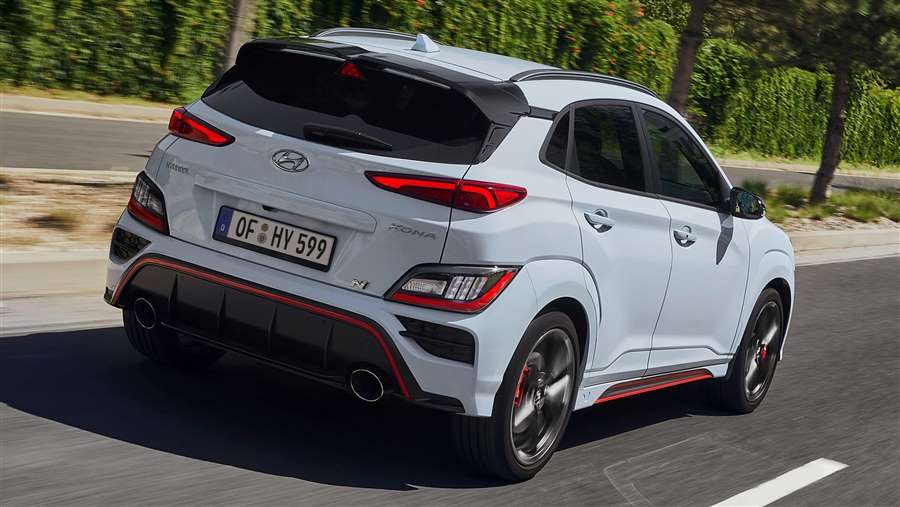 The world of fast small SUVs wasn’t very heavily populated until relatively recently but now the Volkswagen T-Roc R, BMW X2 M35i, Audi SQ2 and MINI Countryman JCW are all fighting it out for supremacy. There’s also the more affordable and less powerful (but no less fun) Ford Puma ST. Hyundai has found a gap in the market directly between these cars, making the Kona N more powerful than the Ford but less expensive than all its other rivals.

The car’s 276bhp 2.0-litre turbo petrol engine is shared with the Hyundai i30 N, as is most of the rest of the running gear. The i30 N is one of our favourite hot hatchbacks, so the recipe is a good one and sets the Kona N up well. A 0-62mph sprint can be done in 6.4 seconds, unless you engage launch control, in which case it’s just 5.5 seconds. This makes the car easily quick enough to mix with its rivals, despite the Kona N only coming with front-wheel drive. 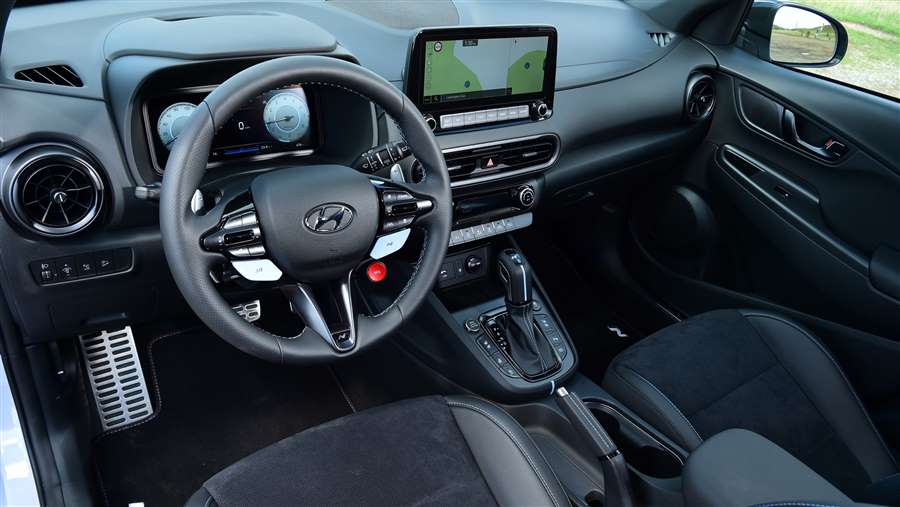 The N buttons on the steering wheel let you increase the firmness of the suspension and sharpen the throttle response so you can corner more quickly. There’s also an NGS button that’s short for ‘N Grin Shift’, which provides an overboost function to give you short spells of extra power.

But the Kona N allows you to dial back the performance with a slightly bewildering range of driving modes (even ones for mud and snow). Sticking it in Eco or Normal will make the car feel little different to a standard Kona and the ability to calm things down suits the car’s slightly raised driving position.

The Kona N has joined the range as part of the model’s facelift, so it feels fresh and modern inside. Digital dials are standard, as is a new 10.25-inch touchscreen, while a smattering of specific badges and stitching choices elevate it above the regular Kona. The price of the N may look high compared to entry-level versions of the Kona but you get a huge amount of kit as well as the performance, such as a head-up display, a premium sound system and heated and cooled electrically adjustable seats. 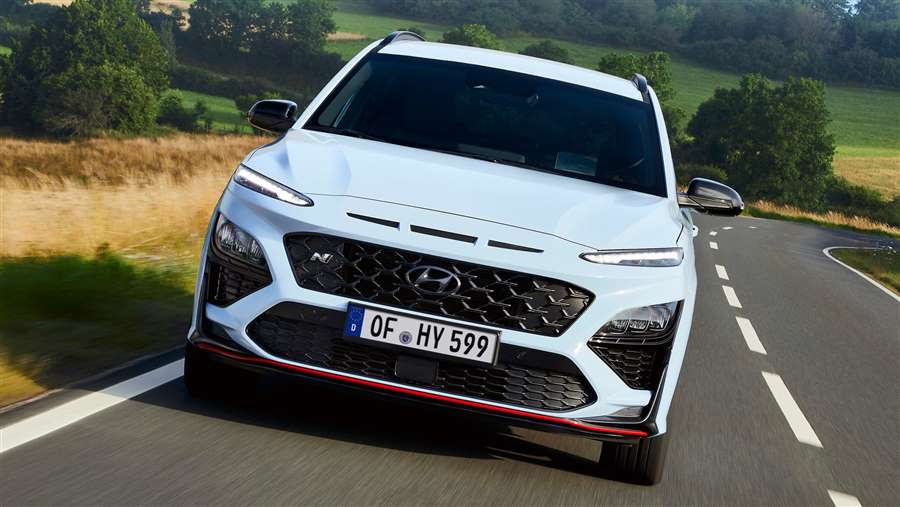 While the Kona N does share its running gear with the i30 N, it’s slightly more expensive, slightly less practical and doesn’t come with the option of a manual gearbox like the i30 N does. We can’t imagine any of these will be major issues if you like the Kona’s driving position and styling, however.

The Hyundai Kona N is thirsty, just like its rivals 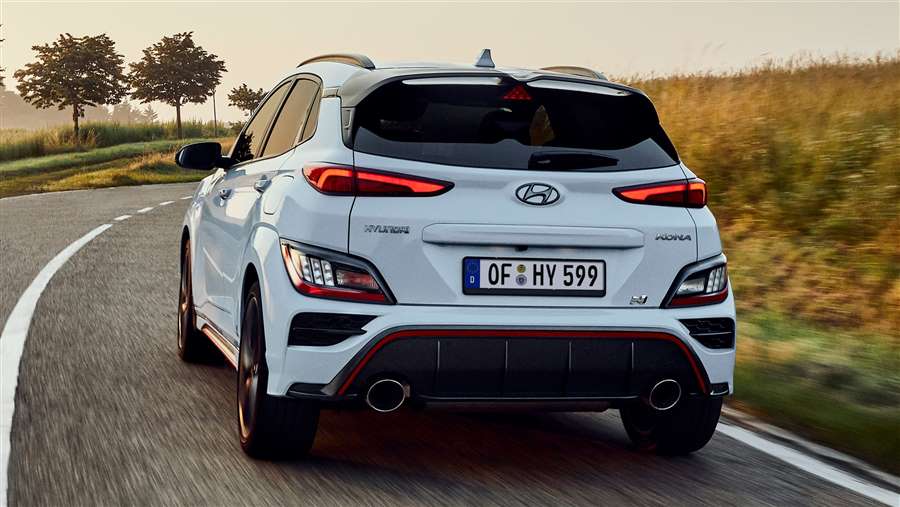 More often than not, the trade-off for a powerful petrol engine is poor fuel economy - and that’s exactly the case here. While the Kona Electric and hybrid models are focused on efficiency, the Kona N certainly isn’t. It’ll achieve up to 33.2mpg at a steady cruise and much less if you drive it enthusiastically. In fact, use all of the car’s performance all of the time and you could end up travelling fewer miles on a tank than you’d get from a full charge in the electric model.

Whether you pick the Kona or another fast SUV like the Volkswagen T-Roc R or BMW X2 M35i, that’s about as efficient as a performance SUV gets. However, because the Kona doesn’t breach £40,000 like many of its rivals, private buyers will only pay the standard rate of tax per year. It almost goes without saying that the Kona N will be costly to run for company-car drivers, as its 194g/km CO2 output puts it firmly in the top Benefit-in-Kind band.

Still, a five-year unlimited-mileage warranty means the Kona N should prove easy to live with. Your dealer should also be able to arrange a pay-monthly service plan to do away with unexpected bills. 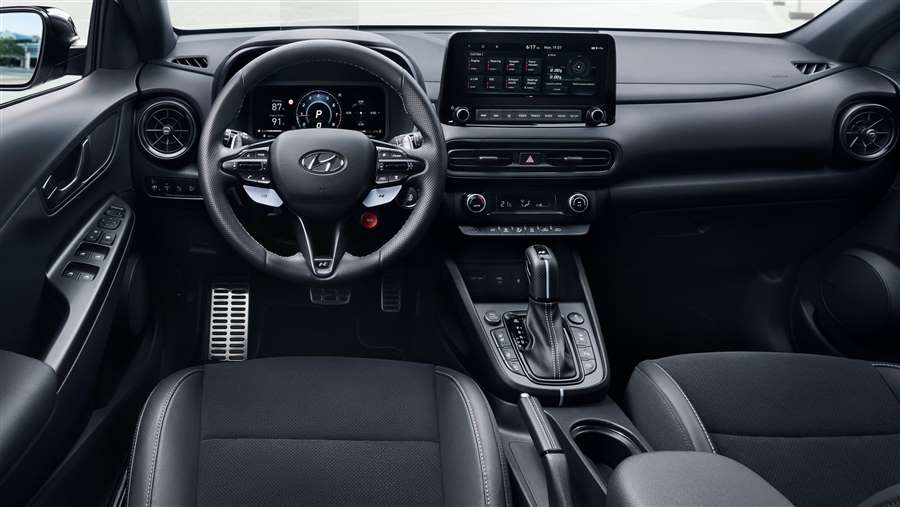 The Hyundai i30 N was the brand’s first hot hatchback but Hyundai’s relative lack of performance-car experience meant nothing; the i30 N shot to near the top of the hot hatch class. The smaller, Ford Fiesta ST-rivalling Hyundai i20 N is also excellent, and the Korean company has done it again with the much-anticipated Kona N.

Just like the i30 N, the Kona N uses a 2.0-litre turbo petrol engine that produces 276bhp. That enables a 0-62mph time of 6.4 seconds, or just 5.5 seconds if you engage launch control. In the past, launch control was reserved for supercars and sports cars but now you’ll be able to surprise people with a perfect launch in your small SUV. The Kona is only available with an eight-speed dual clutch automatic transmission, whereas the i30 N is also available with a manual gearbox. We’d like the option of the six-speed manual here too, as the auto gearbox sometimes struggles to find the right gear. 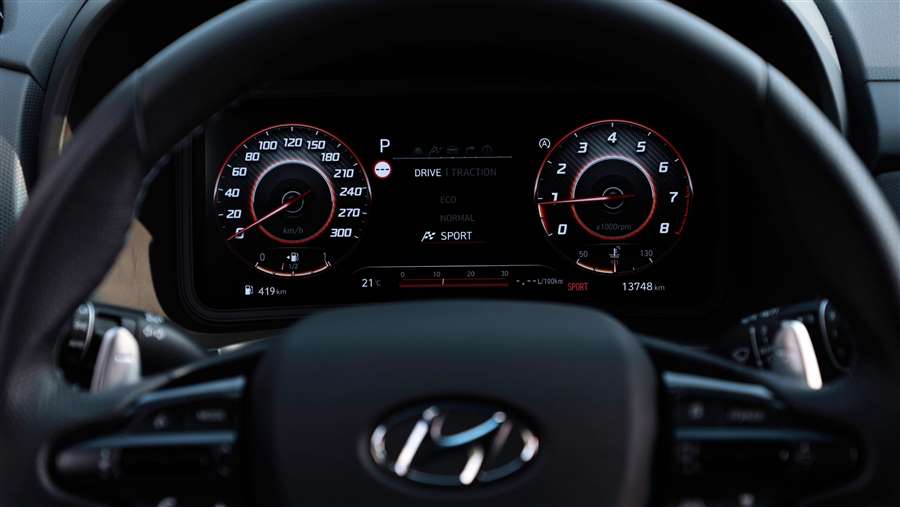 The Kona N comes with electronically controlled dampers and a differential as standard in the UK, which, again, would previously have been reserved for the very best performance cars. You can feel the differential working if you press the throttle down mid-corner, as the car tightens its line and doesn’t stray wide. It makes the car’s performance feel accessible and gives you confidence to drive faster.

There are also a wide range of driving modes, from Eco and Normal to Sport and even mud/snow settings but the sportiest setup is accessed by pressing one of the N buttons on the steering wheel. With N mode engaged, the suspension firms up and makes the Kona more agile through corners. A wider track (the distance between left and right wheels) helps reduce body roll to almost zero.

Another Kona N-specific feature is the NGS button on the steering wheel. Press this and you’ll get a hit of extra power (the full 286bhp) for 20 seconds. We can see it being useful for quick overtakes, where you want all the power without having to resort to scrolling through all the driver modes. 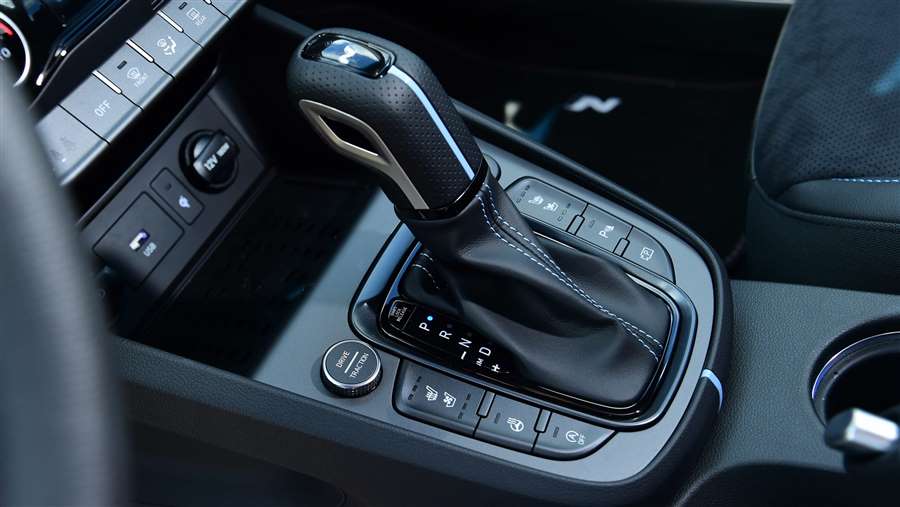 Joining the range as part of the Kona’s facelift, the N benefits from Hyundai’s very latest interior design. There’s a new 10.25-inch touchscreen on top of the dashboard and a large digital instrument cluster instead of traditional dials. The N gets a sports steering wheel with the aforementioned N buttons, plus seats trimmed partly in leather and partly in Alcantara suede.

You’ll pay less for the Kona N than its main rivals but you’ll get more equipment as standard. The front seats are electrically adjustable, heated and cooled, while the outer rear seats and the steering wheel both have heating too. There’s also automatic climate control, wireless phone charging, a head-up display and a reversing camera.

One of our bugbears with the standard Hyundai Kona is that it is far from the most spacious small SUV on sale and the N is the same in this respect. A Volkswagen T-Roc R or a MINI Countryman JCW will be more comfortable for adults in the rear seats but then you might find it’s fine if you’re not regularly bringing mates along for the ride. We’d recommend sitting in the rear seats with the driver’s seat in your position before you buy.

Many small SUVs have a surprisingly large boot - the Renault Captur offers more space than some cars in the class above - but the Kona has one of the smallest boots in the class. The N’s 361 litres isn’t terrible but the i30 N offers more rear-seat and luggage space for a lower price.

The standard Kona was the best-rated car on sale in our 2021 Driver Power owner satisfaction survey, with top scores for everything except practicality. Although the Kona N wasn’t specifically mentioned in the result, it should be absolutely excellent to live with. Kona owners love the fit-and-finish, the technology and the driving experience - and the N provides tech and performance in spades. Hyundai’s five-year warranty is more generous than its rivals too.

Euro NCAP tested the Hyundai Kona in 2017 and awarded it a five-star score, with 89% protection for adult occupants. The range-topping Kona N features a host of driver assistance technology including adaptive cruise control, lane keeping and following, front and rear collision avoidance and a head-up display.