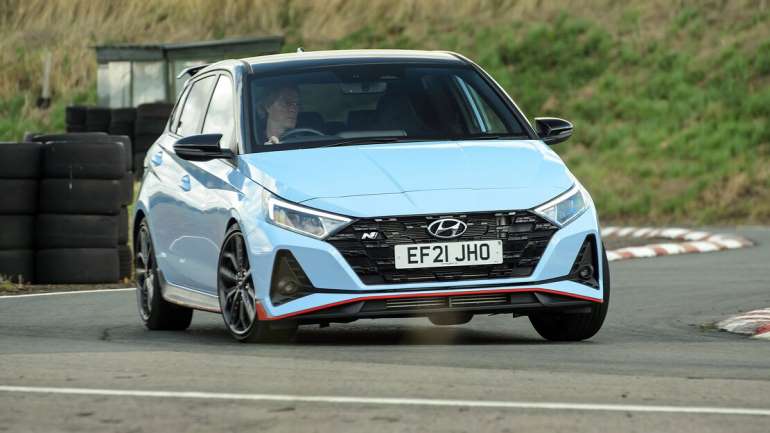 The i20 N is an absolute riot. Unfortunately, we can’t have it.

Americans have a pathological aversion to subcompact hot hatches. Mini's John Cooper Works variant of its Hardtop is the sole stateside representative of a performance car genre that's been highly successful in Europe and Asia. The entertaining Ford Fiesta ST, launched in late 2013, lasted just five years before Dearborn pulled the plug. We never even got Toyota's grin-a-mile GR Yaris, with Toyota ending the importation of even the mainstream Yaris to the U.S. And so our chances of seeing Hyundai's new i20 N on American roads are precisely … zero.

Which is a shame, because the little i20 N is the best driver's car Hyundai makes, sharper and more focused than the Veloster N, the Elantra N, and the Kona N, cars that have impressed us with their punchy performance and fun-to-drive dynamics. Indeed, the buzz in Europe is the i20 N has what it takes to shake the subcompact hot hatch crown from the current-generation Fiesta ST.

The i20 N is more than just some extra muscle under the hood, as it combines the engine's extra grunt with bigger wheels and stiffer suspension, and wraps it all in bright paint with a few aero addenda. With N division founder and former BMW M chief Albert Biermann now head of R&D for the entire Hyundai-Kia group, N models are part of the vehicle development process from the get-go, and the i20 N is one of the first fruits of this new system, arriving less than 18 months after the mainstream i20 hatch hit the market in Europe and Asia.

Regular i20s are powered by a 1.0-liter three-cylinder or a 1.2-liter four-cylinder gas engine (a 1.5-liter diesel four is available in some markets), none boasting more than 118 hp and 127 lb-ft of torque. The i20 N gets a tweaked version of the 201-hp 1.6-liter turbo four-banger found in the Elantra N Line sedan. In i20 N-spec, the engine benefits from a new intercooled turbocharger setup that boosts torque output to 203 lb-ft from 1,750 rpm to 4,500 rpm. There's also an overboost function that allows the little four-pot to muster 224 lb-ft of twist from 2,000 rpm to 4,000 rpm for short periods.

The only available transmission is a six-speed manual that's been upgraded to handle the extra torque and the shock of full-throttle launch-control starts. As with all N cars, the i20 N has a limited-slip differential, although it's a mechanical unit with a Torsen gear optimizing the torque flow across the front axle rather than a more expensive electronic diff.

In terms of the chassis setup, the spring, damper, and anti-roll rates have all been substantially stiffened. The i20 N's suspension is simpler than that of its larger N siblings; the shocks are passive, and the rear axle is a torsion-beam unit rather than multilink. The front suspension has reinforced top mounts and knuckles, however, and an additional brace in the rear load space helps keep the torsion-beam rear axle more precisely located. To cope with the increased dynamic loads—and to give the suspension a more rigid foundation—the body shell has been reinforced in 12 different places, particularly around the front subframe.

The i20 N retains the column-mounted motor for the electronic power steering system (EPS), but the steering rack ratio has been sharpened from 12.4:1 to 12.0:1, while the motor's retuned to improve its response and better counter torque steer. New front disc brakes have rotors 1.6 inches larger in diameter than those of the regular i20, and new hubs mean the i20 N's 18-inch forged wheels, shod with Pirelli P Zero tires specially developed for the car, are located by five lugs rather than the four of the regular i20.

On paper, the i20 N, with its passive shocks, torsion-beam rear axle, column-mounted EPS, and lack of a dual-clutch automatic transmission, doesn't seem as sophisticated as the bigger N cars. On the road, it's a different story.

Getting Down To Business

There's a solidity to the body structure that makes the no-nonsense tautness of the suspension feel engineered into the car, not merely bolted on. And the control weights—the lovely, mechanical throw of the gearshift; the consistent arc of the clutch; the firm, easily modulated brake pedal; and the crisp steering response—all have the smooth, measured heft you'd normally associate with something engineered in Germany, not Korea.

It's not all dour seriousness, though. "The i20 N is more of a rascal than the i30 N," Hyundai-Kia dynamics engineer Alex Eichler, who's based at the company's technical center in Russelsheim, Germany, said. He's absolutely right. This Hyundai is a lively, energetic little machine with a giant-killing personality.

The i20 N offers six different drive modes: Eco, Normal, Sport, N, and two different configurable N Custom settings that let you mix and match the settings for the engine, steering, stability control, and exhaust sound. In addition to the standard launch control system, the onboard computers will also automatically match revs on downshifts and allow you to left-foot-brake while keeping your right foot on the throttle.

In Normal mode, the i20 N is a fun little commuter car. Yes, the ride is busy—hardly unexpected in a stiffly suspended car that weighs just over 2,600 pounds and has a short wheelbase—but not uncomfortably so. And being a Hyundai, you get a lot of comfort and convenience for your money (in Europe, the i20 N is priced within a few bucks of the Fiesta ST), including a 10.3-inch touchscreen infotainment system, cruise control, and a rear parking camera.

But the real fun starts when you tap the N button and switch everything to maximum attack.

The i20 N's 1.6-liter turbo engine is workmanlike rather than charismatic, and it's happiest muscling around in the midrange. Keep the revs between 3,000 rpm and 5,500 rpm, working that terrific transmission, and the little Hyundai zings down the road, darting from apex to apex like a kart. Hyundai claims a 0-60-mph time of about 6.1 seconds and a top speed of 142 mph, and the i20 N feels every bit that rapid.

It'll only take a few miles before you thumb the red button under the right spoke of the steering wheel to switch off the rev matching. The beautifully weighted pedals are perfectly placed for neat and quick heel-and-toe downshifts, the exhaust pop-pop-popping joyfully on the overrun as you brake deeper and deeper into corners.

Crisp As A Fresh Potato Chip

The i20 N has the superlatively authoritative front end that's now a hallmark of Hyundai's N cars, reacting instantly to steering inputs and delivering truly impressive levels of grip. The little hatch rotates promptly on corner entry, the inside rear wheel cocked in the air like a dog's leg at a fire hydrant, and the mechanical limited-slip differential allows you to get on the gas much sooner than you can in almost any other front-drive car; and, contrary to what you might expect, it helps tuck the nose tighter in toward the apex.

A fast run along a twisting two-lane will have you grinning from ear to ear at the sheer audacity of it all. This Hyundai feels wonderfully agile and alert but not nervous, and there are few hot hatches that can generate its raw midcorner pace.

The i20 N is just one more reason Hyundai is the company Toyota should fear most. The mainstream Hyundai lineup is already better styled, better equipped, and, frankly, better to drive than most comparable Toyotas. With the launch of the i20 N, Hyundai now offers enthusiast drivers a wider selection of accomplished and affordable performance machinery than its Japanese rival.