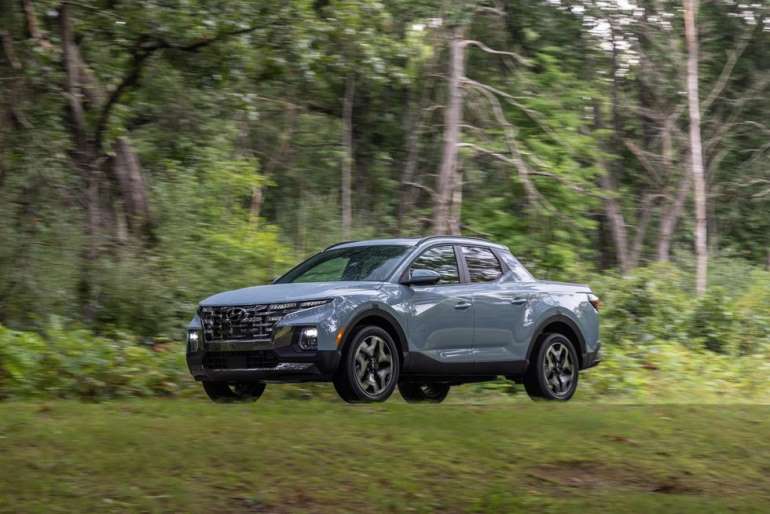 Breaking into the lucrative truck market isn't for the faint of heart. Subaru's Baja lasted four short years, Honda had to butch up the looks of its Ridgeline to secure a seat at the table, and even Toyota's T100 stumbled until it became the V-8-powered Tundra. And who can forget the Ford Explorer Sport Trac? It would seem that to succeed in this segment, your truck had better look and perform like, well, a truck.

In what may be an attempt to manage expectations, Hyundai isn't using the "t" word to describe its new entry, instead referring to it as a "Sport Adventure Vehicle." Hyundai even goes so far as to claim the Santa Cruz wasn't designed as a mid-size truck competitor, but one look at the package and it's hard to classify it as anything else.

Drive it and you're not so quick to use the "t" word. The Santa Cruz rides on an extended version of the Tucson crossover's platform, with struts up front and a multilink suspension with self-leveling dampers out back. Its 118.3-inch wheelbase (nearly 10 inches longer than the Tucson) contributes to a calm and composed ride, with none of the rear-end skittishness sometimes present in a full-size pickup with an empty bed. Maneuverability around town is carlike. At 195.7 inches long and 75.0 inches wide, the Santa Cruz easily slots into parking spots. Driven with haste along two-lane back roads, the Santa Cruz is agile, remaining relatively flat through the corners.
The top-range Limited example we tested had plenty of punch to go along with its moves. Borrowed from the larger Santa Fe, its turbocharged 2.5-liter inline-four kicks out a meaningful 281 horsepower. An eight-speed dual-clutch automatic channels the torque to all four wheels. Off the line, this powertrain will wait a beat before its turbo starts charging, but it quickly builds a head of steam, delivering a stout 311 pound-feet of torque from 1700 to 4000 rpm. The run to 60 mph takes a respectable 6.0 seconds flat, and the quarter-mile passes in 14.5 seconds at 98 mph. Aided by a light-for-a-truck 4132-pound curb weight, that's enough thrust to outaccelerate all the players in our most recent comparison test of mid-size pickups, all of which weighed in excess of 4500 pounds. Likewise, our example's 0.82 g of skidpad grip and 171-foot stop from 70 mph also would've been sufficient for top honors in that evaluation.
Lesser Santa Cruz models ditch the turbo and the dual-clutch for a 191-hp 2.5-liter and a conventional eight-speed automatic. The base 2.5-liter musters just 181 pound-feet of torque and is something we'd skip. We haven't tested that version yet, but in an all-wheel-drive Tucson, the nonturbo 2.5-liter results in a sluggish 8.8-second time to 60 mph. Front-wheel drive is standard here, with all-wheel drive a $1500 option. There's no hybrid variant, but since the Tucson features both hybrid and plug-in versions, we predict the closely related Santa Cruz will follow suit in the future. In terms of fuel economy, the standard 2.5-liter four holds a slight advantage: an EPA combined estimate of 23 mpg versus the turbo model's 22, although our test car did average 30 mpg on our 75-mph highway test, bettering its highway estimate by 3 mpg.

Despite its Tucson underpinnings, the Santa Cruz is capable of trucklike activities. Turbo all-wheel-drive models are rated to tow 5000 pounds, and even the base front-drive setup can tow 3500 pounds. Trailer sway control, a function of the stability-control system, helps mitigate untoward trailer motions and comes standard on all models. Off-road excursions are also possible, as 8.6 inches of ground clearance is enough to get you into the rough stuff. A decent 23.2-degree departure angle will ensure you'll get out of most moderately difficult situations without leaving the rear bumper on the trail. The journey itself might not be entirely smooth, as we found that the stickiness of the Santa Cruz's floor-mounted throttle pedal can make it difficult to maintain a smooth crawling speed.

Duality of purpose notwithstanding, the true make-or-break feature here lies out back. Where most truck beds are a blank canvas, this is more of an artist's toolkit. As the Santa Cruz is designed exclusively for the North American market, the development team worked to bake in the kind of usability and versatility that would appeal to the outdoor-adventure set marketers love to target. Key to this mission is a dent-resistant molded composite bed (as opposed to stamped steel), which allowed the team to utilize every square inch of the space—whether it's in, under, or atop the bed.

Packed with cubbies and hidden compartments, the Santa Cruz's plastic bed is more intricate than a puzzle box. Just as in the Honda Ridgeline, there's a lockable underfloor storage space located close enough to the tailgate that it's easy to retrieve items without straining yourself. Drain plugs make it a perfect place to keep drinks on ice. More storage can be found on the sides of the bed behind the wheel wells, along with an AC power outlet with enough current to run a small refrigerator. There are tie-downs throughout, as well as an adjustable cleat system. The space above the wheel wells is wide enough to accommodate four-foot-wide sheets of plywood.

Hyundai also went bonkers on the accessories. Whatever item your hobby requires, the Santa Cruz can likely secure, store, and transport it. With the tailgate down, it can accommodate a couple of dirt bikes or kayaks. A factory tonneau cover retracts to the front of the bed and is a lot easier to use than the folding jobs seen on some pickups. Precut tabs on the top of the bed rails can be punched out to add a canopy system. And when was the last time you saw a truck with roof-mounted crossbars?

Climb in and you'll discover a refined interior largely shared with the Tucson. A reasonably hushed 67 decibels of noise creep into the cabin at 70 mph, with full-throttle pulls registering only 72 decibels on our sound meter. The instrument panel and infotainment screen are neatly tucked into the dash, rather than being mounted on top. The result is a clean, low-profile dashtop, which allows for excellent forward visibility. The Santa Cruz accommodates tall passengers in both rows, with plenty of headroom and decent legroom in the rear. Like many pickups with small sliding rear windows, objects that pass through are limited to things the size of soccer balls and six-packs.

The center stack features all of Hyundai's latest tech. Most models feature an 8.0-inch touchscreen, with wireless Apple CarPlay and Android Auto standard. Exclusive to the Limited trim is a 10.3-inch screen with navigation. As with the Tucson, the system with the larger screen can't do wireless phone mirroring; you'll have to plug in your phone like it's 2018. Most controls surrounding the system are of the capacitive-touch variety; they look sleek but attract their fair share of fingerprints and aren't as user-friendly as the physical buttons found in other Hyundai models. In what's a first for the brand, a tiny little Santa Cruz emblem adorns the controls for air recirculation and hill-descent control. The Santa Cruz's interior and exterior is peppered with other Easter eggs.

Despite what Hyundai claims, those little illustrations indeed resemble the shape of a truck because the Santa Cruz's silhouette says truck. But the exterior lacks the upright and squared-off look that characterizes traditional pickups. The styling is a muscular and bulked-up take on Hyundai's latest design language, and the big, bold grille full of brightwork is handsome. But the Santa Cruz looks like a crossover-turned-pickup. It makes no attempt to hide its roots.

Arguing how truckish it is or isn't might be fun for internet arguments (Please comment below—Ed.), but the biggest obstacle for the Santa Cruz could be its price. Base SE versions begin at $25,215 and include a good amount of standard equipment, but opting for the turbo requires an additional $10K. Top-spec Limited models begin at a steep $40,945. This pricing becomes an issue when you consider a world where the similarly sized Ford Maverick exists. A Maverick starts at just a hair over $20,000 and features a standard hybrid powertrain that's good for a 37-mpg combined EPA fuel-economy rating; more powerful turbocharged versions top out at a still-frugal 26 mpg combined. The Maverick also features more conventional truck styling, which might make it more attractive to more conventional truck buyers. But Hyundai is taking another tack—it remains to be seen if its gamble will pay off. So perhaps the question becomes: Do you want a truck, or do you want a Santa Cruz?
(https://www.caranddriver.com/reviews/a37274532/2022-hyundai-santa-cruz-drive/)
Tagged under
More in this category: « Hyundai i20 N First Drive: Hyundai’s Best Driver’s Car 2022 Hyundai Kona Review: A Cute-Ute Formula That Makes Sense »