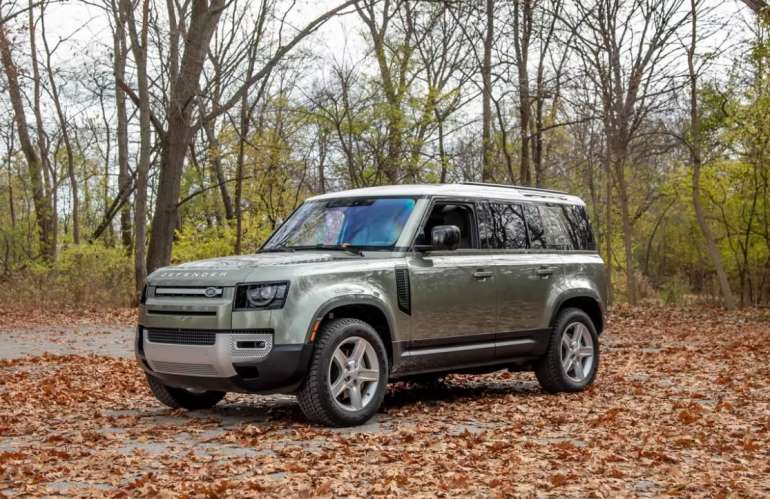 The verdict: The Defender delivers modern Land Rover SUV qualities, like impressive power and extensive off-road technology, in a distinctive shape that plays off the past.

Versus the competition: For a mid-size luxury SUV, the Defender’s claimed off-road capabilities — including a 35.4-inch wading depth — are considerable. It’s also surprisingly nimble and refined on the street, though its design emphasizes ruggedness over traditional luxury cues.

Last sold in the U.S. for the 1997 model year, “Defender” is a legendary Land Rover nameplate that has embodied capability much the same way as Jeep’s “Wrangler.” More expensive than Land Rover’s entry-luxury compact SUVs but not as pricey as the brand’s family of Range Rover models, the Defender sits alongside the Discovery in Land Rover’s lineup.

The Defender is offered in two-door (90) and four-door (110) form. Our primary test vehicle was a 2020 four-door SE trim level with the optional mild-hybrid drivetrain, which features an inline-six-cylinder engine that’s both turbocharged and supercharged. We also spent some time in a 2021 two-door First Edition. The as-tested price of our SE version was $72,180, while the First Edition’s as-tested price was $66,475 (prices include a $1,350 destination charge).

We weren’t able to test the Defender off-road, but judging by the number of Land Rovers we see cruising around Chicago and its suburbs, the urban jungle is as natural a Land Rover habitat as an actual jungle. We’re looking forward to testing the Defender off-road in the future, but for now this review covers what it’s like as a daily driver.

The four-door Defender is a big, heavy vehicle that’s as tall and wide as some full-size SUVs. The six-cylinder’s 395-horsepower rating is nothing to sneeze at, but it feels like there’s even more power under the Defender’s hood; the engine delivers effortless acceleration that belies this SUV’s considerable bulk. It incorporates an electrically driven supercharger that increases boost pressure at low engine rpm, resulting in 406 pounds-feet of torque from 2,000 rpm. While it doesn’t have the kind of forceful high-speed passing power the Range Rover’s available supercharged V-8 produces, it’s still swift.

Both the mild-hybrid inline-six and the standard turbo four-cylinder pair with an eight-speed automatic transmission and permanent four-wheel drive. The automatic makes the most of the inline-six’s considerable power, and it never felt like it was in the wrong gear. The transmission is also responsive; press the gas pedal halfway down for more power when cruising on the highway and it immediately kicks down. Full-throttle kickdowns take a bit longer, however.

The mild-hybrid drivetrain makes about 100 hp more than the base four-cylinder and gets slightly better estimated gas mileage: It’s EPA-rated 17/22/19 mpg city/highway/combined versus the base engine’s 17/20/18 mpg rating. Both engines have better estimated fuel economy than the Lexus GX 460, another off-road-capable luxury SUV, which is powered by a 301-hp V-8 and rated 15/19/16 mpg.

Despite its size, the Defender doesn’t drive like a big SUV; it’s easy to maneuver and place where you want. It steers with a light touch, and steering response is direct and precise. The tall driving position affords commanding forward views, and the SUV feels poised whether you’re on suburban streets or the highway.

The original Defender and the models that preceded it were rugged, military-derived, no-frills vehicles. The new Defender’s interior has its share of luxury cues, but it’s not as plush as other Land Rovers.

That doesn’t mean its unique design cues aren’t cool. They are, and some of them are even functional. Exposed Torx-style screws on the doors and center console lend a bit of an industrial feel, and the recessed dashboard face creates a nearly vehicle-wide shelf for odds and ends. It’s just one of many storage areas in the Defender, which also has large door pockets and an open storage area where the center console meets the dash.

The Defender’s front bucket seats are comfortable, and the padded center console lid serves as a comfy armrest. The seats in our SE trim were finished in leather center sections trimmed with woven fabric, but full-leather seating is available.

Taller adults can ride comfortably in the four-door model’s second row, which has lots of headroom — even with the optional panoramic moonroof. The seat cushion and backrest aren’t adjustable in two-row models, but legroom is adequate. A two-seat third row is optional.

Compared with the dual-screen control systems in some other Land Rovers, the Defender’s single 10-inch dashboard touchscreen and the physical air conditioning controls below it are refreshingly simple to use. The display runs Land Rover’s new Pivi Pro multimedia system, which has easy-to-navigate on-screen menus, crisp graphics and an intuitive navigation system.

The system also includes wired Apple CarPlay and Android Auto smartphone connectivity. CarPlay started immediately when I connected my phone to the USB port, and it makes the most of the widescreen display by using all the screen’s width.

Our Defender 110 had no shortage of ports for devices, with USB-A and USB-C ports in front and four USB ports in the second row. Two ports can be had in the backs of the front seats to charge tablets mounted on the optional Click and Go holders.

Some of the Defender’s design elements create usability problems. While forward visibility is good and the front roof pillars are relatively thin, wide B-pillars restrict over-shoulder views, and rear visibility is partially obstructed by the full-size spare tire mounted on the swing gate. A rearview camera mirror that can display a feed of what’s behind the SUV — eliminating the blind spot created by the spare tire — is available.

That swing gate is a nod to the previous Defender, and even though it’s a good place to store a large, heavy wheel and tire that would otherwise rob interior space (or compromise off-roading if affixed to the undercarriage), there’s a reason you rarely see them anymore. Swing gates can be difficult to fully open when parallel-parked, and ones like the Defender’s, with passenger-side hinges, block curbside access to the cargo area when open.

The two-row Defender 110’s 40/20/40-split backseat also uses an older folding design that’s surprising to see in an all-new vehicle: Rather than simply folding the backrest to extend the cargo floor, you must first flip the seat cushion forward to get a flat floor. It also takes a lot of effort to restore the heavy seatbacks to their upright position.

The Defender 90’s ride quality is impressive, and only the roughest roads unsettle it. The ride is comfortable, controlled and refined with the air suspension, and the SUV feels stable at highway speeds. Even with its shorter wheelbase, it rides about as well as the four-door 110 version. There’s noticeable squat under hard acceleration and nosedive when braking, but it’s more tolerable than what you can experience in a Toyota 4Runner, for instance.

The mild-hybrid six-cylinder drivetrain feels just as strong in the slightly lighter Defender 90 as it does in the 110. Mash the gas pedal on the highway and the automatic transmission readily kicks down, the hood lifts toward the sky and the SUV barrels forward. The supercharged V-8 engine that joins the Defender’s powertrain lineup for the 2022 model year is likely a blast to drive, but the six-cylinder drivetrain should satisfy most buyers for less money. The mild-hybrid drivetrain also gets better gas mileage: 19 mpg combined versus 16 mpg for the V-8, according to EPA estimates.

The interior appointments and color scheme of the Defender 90 we tested were largely the same as the 110’s. The big difference in front was the presence of an optional jump seat in place of the center console and armrest. With the jump seat folded, you do get a center armrest but still go without the console’s storage areas. The jump seat isn’t very comfortable for taller adults, either; it offers a knees-up seating position, and sitting right in front of the center dashboard controls could make it harder for the driver to reach the touchscreen, climate controls and gear selector.

The Defender 90’s backseat accommodations were a pleasant surprise. The seating position is comfortable for taller people, and there’s plenty of legroom and headroom. The large side windows offer good views out, too. However, getting to the rear bench seat isn’t easy; the front seats motor forward slowly, and climbing back there isn’t a graceful experience. There’s minimal cargo space behind the backseat, and the seat doesn’t fold flat with the cargo floor.

Our Defender 90 had an available power-retractable fabric roof, a relatively uncommon feature. The fabric retracts over the rear seat, giving you a bit of an open-air driving experience, but it doesn’t feel like you’re in a convertible with its top down; there’s still a lot of SUV around you. The closed fabric roof also lets in more noise than a panoramic moonroof, which the Defender also offers.

The Defender hadn’t been crash-tested by the Insurance Institute for Highway Safety or the National Highway Traffic Safety Administration as of publication.

Value in Its Class

The base four-door Defender comes with its share of premium features as standard equipment, including an adaptive air suspension, a 360-degree camera system and wireless device charging. There are some downmarket features, too, like painted steel wheels and fabric seating surfaces. You could make a case that those more basic features make sense for off-roading, but it doesn’t change the fact that the Defender starts at more than $50,000. There aren’t any other mid-size luxury SUVs like it, though, and that uniqueness is part of the Defender’s appeal — whether you need its off-road capability or not.