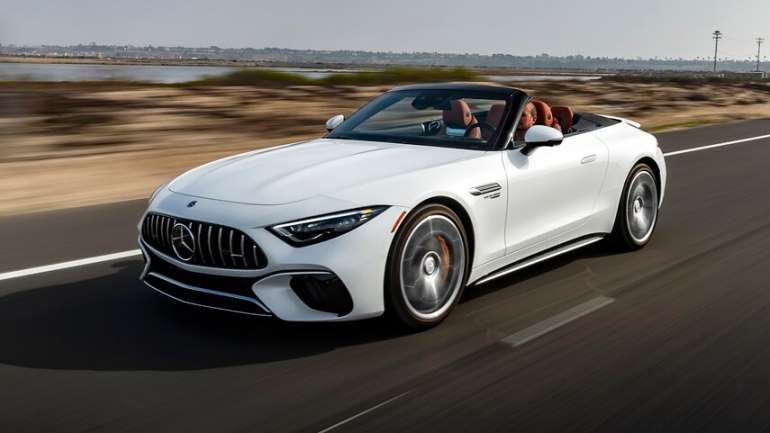 The AMG gang in Affalterbach desperately wants you to know a few things about the 2022 Mercedes-AMG SL-Class. One, they designed it. From scratch and with little help from the Benz mothership. Two, it barely shares a screw or rivet with the AMG GT Roadster they also designed. Three, despite the new SL having grown a pair of vestigial back seats and adding a few inches in length, it promises to be the sportiest SL roadster since the racing-derived 300SL from 1957. And four, thanks to miracles of modern science, this new R232 SL also promises to deliver comfort on par with—if not exceeding—that of its Mercedes-developed R231 predecessor.

Three months of engineering roundtable Zoom calls and even a low-speed ridealong event have sufficiently satisfied us on the first two points; it's the last two that we've been itching to verify. At long last we had the opportunity to flog both the SL55 and SL63 variants on a variety of highways and twisting roads. So, has AMG managed to channel the speed-record-setting, Mille Miglia-winning verve of the original W196 while making the car even more cosseting and comfy than the outgoing roadsters?

The 2022 Mercedes-AMG SL63 will undoubtedly go down in our record books as the quickest SL we've tested. Mercedes claims this 577-hp, 590-lb-ft beast will dash from 0 to 60 mph in just 3.5 seconds, thanks in large part to newly standard all-wheel-drive traction that guarantees none of those ponies or pound-feet gets squandered generating tire smoke or brake heat from traction-control intervention. Converting those estimates to account for MotorTrend launch-control test conditions and a 1-foot rollout will probably boil that number down to something much closer to 3.0 seconds flat. (The last two SL models we tested each beat Mercedes' conservative estimates by exactly half a second.) The SL55, running the exact same engine but with smaller turbos and slightly less aggressive tuning produces "just" 469 horsepower and 517 lb-ft. The AMG team reckons it'll give up three-tenths to the SL63.

For some perspective, that performance should rank the SL models somewhere about even with the Porsche 911 Carrera 4S and GTS cabriolets, which is to say, ahead of the BMW M850i xDrive cab (3.9 seconds to 60 mph) and way out in front Lexus LC500 (4.7 seconds) in the bucks-up 2+2 cabrio set.

Trust us, if you never drive an SL63, that SL55 will seem like it has more than enough power. However, we might counsel those prepared to settle for the SL55 to consider opting for its AMG Dynamic Plus package, which brings with it a Race mode. We don't typically prefer Race modes because they usually disable all the stability controls, increasing amateurs' risk considerably. This one does not.

What it mostly does, in addition to heightening all the car's responses, is switch to a perfectly linear throttle response map. There's more gain earlier in the pedal travel in the Sport and Sport+ modes, which may make the car seem more eager and powerful, but at some cost to the predictability serious drivers prefer. The computer programming in Sport+ and Race modes devotes a bit of extra fuel to generating delightful pops and snorts on overrun. That feature is fun, but this mode also tends to deliver some harsher downshifts when slowing, which can feel like grabbing brakes (this never happened in Comfort mode).

We only got the SL63 up to triple-digit speeds briefly, but with the optional AMG Aerodynamics package, an air dam in front of the engine lowers 1.6 inches at speeds above 50 mph to help induce a venturi effect that helps suck the car down to the ground and reduce front-axle lift.

These are heavy cars, pushing two-and-a-quarter tons. But AMG Active Ride Control, which connects opposite corners of the car hydraulically to limit body roll (as on various McLaren cars and now Rivian trucks), truly makes them feel as agile as cars weighing a half-ton less. This is another feature that's standard on the SL63, and available to help make your SL55 cost almost as much as a 63.

Clicking the steering-wheel-mounted drive mode selector clockwise relaxes the stability nannies somewhat, making the cars progressively more neutral in their handling demeanor, but there's no "drift mode," no option to bar torque from reaching the front axle. (That's right—unlike the AMG GT family, the SLs are all-wheel drive.) And hence, even an aggressive drive up Mount Palomar on a cool morning with slightly dewy road surface, we never once sensed Race mode allowing the tail to run wide. More than a little credit here is due the Michelin Pilot Sport 4S tires—265/40 front, 295/35 rear on the standard 20-inch rims, or 275/35 front and 305/30 on the optional 21s we mostly ran.

The carbon-composite brakes deserve honorable mention for being equally adept at shedding heroic speeds upon approach to a tightening-radius corner—corner after corner—as they are at executing a limousine stop in town. Both models share this standard six-piston front, single-piston rear brake system.

Steering feel changes as you switch modes, and we generally found the comfort mode to be a bit too light. The other modes don't heighten the driver's feel for the road, per se, but the firmer helm feels better. We were blissfully unaware of the four-wheel steering (standard on both models) doing its thing, except when executing exceptionally tight U-turns.

The California roads between Newport Beach and Palm Springs are relatively smooth, but we aimed for the bumpiest patches we could find and were impressed by the suspension compliance afforded in Comfort mode. The Sport and Race modes firm things up noticeably enough that we took the time to program the Individual mode with everything set to its raciest option and the suspension set to Comfort. This was our Goldilocks "just right" setting, but we also appreciated that individual characteristics (steering, ride, exhaust noise, etc.) can be easily adjusted on the fly using the round selector and twin toggle switches at the lower left side of the wheel, just opposite the main mode-selector switch. The super-rigid multi-material structure never seemed to twist or jiggle in response to bumps.

Mostly wonderful. The cabin seems as quiet with the soft top up as the previous model did with its folding hard top raised. The Z-fold fabric roof lowers in 15 seconds at the touch of a button, and a switch allows all four windows to be lowered simultaneously. Happily, the sun visors swivel out, unlike on some convertibles. Raise the windows and pull up the mesh-screen wind blocker that covers the rear "seat" to keep the cabin remarkably calm and quiet even at highway speeds. In cooler weather, switch on the Airscarf neck-warmer to extend the top-down season (the cockpit isn't long enough to need the E-Class convertible's Air Cap windshield header air-management screen).

The center info screen adjusts between 12 and 32 degrees to prevent sun from reflecting directly into the driver's eyes, though the buttons for adjusting this (and for raising and lowering the top) can be hard to see when that glare prompts you to fix the screen. We're also not completely sold on a lot of the capacitive switchgear in use here. The mirror switch, for example, didn't seem to respond as expected. We have yet to experience capacitive switches we love.

As with all new Mercedes products, the all-digital instrument cluster can be set to display any of several different themes and tons of information, the most pertinent of which is redundantly shown on the head-up display (standard on 63, optional on 55). Track Pace screens will help folks monitor and improve their performance on their car country club track, and the additional stowage space behind the front seats and in the trunk should make the new SL much more useful as a daily driver.

We reckon the new car is comfortable enough to retain the SL faithful and sporty enough to pull some customers out of 911s, the BMW 8 Series, and Lexus LCs. Of those, the BMW's nearly 5 inches of added wheelbase gives it a slightly more usable rear seat (the SL's is only rated for passengers shorter than 5 feet tall). A lighter Porsche will always feel nimbler, and the Lexus design may turn more heads, but this Mercedes-AMG enjoys nearly seven decades of heritage, and this R232 pays legitimate homage to its very best SL progenitors.

When And How Much?

The 2022 Mercedes-AMG SL-Class will go on sale in the second quarter of 2022. Mercedes isn't talking pricing just yet, but it seems a safe bet to assume that since the new 2+2-seat SL is effectively replacing both the four-seat S-Class cabriolet and two-seat R231 Mercedes-Benz SL-Class, pricing should represent an average of these models. Let's figure $132K for the SL55 and $175K for the SL63. That prices the new SL right in the thick of the 2+2-passenger convertible crowd.