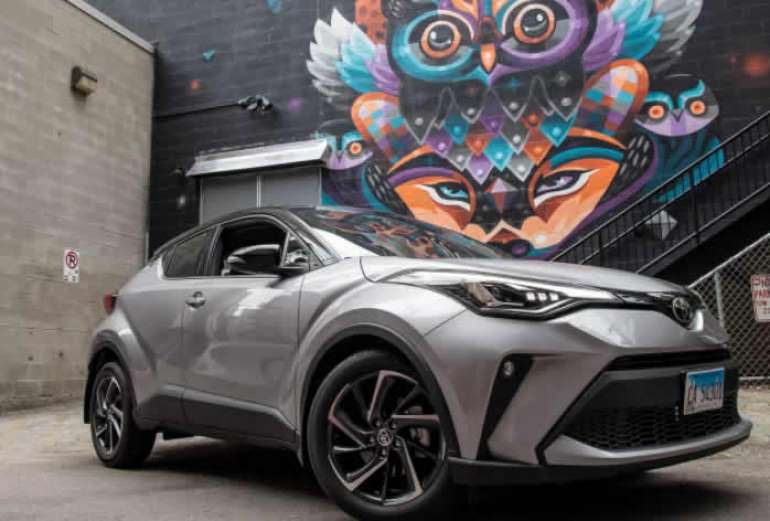 The verdict: The 2020 Toyota C-HR uses its funky styling (mostly) to its advantage, with a generous helping of standard safety features.

Versus the competition: The class of faux SUVs — lifted hatchbacks with SUV-like styling and cargo space that don’t even offer all-wheel drive — is growing, but the C-HR still stands out among the crowd thanks to its driving experience and safety features, not just its styling.

Though we usually let the images represent what a vehicle looks like, it’s hard to talk about the C-HR without at least acknowledging its styling. I called it ugly before it even went on sale, but I’ve actually mellowed in the years since. The sharp angles may not be for everyone, but at least it isn’t a generic blob or a traditional-looking SUV. The C-HR’s funky looks may even make it more appealing — at least to buyers looking to stand out in a sea of blah vehicles.

The 2020 C-HR has revised front styling, including new headlamps, but you’d be hard-pressed to discern what’s different without putting the two side by side. There are also new wheel designs to choose from.

Besides that, this is still the small, lifted hatchback that Toyota — and Cars.com, perhaps grudgingly — calls an SUV, despite its being exclusively front-wheel drive. It competes with similar FWD-only tall cars like the Hyundai Venue, Kia Soul and Nissan Kicks (see them compared). 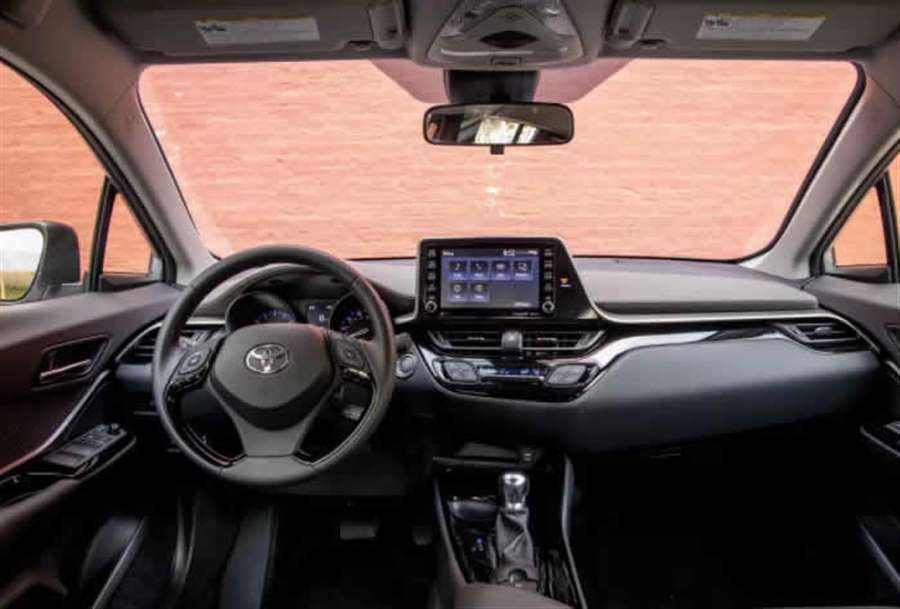 The C-HR’s interior, particularly in the Limited trim I tested, has some hits and misses — not unexpected in a car costing less than $30,000. There’s decent leather upholstery on the Limited, and most of the hard surfaces don’t feel overly cheap, if not very upscale. Like on the exterior, there are fun aesthetic touches inside, such as textured plastic inserts in the door panels and oval designs scooped out of the headliner. Neither adds function or feels high-end, but they do add a touch of whimsy that I appreciate.

Another hit is the 8-inch touchscreen, which is flanked by physical buttons that control various functions, as well as volume and tuning knobs. The system operates quickly and the graphics are clear, if a bit dated. Apple CarPlay and Android Auto — the latter new for 2020 — are standard. Below the screen and central air vents are the climate controls, which are simple and easy to use.

Not so easy to use were the menus in the gauge cluster, which could display a variety of information (including the G-forces the C-HR was experiencing while driving) but not a digital tire pressure readout. Toyota buried the C-HR’s drive modes in there, too, making it a pain to switch modes. I accidentally stumbled across the modes the first time I drove the C-HR, but the next time I got in, I had to pull over and read the owner’s manual to figure out how to change them. Just give me a physical button or switch, please. 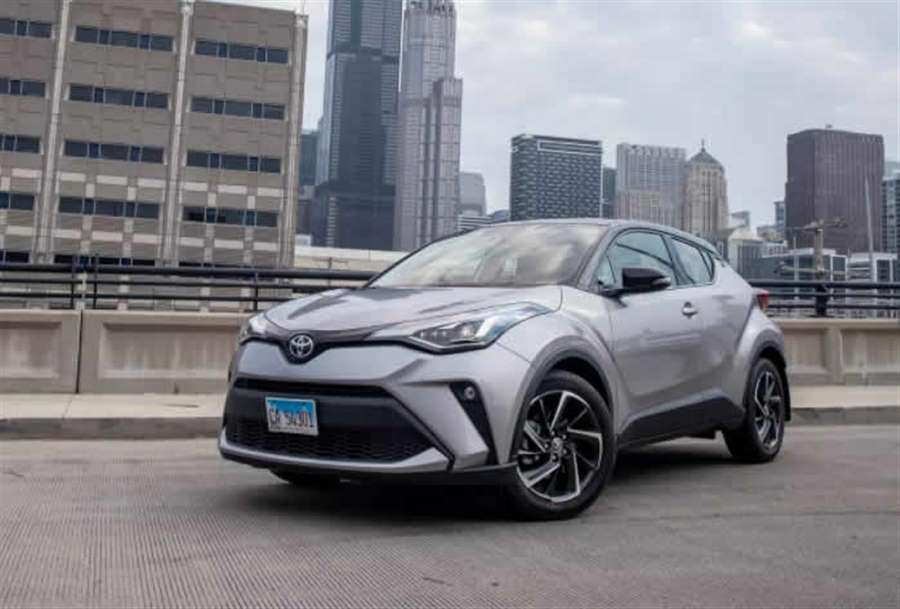 Another miss is in the rear. Surprisingly, I had ample legroom and a decent amount of headroom in spite of the C-HR’s compact size and sloping roofline, but its high beltline and tiny rear window contributed to a very enclosed feeling overall. It reminded me of sitting in the window seat on a plane when the window doesn’t line up with the row of seats and you have an obscured view the whole flight. ([Seinfeld voice] What’s the deal with that?) It’s not ideal, and it’s a direct consequence of the C-HR’s styling.

As for the cargo area, with the backseat upright, Toyota estimates the space at 19.1 cubic feet. In practice, it was enough for a pretty significant grocery run and would probably suffice for two adults’ luggage for a weeklong trip (though some stacking may be involved). With the backseat folded, the C-HR takes advantage of its extra length better than the rest of the faux SUV class — it’s more than a foot longer than the Venue, half a foot longer than the Soul and a few inches longer than the Kicks — to offset its low roof and increase cargo volume to 37 cubic feet (again, according to Toyota; we’ve found manufacturers to be inconsistent with such measurements).

The “C” in C-HR stands for “coupe,” so you’d be right to expect a sporty — or at least sportier — driving experience. (“HR” is for “High Rider,” because it sits a little higher.) And there is some of that sportiness there, with direct, communicative steering and nimble handling that make the C-HR feel like it can be pushed harder than the Venue or Kicks.

The 144-horsepower, 2.0-liter four-cylinder engine also makes more horsepower than the Venue or Kicks, but it needs to; the CH-R outweighs those models by a substantial 743 and 609 pounds, respectively (comparing base trim levels). The Toyota has a continuously variable automatic transmission that leads to a great deal of droning noise at higher speeds or under aggressive acceleration. It also does a poor job of mimicking a traditional automatic transmission, leading to a noticeable rubber-band feeling when you hit the gas. That makes highway driving a bit of a chore, with a noticeable wait for passing power and added engine noise.

The 2020 C-HR’s gas mileage is at the bottom of this subclass, rated by the EPA at 27/31/29 mpg city/highway/combined with its standard four-cylinder engine. That’s a lower combined rating than the Kicks, Venue or Soul with its standard four-cylinder engine. If you get the 201-hp, 1.6-liter turbo four in the Soul, the combined ratings are the same, but the Soul Turbo is rated at 32 mpg on the highway.

The sportiness also makes for a firm-feeling ride — not uncommon for a small car, but the 18-inch wheels on my test car likely didn’t help. The LE gets 17-inch wheels, while the mid-range XLE also rides on 18s. Despite the harsher ride, the C-HR remained composed over broken pavement and expansion joints.

Visibility is another casualty of the C-HR’s styling, with the raked windshield putting the A-pillars in the way of traffic and pedestrians approaching from the sides, and the small rear windows and door windows make it more difficult to see what’s around you.

Fortunately, Toyota includes a full complement of standard safety tech on all C-HRs as part of its Safety Sense suite, helping mitigate its limited visibility. Those features include forward collision warning with automatic emergency braking and pedestrian detection, lane departure warning with lane keeping assist, adaptive cruise control, and automatic high beams. Adaptive cruise control is a nice touch for the class, particularly as a standard feature. Only the Soul Turbo offers it as an option; it’s not available on the Kicks or Venue. 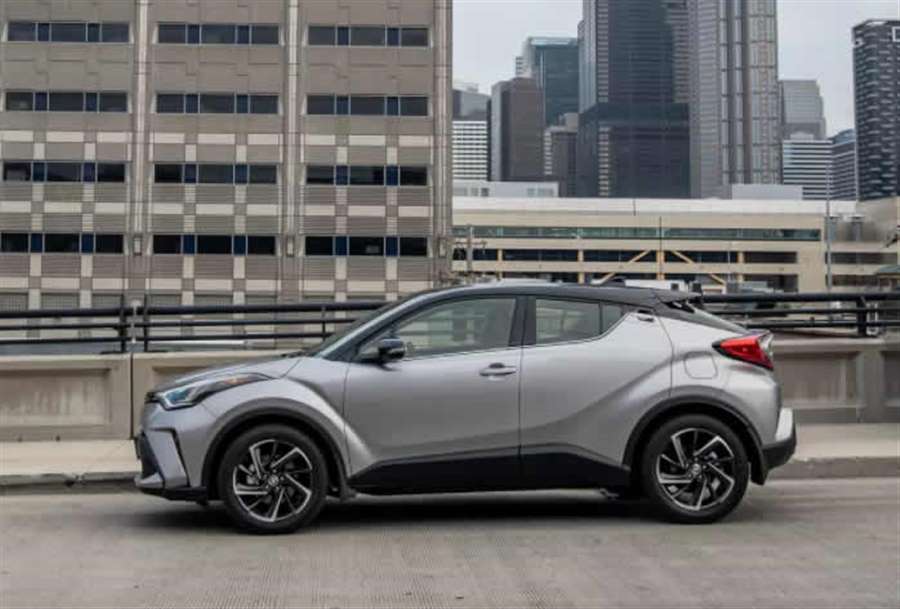 A welcome change since the C-HR’s debut? A backup camera image that appears on the infotainment screen instead of in the rearview mirror. It debuted in the 2019 model.

The C-HR aced the Insurance Institute for Highway Safety’s crashworthiness tests and its vehicle-to-vehicle front crash-avoidance tests. The LED headlights that come standard on the Limited also earned the highest possible rating of good, but the set that comes on the LE and XLE rated poor, IIHS’ lowest rating. (For perspective, mixed ratings — and poor ones — are common for headlights in the institute’s Small SUV class.) The National Highway Traffic Safety Administration gave the C-HR a five-star overall rating, with five stars for front and side impacts and four for rollover resistance.

Within its class of FWD-only SUVs, the C-HR is one of the most expensive choices, particularly in the Limited trim — our test vehicle approached $30,000. Top trims of the Venue and Kicks, meanwhile, have sub-$25,000 prices, and the Soul Turbo offers more performance for a similar price. While the C-HR is more expensive, though, it does have more standard safety features and one of the more engaging driving experiences.

Expand the choices into small SUVs that do offer all-wheel drive and things get even murkier: The 2021 Kia Seltos, which just won our affordable small SUV comparison, costs only a few hundred dollars more than the C-HR Limited and brings AWD and a more traditional SUV silhouette. More expensive choices include the Mazda CX-30, which is much more enjoyable to drive and has a premium interior but a much less user-friendly infotainment system. The Subaru Crosstrek has a similar lineup of standard safety features and standard AWD, but it can cost more, particularly if you want the new optional 2.5-liter four-cylinder.

What may make the C-HR most appealing in an increasingly crowded field of both front- and all-wheel-drive small SUVs is its combination of unique exterior styling, safety features and sub-$30,000 pricing, particularly if shoppers are considering choices with all-wheel drive.