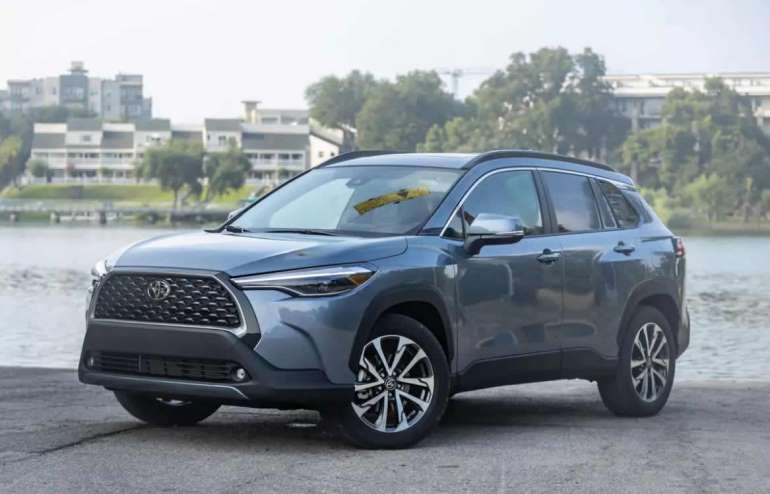 Versus the competition: There are more exciting competitors, better performing ones, some with nicer interiors, those with better ergonomics and ones with better multimedia systems — but the Corolla Cross’ combination of basic safety, value pricing and reputation for reliability will immediately make it a strong contender.

Until now, if you wanted a small SUV and you went to your local Toyota showroom, your choices were twofold: the RAV4 compact, which has grown to nearly mid-size proportions over the years, or the cramped and quirky C-HR, which features neither significant room inside nor optional all-wheel drive. Nothing hit that “sweet spot” between the two, nothing sized “just right” for people on a budget who still wanted the high seating, additional cargo space and all-weather capability of an SUV.

Well, Toyota has rectified that gap in its lineup with this, the new 2022 Toyota Corolla Cross. It uses the Corolla name because it uses a lot of Corolla parts: It sits on the same platform as the compact sedan, uses the same engine and transmission, and shares a lot of common interior bits. And while it’s easy to take shots at the Corolla sedan (its reputation is not one of excitement), that car is known instead as a safe, steady, reliable choice. Owning one won’t light your heart on fire, but it may set your mind at ease knowing that your car is very unlikely to ever let you down, drain your wallet or leave you stranded. Toyota is hoping that this same sentiment will transfer over to this new subcompact SUV — and there’s every reason to think that they’re right.

From the outside, it’s not difficult to imagine the new Corolla Cross fitting into the Toyota lineup. The family resemblance is strong, with a front and rear end that look like a three-quarter-scale Highlander right down to the horseshoe grille and separated horizontal taillights. The only distinctive feature might be the more sculpted fenders along the sides, but Toyota’s efforts to make the Corolla Cross more mainstream-appealing than the quirky C-HR are clearly the styling priority. A high point: LED headlights are standard across the range of trim levels, something that’s starting to become more common. Overall, however, the styling previews the experience you’re going to have with a Corolla Cross: It’s safe and anonymous, none too exciting but pleasant enough.

The Comfort of Familiar Surroundings

Stepping into the Corolla Cross’ cabin puts you in an immediately familiar environment — the Corolla compact is the bestselling vehicle in the world, with Toyota announcing recently that 50 million of them have been sold over the decades. So the look of the dash, gauges, controls, electronics — all of the bits and pieces of the Corolla Cross — look similar to the successful design of the Corolla. Again, Toyota’s not breaking any new ground with this interior, but it’s not trying to, either — it’s trying to build on the successful formula that’s made the Corolla a global hit. It’s easy to look at, relatively simple to use and uncomplicated in what it provides.

The seats are comfortable front and rear, and there’s sufficient legroom in any position for four people, though five might be tight with three across in the backseat. There’s plenty of headroom for all occupants even with an optional moonroof, and outward visibility is top-notch, with no significant blind spots. It feels like sitting in a new Corolla sedan, only taller, with a more upright seating position and a better view over surrounding traffic. That boost in interior volume is notable, creating something more than simply a Corolla wagon — the cargo space is significantly more usable than a C-HR’s, and every Corolla Cross comes with a standard 60/40-split, folding backseat to boost capacity even more when necessary. Given the popularity of SUVs versus their mainstream sedan counterparts these days, it’s not hard to imagine the Corolla Cross becoming a more popular variant than the sedan or hatchback with the boost to user-friendly passenger and cargo flexibility.

The interior is not without issues, however. The Corolla Cross is built to a price point, and that shows up in several areas through the use of hard plastics on the dash, doors and consoles. The base Corolla Cross trim doesn’t even have a push-button start; it still uses a standard key and twist ignition, which is exceedingly rare these days. And the same ergonomic foibles that plague the Corolla sedan (and several other Toyota models) are present here — most notably the Tic-Tac-sized buttons for the multimedia system and climate controls, the latter also featuring hard-to-read dark-gray graphics on a black plastic background.

The standard gauges are analog dials with a small digital display, or you can spec a larger digital display in the XLE trim that looks snazzy if a bit busy. Apple CarPlay and Android Auto are standard, but you’ll have to plug your phone in — despite the top XLE getting Qi wireless charging, wireless Apple CarPlay and Android Auto are not available on any trim.

Definitely Not Built to Thrill

Toyota’s marketing strategy for the Corolla Cross portrays it as “just right,” with just the right amount of space, comfort, tech and efficiency. It’s hard to argue that point; it does have plenty of all the above. What it doesn’t offer the right amount of is grunt: Using the powertrain from the Corolla sedan, the Corolla Cross comes saddled with a 2.0-liter four-cylinder non-turbocharged engine making a tepid 169 horsepower and 150 pounds-feet of torque. It’s mated to a continuously variable automatic transmission that features an actual 1st gear before the pulleys take over, but it doesn’t help much. The transmission does an admirable job of keeping the engine in its power band, it’s just that there isn’t much power there to be had.

Simply put, acceleration is dog slow. Foot to the floor at a stoplight with just one person in the car elicits more noise than movement, and the Corolla Cross’ performance on the highway on-ramps and steeper hills around Austin, Texas, proved that it truly could use either a turbocharger to wring some more useful low-end torque out of the engine or a larger engine entirely. The Corolla Cross comes with a 1,500-pound tow rating, but I can’t imagine towing anything with this — even the idea of putting five people and luggage in the thing would make me question the safety of its underpowered engine.

Thankfully, the rest of the Corolla Cross’ dynamic behavior makes up somewhat for that lack of guts. Handling is neutral, the ride is well damped for a vehicle with such a short wheelbase, and body motions are controlled and taut. The brakes are strong, firm and confidence-inspiring, and while there is a bit of road noise depending on pavement conditions, the overall experience is one of a calm and quiet cruiser. How well the Corolla Cross works with a full load of occupants and gear onboard, however, remains to be seen.

So the latest crossover from Toyota is nicely sized, handles well, is comfortable and features a good deal of standard safety equipment. It might not be able to get out of its own way if you give it some gas, and we’ve yet to see how a full load of people affects its drivability. It can be accused of being underpowered, but it won’t be accused of being overpriced. The new 2022 Corolla Cross FWD starts at $23,410 (all prices include destination) for an entry-level L trim, climbs to $25,760 for an LE and $27,540 for a top XLE trim. Adding AWD will tack on another $1,300 regardless of trim level. A fully loaded XLE AWD won’t top $30,000, making it quite a nice package given its considerable equipment.

It stacks up well against a number of competitors, too, being larger than a Honda HR-V, Ford EcoSport and Hyundai Kona. A Chevrolet Trailblazer would be an excellent choice to stack up against the Corolla Cross, featuring a choice of turbocharged engines, more engaging handling and a very similar pricing structure. There’s no shortage of small SUVs in the $20,000 range for the Toyota Corolla Cross to go up against, but it would seem that Toyota has done its homework in crafting something that’s likely to steal some sales from all of them.