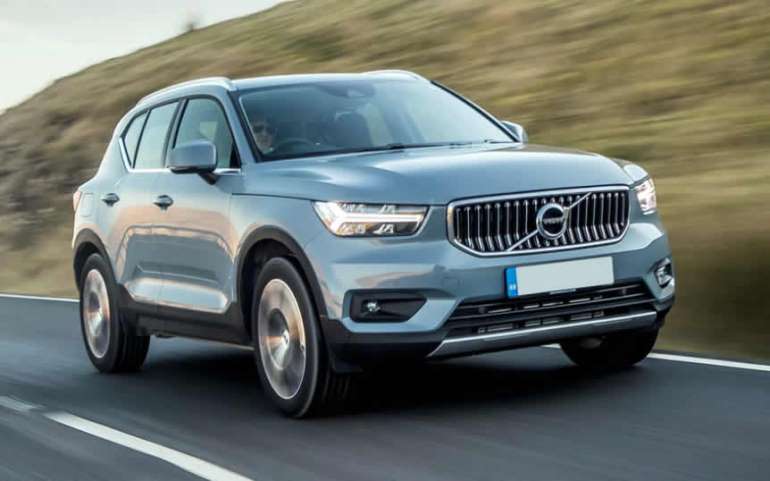 The Volvo XC40 is quite a head-turner. Its tough, chunky SUV styling blends typically Scandinavian minimalism with eye-catching cues, such as an optional two-tone paint scheme where the roof contrasts with the rest of the body.

It also blends typical Volvo virtues like comfort and space with the high driving position and in-town manoeuvrability of a small SUV. Unlike small SUVs from other manufacturers, which have a tendency to be a little like scaled-down copies of larger models (the BMW X1 and X3 spring to mind here), the XC40 its own distinctive style.

In fact, it’s more youthful-looking than its more mature big brother, the XC60 – think of it as funky tee to the XC60’s tailored shirt.

The XC40’s interior still delivers on the minimalist cool you’ve come to expect from modern Volvos, but in this case, there’s a more contemporary tone. Examples of this include the door trims, armrest and handles, which are made out of a single piece of plastic and have colour-coded felt-lined inlays. This design not only adds a dash of vibrancy to the cabin but also frees up space for larger capacity door bins. 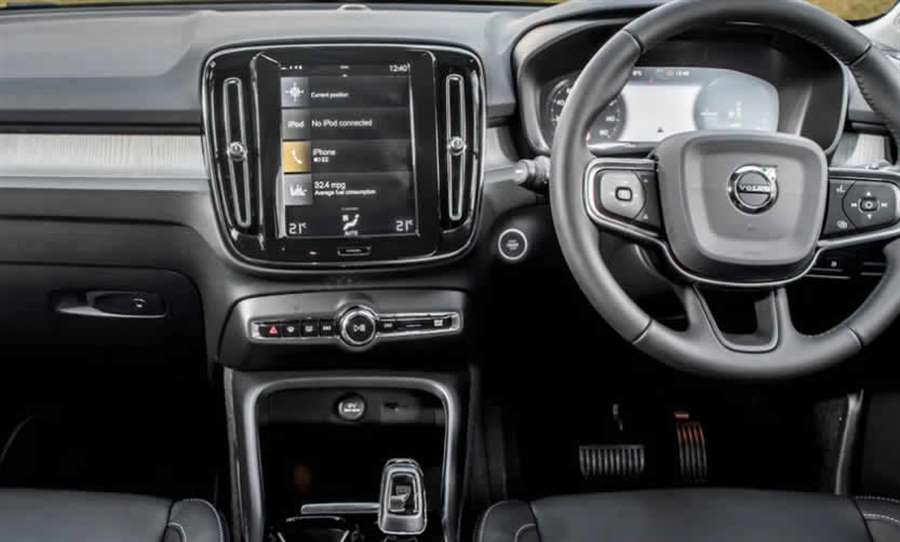 Cleverly thought-out storage solutions are a bit of a theme in the XC40 – the central armrest features a removable section that can work as a small waste paper bin, while the large, well-shaped boot offers a pop-up divider to help hold shopping bags in place. Both front-seat and rear-seat occupants will have plenty of space, too, and as a driver, you’ll find it easy to find an ideal driving position whether you’re small or tall.

There are some imperfections, though. Poke around a bit and you’ll notice some trim pieces feel of poorer quality than you might find in an Audi Q3. And, while the portrait-style infotainment system may look smart, being a touchscreen, it isn’t as easy to use when you’re driving as the rotary controller you get in a BMW X1.

Speaking of which the BMW is the slightly more fun car to drive. Yet that doesn’t mean the Volvo XC40 leans like a listing ship in the bends – it handles as well as you need an SUV to handle. And it gets the basics spot on. It’s comfy over bumps, effortless in town, and relaxing on the motorway.

Okay, so the engines and gearboxes in the XC40 aren’t quite as good as those in the comparative German models but this shouldn’t be a dealbreaker. The entry-level T3 petrol is punchy enough for town use and, if you do lots of miles, the economical D3 diesel is more than up to the job. You don’t really need to pay extra for the more powerful engines, although company car drivers should keep in mind the Recharge plug-in hybrid models because they’ll be the cheapest to own.

There are some upgrades worth considering though. The Volvo XC40 is one of the safest new cars on the road as standard, but it is available with extra kit such as blind-spot monitoring. You can also get an advanced cruise control system which will keep you a safe distance from the car in front, will steer to keep you in lane and even work in stop-start motorway traffic.

Of course, all this adds to the price, but the XC40 is still quite competitive for a posh small SUV – but check out our Volvo XC40 deals to see how much you can save on one. Or click the links below to get offers on our recommended XC40 model. 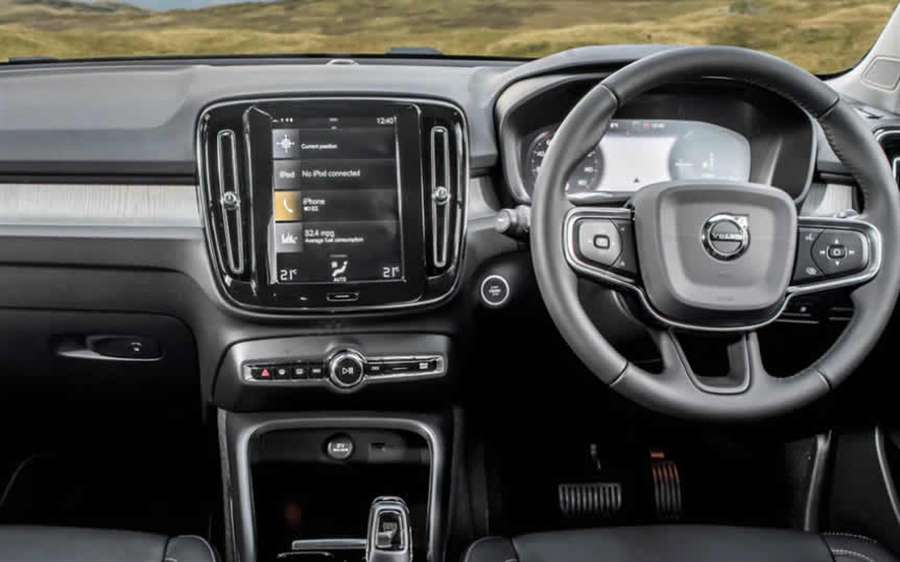 How practical is it?

The Volvo XC40’s interior has room for four adults and an impressive amount of storage space in the doors. The boot isn’t the largest, but it is well designed and packed with features

The Volvo XC40’s interior has a classy minimalist design and an eye-catching infotainment screen. Sadly, it’s not the easiest system to use and the XC40 also suffers from patchy build quality.

The Volvo XC40’s interior has a classy minimalist design and an eye-catching infotainment screen. Sadly, it’s not the easiest system to use and the XC40 also suffers from patchy build quality.

The Volvo XC40’s interior has a premium look and feel that marks it out from well-built but dowdy mainstream alternatives such as the Volkswagen Tiguan. In fact, it’s classy enough to be considered an alternative to posh SUVs such as the Mercedes GLA, Audi Q2 and BMW X1.

That said, none of them have the Volvo XC40’s portrait style, 9-inch infotainment screen. It means that conventional buttons are kept to a neat single row in the centre of the dash, including a large volume knob in the centre that is easy to reach for when you’re on the move.

The infotainment system’s design is exactly as you’ll find on larger Volvos, but the XC40’s youthful, bright Lava Orange carpet and door trims (available as an option on R-Design models) certainly aren’t.

That’ll help the XC40 appeal to you if you’re young. You’ll also like its soft-to-the-touch plastics and expensive-looking trims. The only problem is the construction, which has inconsistent gaps between panels that you wouldn’t find in an Audi Q2.

Inscription models are the poshest, and come with a full leather interior and unvarnished wooden trim pieces that looks as good as anything Mercedes has to offer.

If you’ve ever used an Apple iPad then you’ll have no problem operating the Volvo XC40’s 9-inch infotainment display. It lets you swipe between menus and pinch to zoom in on maps, and has a conventional ‘home’ button at the bottom of the screen so you can skip quickly to the main menu. 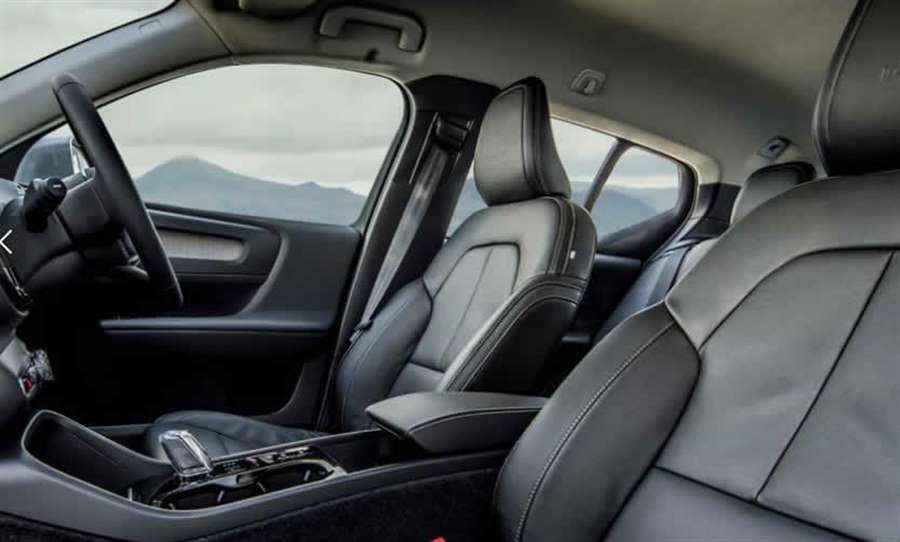 Entering a postcode is easily done while you’re parked – either by writing in the letters with your finger or by typing them in via the onscreen keyboard – but it’s fiddlier to do when you’re driving than it is in the BMW X1 or Audi Q2.

In fairness, the Volvo XC40 wins some points back by offering an app for your smartphone, so you can programme the sat-nav without even having to leave the house. You can also use it to preset the cabin temperature or open the car remotely.

On top of the central infotainment screen, you get another 12.3-inch digital driver’s display that’s an option on the BMW and Audi. It’s customisable, so you can flick between conventional dials or having a large map display for the sat-nav right in front of your eyes.

Completing the Volvo XC40’s audio-visual package is a standard stereo that has a very healthy 250W output and eight speakers. That should be enough for casual music fans, but if you’re a full-blown enthusiast you’ll want to tick the box for the 13-speaker, 650W Harman Kardon system that can envelop you in a wave of sound.