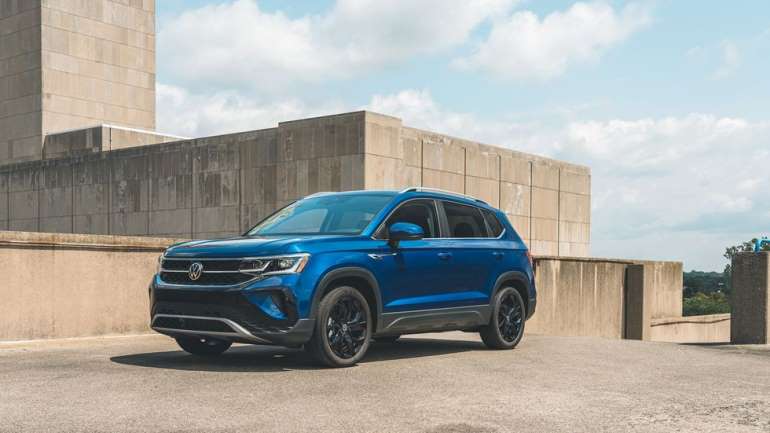 The all-new 2022 Volkswagen Taos is the product of a familiar pattern in the car business. As a particular vehicle segment grows in popularity (in this case, crossovers), manufacturers tend to enlarge and differentiate their entries to make room for new models that fill the newly created gaps in their lineup. With VW's range of SUVs in the United States swelling to include the compact Tiguan, mid-size Atlas and Atlas Cross Sport, and the electric ID.4 (sort of an SUV, we guess), a vacancy opened up in the increasingly popular subcompact space, among the likes of the Jeep Compass, Kia Seltos, and Subaru Crosstrek. It also helps that VW won't be offering Americans a regular TSI version of its latest Golf hatchback, which we're still sore about. At least the Taos is a compelling little crossover on most fronts.

"Little" is sort of misleading, though, as the Taos is one of the larger players in its class. Its MQB-based architecture rests atop a wheelbase of either 105.6 inches for the all-wheel-drive variant or 105.9 inches for the front-driver. It has a huge back seat for a subcompact SUV, and its capacious and easily accessible cargo hold can swallow 25 cubic feet of stuff behind the rear seats (28 cubes if you forgo all-wheel drive). On the road, if you don't know to look for its distinguishing design cues—a broad LED lightbar that connects the standard LED headlights plus chrome TAOS lettering on the rear liftgate—you can easily mistake it for a (slightly) larger Tiguan. VW says the name Taos refers to the rugged, picturesque town in New Mexico. We didn't go there for our drive, but we did traverse our local Michigan haunts in both of the vehicle's primary configurations.

Powering the Taos is a new 1.5-liter version of the EA211 turbocharged inline-four—a 1.4-liter EA211 is found in the Jetta sedan. Aided by the boost of a variable-geometry turbocharger, the engine purrs willingly to its 6400-rpm redline and produces a respectable-if-not-quite-spirited 158 horsepower and 184 pound-feet of torque, the latter from just 1750 rpm. That's less grunt than you'll get from a top-spec 175-hp Seltos 1.6T or a 250-hp Mazda CX-30 Turbo, but it's perfectly adequate for casually merging onto highways. Standard front-wheel-drive models pair the turbo-four with a conventional eight-speed automatic transmission. All-wheel-drive versions get a seven-speed dual-clutch automatic, which VW calls a direct-shift gearbox (DSG). The company says this split allowed it to focus both on greater fuel efficiency with the eight-speed and a sportier driving character with the dual clutch.

Our test car was a front-wheel-drive SEL model, which ambled to 60 mph in 7.4 seconds and covered the quarter-mile in 15.8 seconds at 87 mph, making it slightly quicker than the latest Subaru Crosstrek with a 2.5-liter flat-four and significantly fleeter than a Jeep Compass. The more-powerful turbocharged Kia Seltos, however, is roughly a half-second quicker both to 60 and through the quarter-mile.

That said, the front-drive Taos is the fuel miser's choice, earning an EPA combined estimate of 31 mpg, versus 28 mpg for all-wheel-drive models. Our example fared well in the real world with a 30-mpg average, and it posted an impressive 40 mpg on our 75-mph highway test, beating its federal rating by 4 mpg. Both the aforementioned Subaru and Kia managed only 30 mpg on our highway run. But the all-wheel-drive model's DSG isn't as convincing in its role as a sporty transmission. While its shifts are generally quick and well-coordinated at speed, it lacks the eight-speed's unobtrusive smoothness, being relatively clumsy around town and under quick on-off-on throttle applications. Only all-wheel-drive variants get a drive-mode selector with Normal, Eco, Sport, and Individual settings, but even in its most aggressive mode the dual clutch hesitates between upshifts when accelerating briskly. There are no steering-wheel paddle shifters, so we mostly let the DSG pick its own gears rather than use the shifter's sluggish manual gate.

The other significant difference between the two drivelines is the rear suspension. The front-wheel-drive Taos features a torsion beam at the rear, while the all-wheel-drive model employs a multilink setup. This is why there are two wheelbase lengths. The multilink's greater composure and more substantial feel make the all-wheel-drive Taos our clear choice. Though the all-wheel-drive Taos adds a claimed 255 pounds of additional mass, its more sophisticated suspension fosters greater driver confidence by bringing better body control. We'll have to wait for a second test car to see if this more-refined character translates to better grip than the modest 0.83 g that the front-driver exhibited on the skidpad.

Braking ability is adequate and is controlled via an easy-to-modulate pedal, despite some mushiness in the first inch or so or travel. We recorded a so-so 176-foot stop from 70 mph. All of the examples we've driven have rolled on 18-inch wheels (17s are standard, 19s are optional), with our test car's wrapped with Bridgestone Turanza LS100 all-season tires. With decent ride comfort and reasonably low levels of interior noise—68 decibels at a 70-mph cruise; 73 at full throttle—road isolation is good for a vehicle that starts at $24,190. Just don't expect Golf levels of agility from the Taos's extra girth and higher center of gravity.

From the low liftover height of its cargo floor to its rear climate-control vents to its ability to easily accommodate six-plus-footers front and rear, the Taos's interior is highlighted by its functionality. This subcompact feels solidly built, and material quality is mostly commensurate with its price, although the hard, shiny plastic dashtop panel looks chintzy, especially in the top-spec SEL models that go for more than $30,000. While not boldly inspired, the Tao's cabin does benefit from contoured trim pieces and contrasting colors that lend it some character. Soft-touch materials are soft enough and well placed, and there's VW's familiar and nicely thick-rimmed steering wheel. Seating choices include cloth upholstery for base models, leather at the top of the range, and a leatherette/cloth combo with grippy inserts for mid-level SE trims. All offer good comfort and excellent visibility.

At 72.5 inches, the Taos is actually a hair wider than the one-size-up Tiguan and feels similarly spacious in terms of elbow space. Unlike the Tiguan, there's no available third row of seats. Base models get an 8.0-inch digital instrument cluster and a 6.5-inch center touchscreen, with the displays in higher trims increasing to 10.3 and 8.0 inches, respectively. We like that the Taos sticks with VW's more familiar infotainment system rather than adopting the newer, less-intuitive version in the ID.4 that we're still warming up to. Ambient lighting, automatic headlights, and VW's App Connect smartphone integration system all are standard.

Additional microprocessors control the IQ.Drive bundle of active-safety features: stop-and-go adaptive cruise control with semi-automated assistance, active blind-spot monitoring, lane-keeping assist, automatic forward-collision warning, and emergency braking. IQ.Drive is a $895 to $995 option on lesser S and SE trims and standard on the top SEL. Notable extras include a heated steering wheel, a panoramic sunroof, and a yet-to-be-released Basecamp appearance package that will add a touch of off-road flair.

Coincidentally, the starter S model's competitive $24,190 base price is the same as that of the outgoing Golf hatchback that the Taos more or less replaces. Budget $28,440 for the SE trim and a somewhat substantial $32,685 for an SEL model like our test car, plus another $1450 to $2045 if you want all-wheel drive. Depending on the configuration, those prices position the Taos awfully close to certain versions of the grander Tiguan, which starts at $26,440. Yet, considering the Taos's generous packaging and strong roster of equipment, potential Tiguan buyers won't have to sacrifice much if they step down to this new lower rung in the brand's model range. The Taos isn't the fun-to-drive substitute for the Golf that we'd prefer, but it does make a solid anchor for VW's SUV lineup.