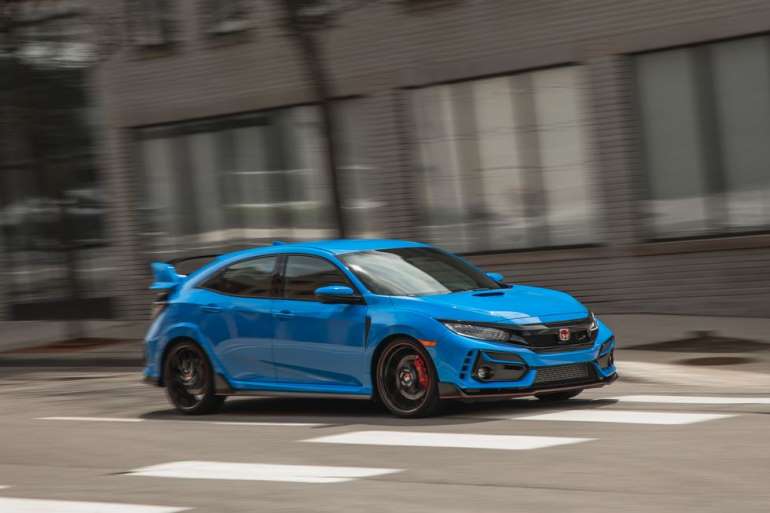 Honda makes the bonkers Civic even better by adding features, retuning the chassis, and tweaking the hatchback's still polarizing styling.

Everyone is seeking a distraction these days. The crumbs collecting in the seat of our racing simulator and the growing pile of empty cans beside it suggest that we've spent an unhealthy number of hours lapping computerized cars around circuits in Forza Motorsport. Perhaps it's the fleeting pleasure those pixelated races provide that made our hands-on experience with the revised 2020 Civic Type R feel like Honda gave us a healthier way to seek catharsis. 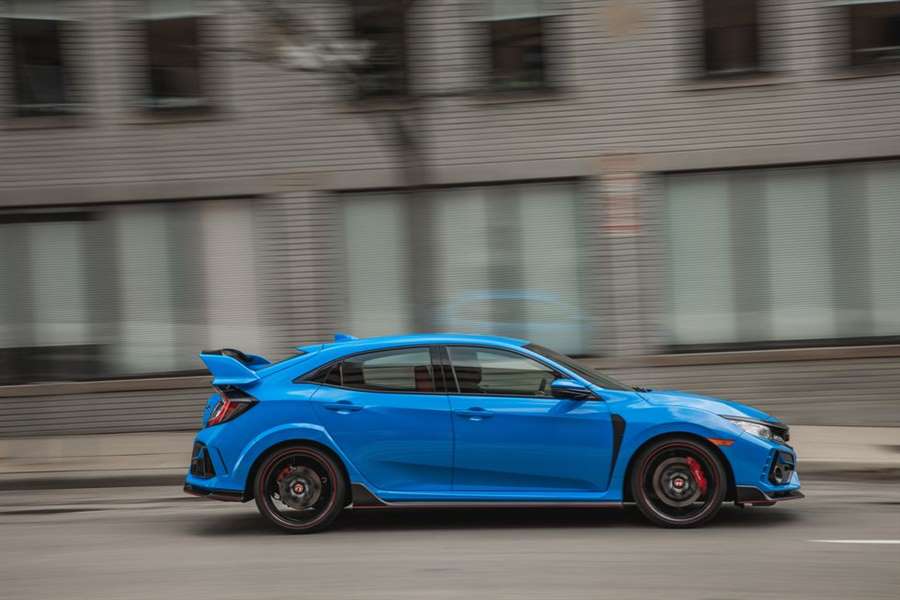 In southeast Michigan, our favorite paved playground, the loop we employ to select our 10Best list every year, lives close by. The drive there includes enough highway time to allow plenty of peepers to gawk at the Type R's gloriously juvenile bodywork. Its bulging front fenders, countless aero bits, and distracting (yet functional) wing are made more obvious by the Type R's new brilliant Boost Blue hue, which is the least subtle update Honda introduced on the 2020 Type R. (We expect an all-new Civic Type R for the 2022 model year). Other exterior revisions include body-colored trim on both bumpers, a larger grille opening that improves engine cooling, and, to add back some lost downforce from the new grille, a reshaped front spoiler. While nothing will ever convince the haters that this Civic looks badass, it's hard to deny that the Japanese-designed Batmobile draws as much attention as significantly more expensive metal. Apart from some dealer-installed accessories, the no-cost paint colors are the only options. Our 2020 copy cost $37,990, which is only $735 more than it did last year. 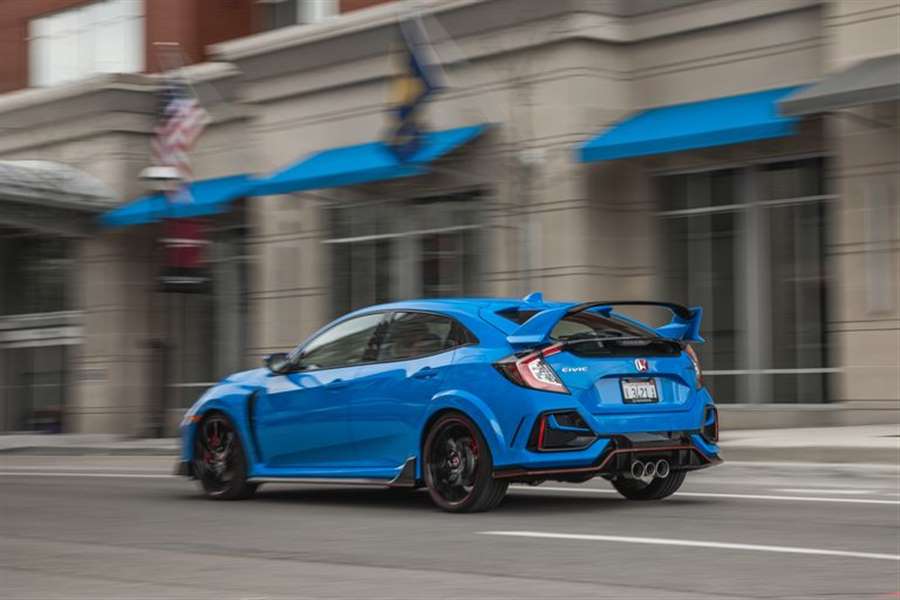 The Type R looks as out of place on the interstate as Marilyn Manson performing at Sunday service. Although our long-term 2019 Civic Type R has revealed that extended road trips are not this car's strong suit, we had just a short interstate blast in the 2020 car before we reached our destination. Those outrageously red front seats are more comfortable than they look. And like lesser Civic hatches, the Type R has an Uber-grade back seat and sizable cargo space behind it. The 2020 model replaces the leather on the steering wheel and shift boot with a racier microsuede material. A new teardrop-shaped shifter hides a 90-gram counterweight to deliver better feel. Somewhat surprisingly, Honda kept the aluminum knob, which burns your hand in the summer and bites it in the winter.

The 2020 Type R's turbocharged 2.0-liter inline-four makes the same healthy 306 horsepower and 295 pound-feet of torque as before. That power is dispatched to the front wheels through a helical limited-slip differential and a six-speed manual transmission, which has short gearing that prioritizes rapid acceleration. While the engine starts making power around 2500 rpm, the party is pretty tame until the tach needle passes 3500 rpm, unleashing a thrilling blast to redline that conjures the high-revving VTECs of yore. It also provides enough shove to ensure that the Daewoo Lanos with a duct-taped wing that's lingering in your mirrors can only dream about overtaking you. 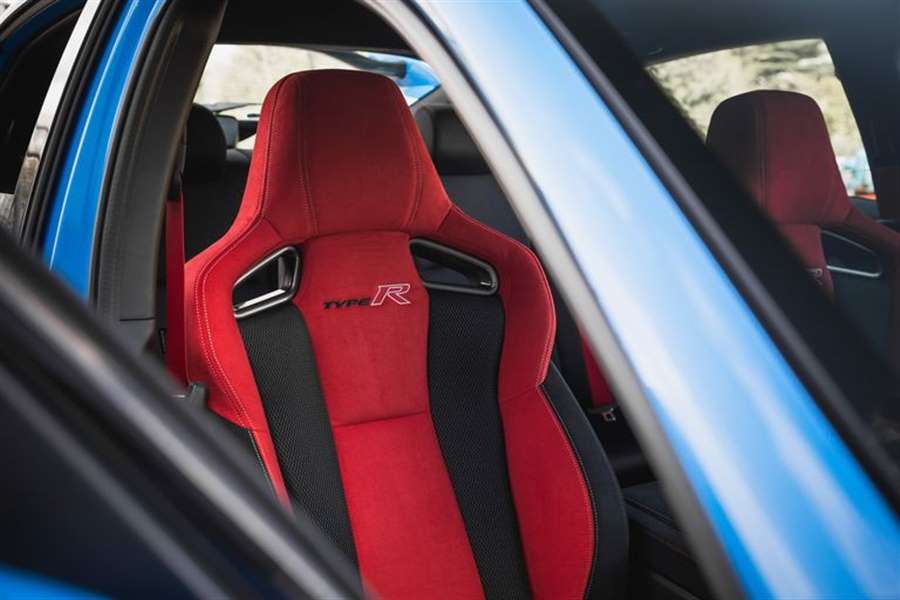 In the 2020 model, we recorded a 4.9-second dash to 60 mph and a quarter-mile pass of 13.4 seconds at 108 mph—solid runs that are both impressive for a front-wheel-drive car and similar to those of previous Type Rs we've tested. But the hottest Civic's reign as the quickest front-driver has come to an end. The updated 2021 Hyundai Veloster N with its new optional automatic transmission just beats the Honda to 60 mph by a tenth of a second. The 302-hp 2020 Mini John Cooper Works GP is a tenth quicker still to 60 mph (4.7 seconds) and posts an even stronger 13.1-second quarter-mile at 110 mph. Even more significant is that the Mini GP snagged the title of fastest front-driver ever at this year's Lightning Lap, beating the Type R's time around our 4.1-mile configuration at Virginia International Raceway by just 0.1 second. 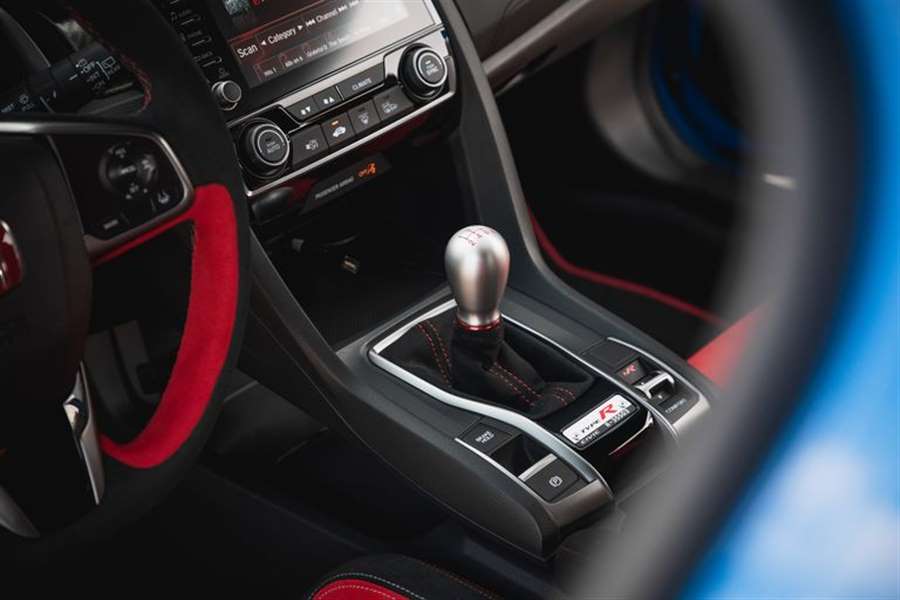 The Type R’s trademark triple-outlet exhaust issues a droning boom unless you’re working the engine hard enough to push exhaust through the center pipe and its resonator. The odd arrangement is intended to add character to the engine's soundtrack, but it only emphasizes our disappointment. The mightiest Civic sounds subdued, especially compared with the firecracker soundtrack of the Veloster N. Honda apparently realized this disparity and sought redemption by installing Active Sound Control on all 2020 models. This new feature artificially enhances the Type R's engine sounds using the audio system, and the intensity increases as you move through the drive modes. Too bad it's really only noticeable during large blips of the throttle—during heel-and-toe maneuvers or rev-matched downshifts—but even then, it just sounds like an auto-tuned bumblebee blasting from the speakers. The 88 decibels we recorded at full-throttle and 74 decibels at a 70-mph cruise are in line with other Type Rs we've measured, although those figures are 3 and 2 decibels quieter, respectively, than what our long termer produced when it was new.

As we approached the hard right turn that begins the clockwise circulation of the loop, we killed the climate system and the radio to focus on the Type R's chassis improvements. The 2020 car gets new lower-friction ball joints and updated bushings for the front suspension, revised rear bushings that are stiffer laterally, and retuned adaptive dampers that now sample the road 10 times quicker. The front brakes are fitted with more fade-resistant pads and new two-piece floating rotors that are no longer cross drilled that cut unsprung weight by 2.5 pounds per side. These careful tweaks are hard to perceive without driving the new and old models back-to-back, and they don't produce any measurable difference at the test track. The 2020 model returned a familiar (and excellent) 1.03 g of grip around the skidpad and a 148-foot stop from 70 mph. However, we did notice the new car's firmer brake pedal, which Honda says has 17 percent less initial lost motion before the pads meet the rotors (and the Type R already had spectacularly good brake feel). 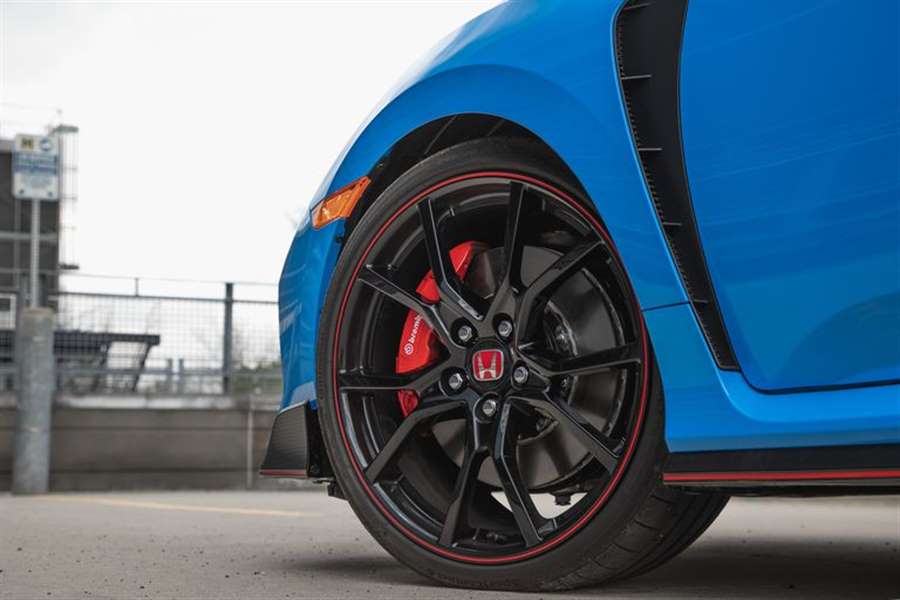 Our route includes several places where you can accelerate hard from a stop, and that’s one of the few situations where the Type R’s front-wheel-drive layout feels like a liability. The car's Continental SportContact 6 tires—sized 245/30ZR-20 all around—frantically scramble for traction as the turbo spools up and the tach approaches the 7000-rpm redline. While the front tires struggle to find grip right off the line, they’re at least not tugging toward the ditch, as the Type R's dual-axis strut front suspension magically vanquishes the dreaded front-drive torque steer. Once you’re moving, flowing along a ribbon of twisty road in third gear, the lack of all-wheel (or rear-wheel) drive feels irrelevant.

Despite pancake-thin sidewalls and huge 20-inch wheels, the Type R’s ride is almost unbelievably free from the expected jolts and jitters. While there's a noticeable change between the softest damper setting (Comfort) and the firmest (Plus R), the Civic feels unflappable in either mode while roller-coasting up and down the loop's esses. Steering effort incrementally increases with each of the three drive modes (the default, appropriately, is Sport) and every note reminds us of Porsche's divine composition.

The talkative wheel is a major factor in the Type R's preternatural ability to turn any road into a racetrack. This is a car that transforms grocery runs into hot laps, commuting into rally stages. While it shares an aging infotainment system and its standard driver-assistance features (such as adaptive cruise and lane-keeping assist, which are new for 2020) with the regular Honda Civic hatch, the alpha-dog model looks and feels like an altogether different car. It’s a raw, visceral machine, an IRL antidote to virtual living. You might have a million-dollar racing simulator, but those screens can’t compare with the view through a Type R’s windshield.

Tagged under
More in this category: « 2020 Honda Civic Si Long-Term Review: The Goldilocks of Sports Sedans A 2021 Honda CR-V Hybrid Sidles into Our Long-Term Fleet »