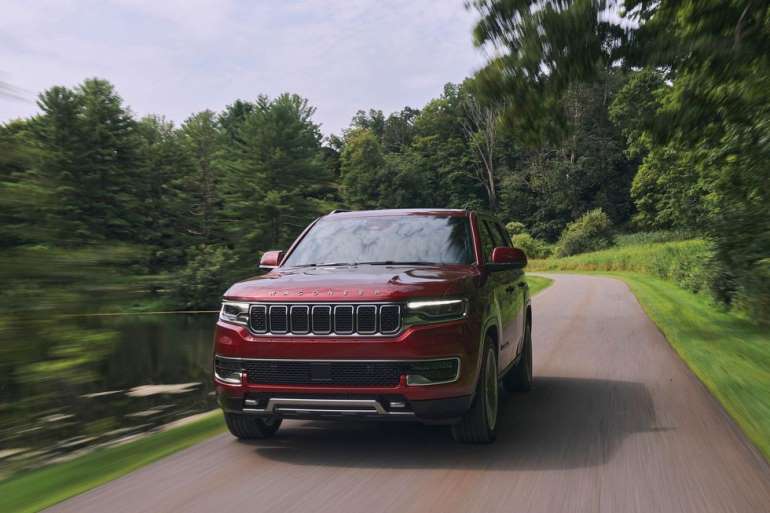 It's hardly that simple, of course. Unlike the Ram 1500, which the big Jeep's frame is derived from, the Wagoneer benefits from an independent rear suspension that uses a lot of aluminum, as well as a number of other chassis tweaks to improve rigidity and on-road manners. Still, these aren't lightweight trucks any more than they are small ones. Even with its composite liftgate and aluminum hood, fenders, and doors, the Wagoneer checks in at 6200 pounds. Further up the line, the more feature-filled Grand Wagoneer can rise as high as 6450. All of that heft is hard to ignore when maneuvering these brutes, independent suspensions or not.

Around town, a little residual body-on-frame jiggle runs through the structure after abrupt inputs or bumps. Out on twisting roads, the big truck rolls—you should really let the inertia settle before turning the wheel in the opposite direction—and to maintain the vehicle's path, the steering needs constant attention. That softness pays dividends on the highway, where the ride is quite plush and appropriate for road trips. The throwback two-spoke steering wheel offers a vague connection to what's happening at the tires, and the overall feel is light.

Buyers will have to parse through seven Wagoneer and Grand Wagoneer trim levels to find their best match. Wagoneers come three ways, all powered by Chrysler's Hemi 392-hp 5.7-liter V-8, which is backed by the company's 48-volt eTorque hybrid system and an eight-speed automatic transmission. The electric assist adds 130 lb-ft of torque on initial throttle application and makes for one of the more seamless start-stop systems we've experienced. Equipped with the optional 3.92:1 axle ratio, the combo moves the Wagoneer's mass off the line smartly, and the smooth V-8 doesn't leave you wanting on the highway.
VIEW PHOTOS

Grand Wagoneers come in four versions, each with a beefy 6.4-liter V-8. A GW-exclusive intake manifold and exhaust cap the fun at 471 horsepower and 455 lb-ft of torque—14 horses and 20 lb-ft short of what the engine makes in a Scat Pack Challenger. A robust torque curve gives an easy initial surge; stay in it and you'll find that the big V-8 loves to run to the top of its rev range. It sounds great, too, if a little out of place. There's no hybrid system here, but like the 5.7-liter, cylinder deactivation and variable valve timing help make the most out of a gallon. The Grand Wagoneer feels a bit livelier with its larger engine—Jeep claims a 60-mph time of 6.0 seconds—but the lesser Wagoneer, with its electrically assisted 5.7, seems quicker than its claimed 7.3-second time to 60.

Buyers might be more interested in the EPA fuel-economy numbers: Four-wheel-drive Wagoneers carry labels of 15 mpg in the city and 20 on the highway; their 17-mpg-combined rating is 1 mpg short of the Chevy Tahoe with a 5.3-liter and the Ford Expedition. Grand Wagoneers manage up to 15/13/18 mpg (combined/city/highway), which makes them similarly less efficient than the Cadillac Escalade and Lincoln Navigator. The soon-to-be-released rear-wheel-drive Wagoneer Series I will be good for an additional 1 mpg combined.

Wagoneers come standard with a load-leveling setup for the rear suspension. Four-corner Quadra-Lift air springs are optional on the Series II; Series III and Grand Wagoneer models get it standard. The system can raise the truck by 1.7 inches to give it 10.0 inches of ground clearance and up to 24 inches of water-fording capability. Additionally, it'll drop the truck 0.6 inch at speed for better aerodynamics, plus it can lower the vehicle when parked an additional inch to aid ingress and egress.

But all of that kind of misses the point: If you're shopping cars this big, the last thing you're thinking of is hitting fire roads—or for that matter, performance on winding country roads. No, it's what's inside the box that matters, and Jeep designers nailed it.

The Grand Wagoneer in particular offers a legitimately luxurious experience, not just for its many creature comforts, but in the interior design itself. There's a lot of wood flowing through the dash and center console. If sculpted American walnut isn't your taste, you can opt for aluminum trim instead. The seats are large and comfortable, and as you might guess, all rows inside the gigantic cabin are easily accessible. High-end details are dotted throughout, such as the knurled-aluminum gear-selection knob and the leather-wrapped start button (yes, you read that correctly). In typical Jeep fashion, the cabin is filled with reminders of what you're driving. "Grand Wagoneer" appears in large lettering on the steering wheel, the sides of the seats, and inlaid in the wood in front of the passenger's seat. 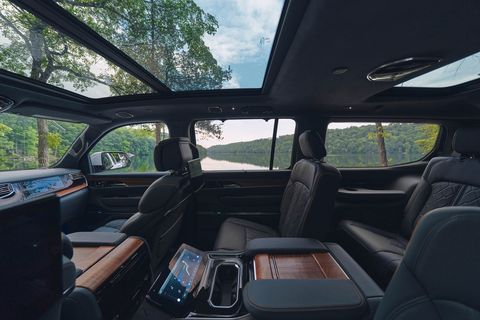 The upright, boxy exterior shape is sure to polarize, but that form gives the Wagoneer best-in-class overall passenger volume, second- and third-row legroom, third-row headroom, and cargo volume behind the third row. It's seriously roomy inside, enough so to warrant an optional camera for front-row passengers to see who threw something at them from the wayback.

The Grand Wagoneer features four screens up front. In addition to the digital gauge cluster, there's the big center touchscreen—12.3 inches in the Grand and 10.3 in Wagoneer—and, below it, a smaller screen for secondary controls such as seat heaters and massage. An unexpected feature: The bottom screen can flip up, revealing a useful storage cubby with power outlets behind it. Front-seat passengers get their own display flush mounted in the dash.

The sheer amount of equipment that Jeep's leviathans offer is impressive. Each trim has an extensive list of options, many unique to particular trim levels. There's an available head-up display with night vision, all the driver-assistance stuff you can imagine, Amazon Fire TV integration in the middle-row screens, and two high-end McIntosh audio systems, the grandest being a 23-speaker, 1375-watt monster with a 12-inch subwoofer. Any lingering small-big-car thoughts will be crushed by the pricing structure. Wagoneer Series II and III 4x4 models arrive at the end of the summer and start at $72,995 and $77,995, although the rear-drive version will drop the entry point to just below $59,995 when it goes on sale in the first half of 2022. Grand Wagoneer models open up at $88,995, with the top-of-the-line Series III starting at an appropriately grand $105,995.
(caranddriver.com)
Tagged under
More in this category: « Tested: 2021 Jeep Wrangler 4xe Complicates a Simple Machine Jeep Renegade review »