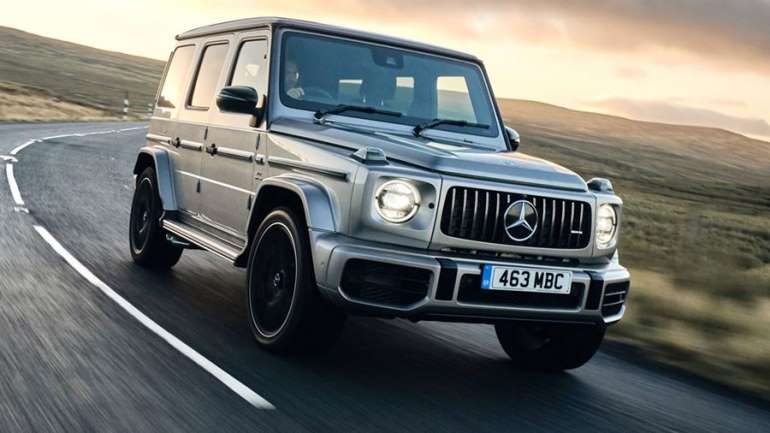 ‘The old G-Class was a second or third car for most customers,’ Gunnar Guethenke (unsurprisingly nicknamed ‘Mr G’ as the head of Mercedes-Benz’s off-road division) told us back in 2018. ‘With the new model, we think it is a viable only car.’

That was a very big claim to make. Having tested one abroad and in the UK, though, we’re inclined to agree.

This G-Class represented the biggest shake-up in the model’s 40-odd-year history; the W463 model we all know and quietly admire had been on sale from 1990 until 2018. While there’s been little arguing about the streetside posing and rap-attack creds of the outgoing G, it drove, packaged and wobbled like a car knocking on the door of its 30th birthday party. 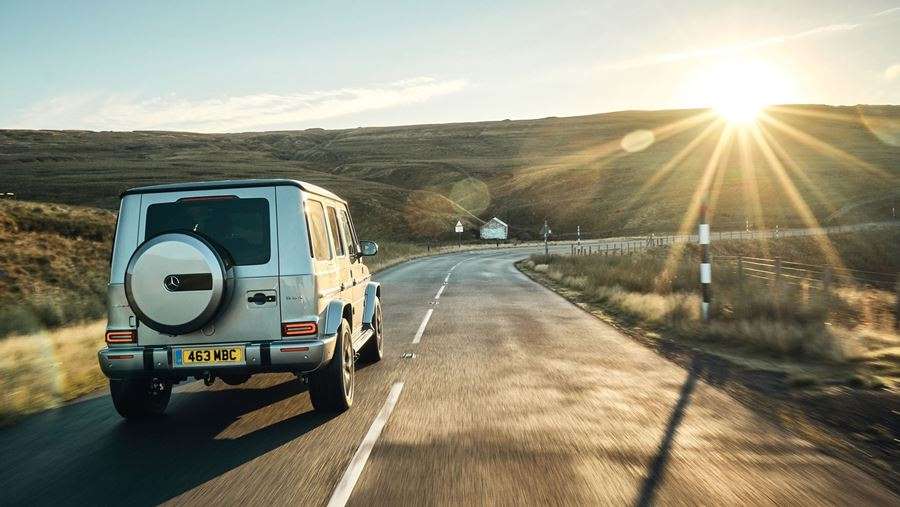 What has changed with the latest G63?

Almost everything. Only three parts are carried over: the headlamp washers, the push-button door handles and the giant spare wheel cover bolted to the rear tailgate.

It’s still based around a sturdy (but new) ladder-frame chassis, built like steel girders to support a nearby suspension bridge more than a rich person’s plaything. Off it are hung steel and aluminium body panels, cleverly designed for maximum stiffness and a little less weight (mass falls by around 170kg, to a still-portly 2.5 tonnes). 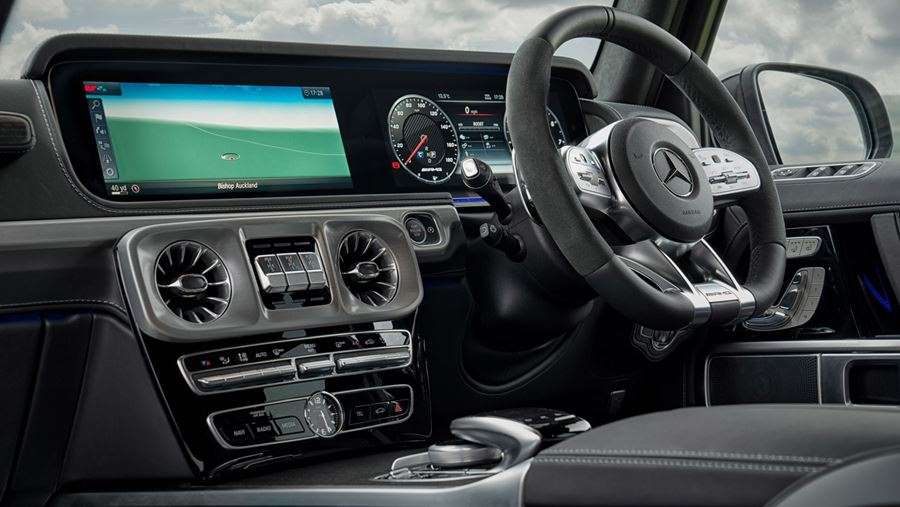 Much of that heft is attributed to the serious off-roading hardware; the new Mercedes-Benz G-Class range comes as standard with three fully locking differentials (one at each axle and a central clutch, to maintain traction in all conditions) and a low-speed transfer box. Daimler claims this provision is unique among off-roading brethren.

Climb aboard the new G and you won’t confuse old and new cabins. The old G-Class had a woefully cramped passenger compartment; your elbows felt pinched by the door cards, rear-seat passengers had nowhere to put their feet and the instruments and electrical architecture reflected the Betamax generation from which they hailed.

The new car is bigger, for starters: 53mm longer and 64mm wider, for superior packaging. It shows – even full-sized adults will be comfy in either row, and the rear bench can accommodate two, or even three, grown-ups thanks to thinner front seats and an impressively almost flat floor. The boot is an adequate 454 litres, pinched by the sub-woofer on the left and fuel tank on the right. Access it via the mother of all side-hinged, heavy tailgates which now locks into place at any extension so it won’t blow shut in a high wind.

Most striking of all is the E-class instrumentation that’s transformed the dashboard: giant twin 12.3in digital displays are standard in UK models (elsewhere you can order retro physical dials, should you fancy) and all the latest Merc trickery is present and correct. So you can now enjoy Apple CarPlay to sync your phone, skip around the menus using wheel-mounted thumb trackpads and there’s even a wifi hotspot. On a G-wagen! 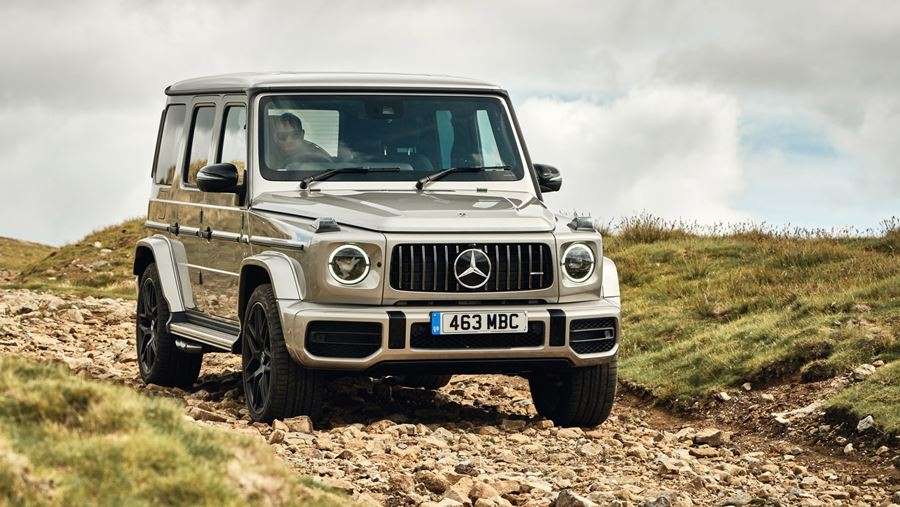 Oh, and there’s still a sturdy grab handle in front of the passenger, as a permanent reminder that this car is still all about scaling serious inclines more than the next playlist.

You quickly sense how thorough this overhaul is. The G might look incredibly similar from outside, all the way down to those faux rain gutters and sturdy exposed hinges that riff on the G aesthetic, but it’s essentially very modern. 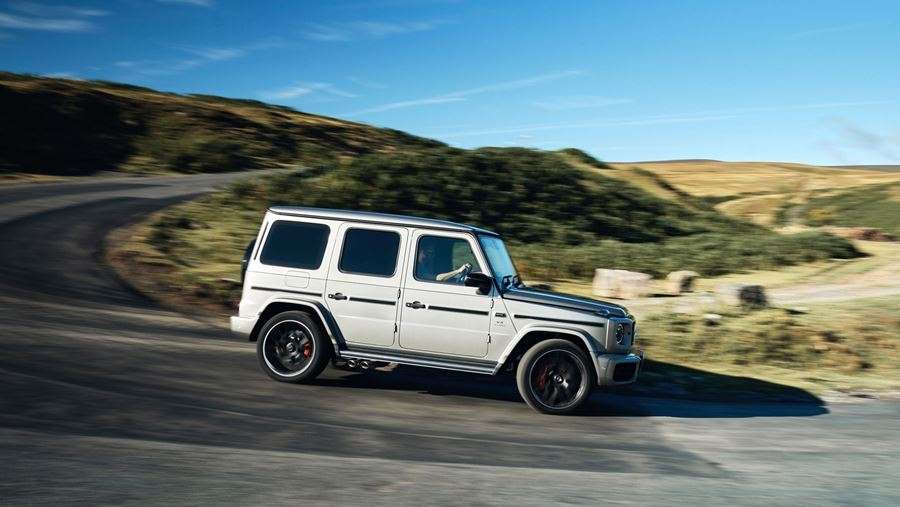 The AMG G63 So it’s neck-snappingly quick, with 0-62mph in a claimed 4.5sec and you can derestrict it up to 149mph if you’re feeling especially brave. Performance is accompanied by the rudest of V8 blare, exaggerated in Sport mode to bounce off walls and draw even more attention than the set-square boxy G-Class already musters.

The old one was fast, too, but felt like it was about to hurl you off the road at the first sign of a corner or bump. The new chassis delivers a quantum leap in ride and handling, soaking up the majority of road scars and – praise be! – delivering something approaching steering response and feel.

Thank the new electric rack and pinion steering, replacing the stick-in-porridge accuracy of the old recirculating ball set-up. Look: the new G-Class might be lighter but it’s still nearly 2.6 tonnes and you’ll never make that much metal truly agile, but the new G-Class has a damn good go at it. There’s still some hefty body roll – something you clearly have to expect from an enormous box that’s lifted several feet off the ground – but, again, it’s a marked improvement from the old one.

The chunky tyres (up to 22 inches in diameter, and down to 18s on Euro-spec models) give up the ghost first, squealing like a pig escaping the abbatoir, but body control and general poise are to be applauded. Driving the G-wagen is a lesson in upright boxiness, those perpendicular windows affording a fine view out – the bubble-wrap front indicators acting as a gun sight as you haul in the hot hatch hooligan up ahead. 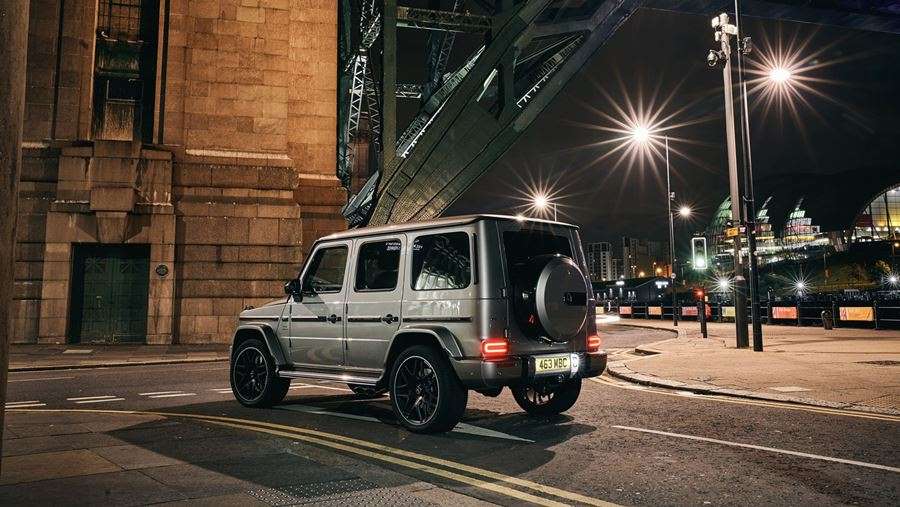 Will the new G-wagen off road like a Land Rover?

You bet. The G-Class has always been about genuine mud-plugging, as befits its ongoing military application among governments around the world. And the new one (still codenamed W463; it’s too iconic a badge to change, apparently) does more of the same.

The locking differentials help here, and you can adjust them on the fly at speeds of up to 30mph. You can feel each individual wheel grabbing at the ground and the low-speed transfer case means you can descend steep hills on tickover, as engine braking does its thing. It’s frankly incredible off-road – right up there with the best from Land Rover or Jeep.

There’s some truth to Guethenke’s claim that the new G is a jack-of-all-trades. It can be a viable only car – so long as you don’t mind the ostentation, the steep running costs and the image, which is part gangster-swagger, part military, part supercar slayer. It’s an extraordinarily versatile car and one gifted with that oft-forgotten automotive talent: character.

Tagged under
More in this category: « Mercedes-Benz EQA review Starting in 2024, Full Mercedes-Benz Lineup Will Have Autonomous Capabili »