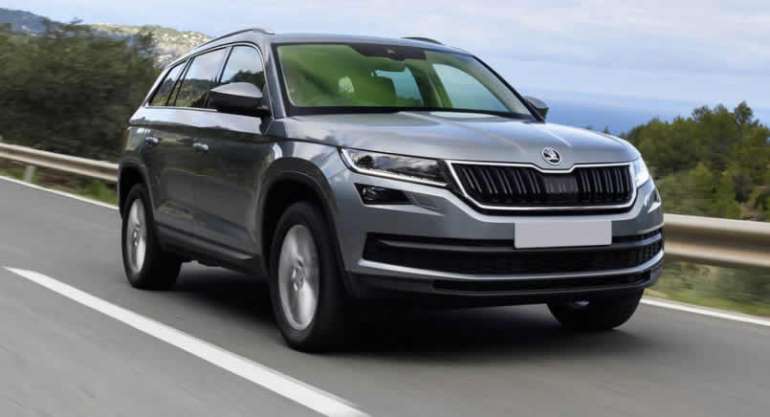 The Skoda Kodiaq is a big, practical family SUV that’s available with seven seats – although the rearmost two are only big enough for kids.

Is the Skoda Kodiaq a good car?

If you’ll forgive the tired cliche, the Skoda Kodiaq is like a Swiss army knife. It’s got all the tools to suit any situation, and once you’ve driven one, you’ll wonder what you did without it. It’s best aspect is its practicality, though, as it’s massive inside.

It’s a seven-seater SUV like the VW Tiguan Allspace and SEAT Tarraco, and it’s available in lots of configurations, from a diesel front-wheel-drive manual right up to a powerful four-wheel-drive automatic petrol called the vRS.

It’s not the biggest seven-seater, but it’s very roomy on the inside, but a seven-seater MPV like a Renault Scenic is slightly better for carrying lots of people around, because the rearmost seats in the Skoda are only useful for kids.

It’s at its best as a five-seater, because in that configuration there’s an absolutely enormous boot. In five-seat mode there’s room for everything you need for a family holiday with space left over, and with all the seats folded down, it’s van-like in there.

This is the first seven-seater Skoda has ever made, and it’s spot on for family life.
Mat Watson
carwow expert

The interior is practical too, with plenty of clever touches, but it’s also good quality. The plastics and materials used look and feel good, and build quality is high. It makes the Kodiaq feel a lot more upmarket than a Nissan X-Trail, for example. 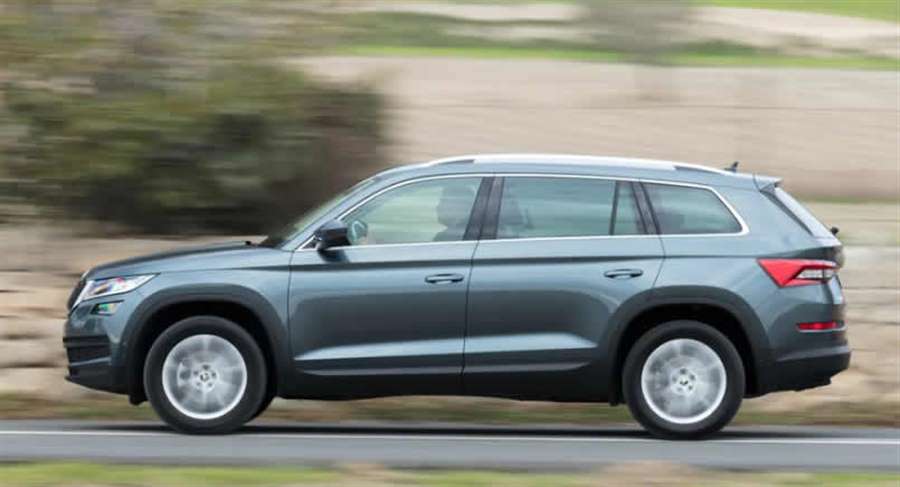 Plus, the Skoda Kodiaq is really easy to drive. There are some blind spots, but the high driving position gives a good view forward and the steering is very light. The same is true of the gearshift in manual models, and auto versions are even easier.

The suspension is a little firm around town at low speeds but it settled down nicely on the motorway, so the Skoda is comfortable overall. Versions on bigger wheels aren’t as comfortable so the lower-spec cars actually make more sense.

There’s a great range of engines to pick from, too. The 1.5-litre petrol model is a highlight, thanks to a good mix of performance and economy, but if you’re off-roading or towing in a four-wheel drive car, we’d go for the 2.0-litre diesel as it’s really torquey. The vRS model is fast but not all that fun to drive, so we’d stick with more pragmatic models.

A five-star Euro NCAP safety rating means it’s one of the safest SUVs around, so you can be relaxed about it acting as a family bus. Plus, a recent update added even more safety kit, including predictive adaptive cruise control, that steers, and adjusts your speed for you. It’s like finding another tool in your Swiss Army knife you hadn’t used before: once you know what it’s for you’ll wonder how you managed to live without it.

Read on for more information on the Skoda Kodiaq, or see how much you can save with these Skoda Kodiaq deals.

Is the Skoda Kodiaq a 7-seater?
Entry-level Skoda Kodiaq models in S trim come with only five seats, but all other versions can be had with seven seats. Pick a high-spec Sportline or Scout version and you get seven seats as standard.

Where are Skoda Kodiaqs made?
The Skoda Kodiaq is built in six factories worldwide, but the majority of cars sold in Europe come from the firm’s Czech facility in Kvasiny.

The Skoda Kodiaq’s dashboard is smartly designed and easy to use, but it doesn’t get the same high-tech features as the VW Tiguan.

Style
The Skoda Kodiaq interior is of good quality and feels well-built. The dashboard, doors and centre console are all covered in nice soft-touch plastics, while the seats – trimmed in suede-like Alcantara on high-spec SE L models – are supportive and help make the interior feel genuinely upmarket. 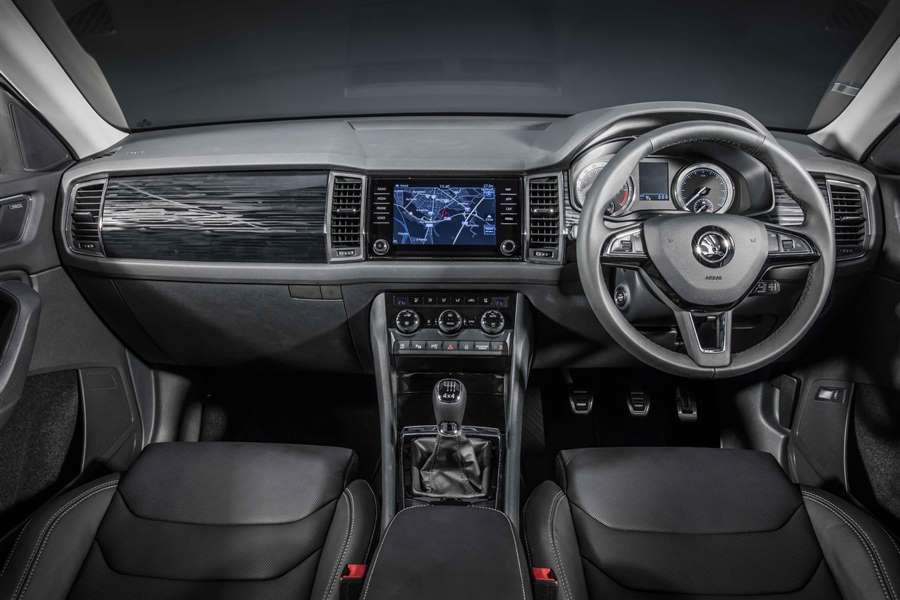 Everything is pretty easy to operate, too, as you’re not faced with a huge number of buttons; and, the knobs for the ventilation system and stereo volume are easy to operate when you’re on the move.

The standard infotainment system is operated through an 8-inch touchscreen, which is flanked by two banks of shortcut buttons and a pair of neat vertical air vents, while the gloss black wood-effect dashboard trims look great – even if they’ll scratch easily over time.

However, it’s not all good news: the second digital display in the instrument cluster looks significantly more dated – think Game Boy rather than iPad – and some materials in the rear feel brittle and cheap; but, in both cases, this is nit-picking.

Infotainment
Entry-level Skoda Kodiaq SE cars come with an 8-inch touchscreen infotainment screen. It’s sharp, bright and easy to read, and comes with a set of handy shortcut buttons to stop you getting lost in a sea of menus. Unfortunately, these buttons don’t buzz or click when you press them so you’ll have to occasionally take your eyes off the road to make sure you’re hitting the right ones.

A neat proximity sensor displays extra on-screen buttons when it detects your hand nearing the screen. This is especially useful when you’re using the built-in satellite navigation on SE L cars – it’ll flash up petrol station icons when you reach for the screen and hide them away automatically so you can see the map more clearly.

The standard sat-nav can rapidly calculate three route choices at once and you can swipe and pinch to zoom to preview its directions – just like using a smartphone. Unfortunately, the screen’s glossy finish shows up grubby finger marks like nothing else. 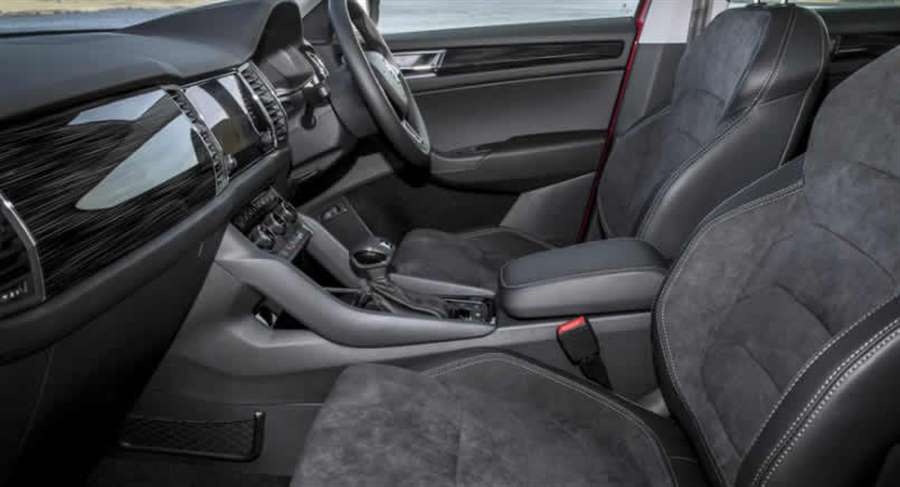 Happily, Android Auto, Apple CarPlay and MirrorLink connectivity to mirror your smartphone’s navigation on the built-in infotainment screen is standard on all Kodiaqs.

Unfortunately, if you like to stream music from your phone, the standard stereo just isn’t up to scratch. The Skoda Kodiaq’s Bluetooth connection makes your music sounds tinny and bassless – things sound much better when you connect your phone using the USB port. Upgrade to the Canton sound system and you’ll be rewarded with much clearer and bassier tunes.

Tagged under
More in this category: Skoda Karoq Review »