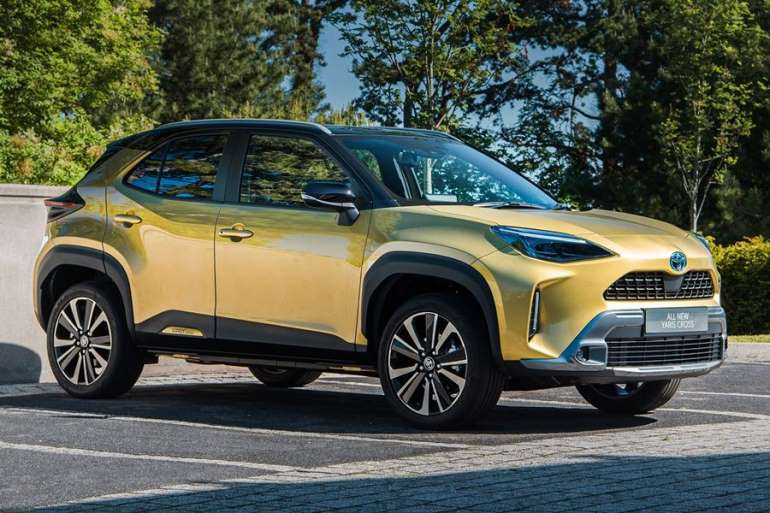 Latest small SUV is good to drive and economical

Is the Toyota Yaris Cross any good?

If you're in the market for a small SUV, you're never going to complain that there isn't enough choice out there. With models from Audi to Volvo on offer, there really is something for everyone. And yet, into this mosh pit of new car activity, Toyota has entered the fray, giving us the hybrid-powered Yaris Cross, a funky new offering based on, yes, the Yaris supermini.

It gets Toyota's new, fourth generation hybrid powertrain, and should appeal to those looking for an economical and fun-to-drive small family car that offers lots of room and a family-friendly interior. The firm says it's a genuine SUV, benefiting from all the experience it has amassed with the RAV4, with two models in the range benefitting from AWD-i intelligent four-wheel drive. 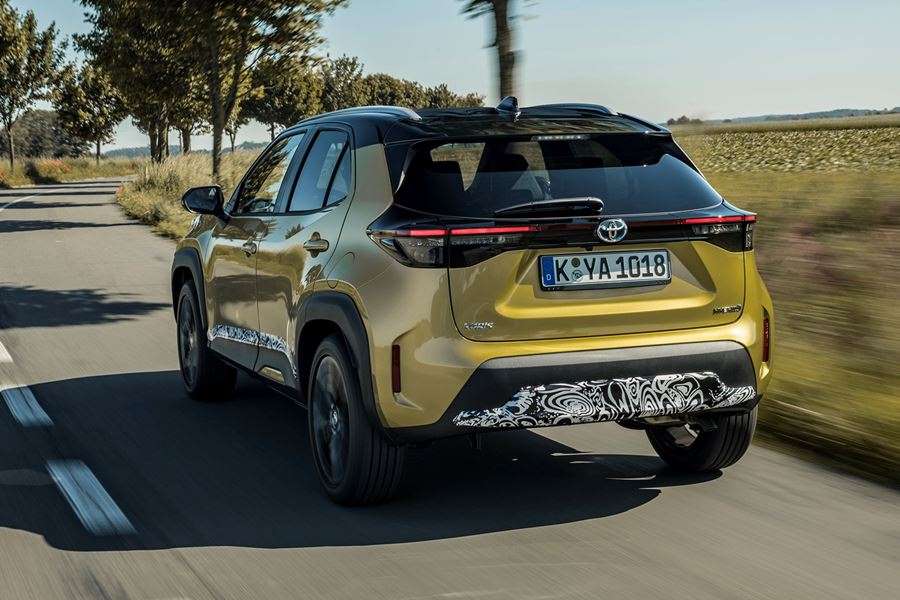 However, it's up against a herd of rivals, and it needs to be good to stand out. Top of your shopping list will be the 2021 Parkers New Car of The Year-winning Ford Puma. But the Peugeot 2008, Nissan Juke, Renault Captur, Skoda Kamiq and Volkswagen T-Cross are all highly-talented alternatives.

The good news is that it has the looks and the hardware to impress in this crowd – as our early drive of a pre-production prototype here in the UK demonstrates.

Two words comes to mind after spending time in the Yaris Cross: grown up. It might be closely related to a big-selling small car, but thanks to the high seating position and roomy cabin, it feels like a car from the market sector above. The dashboard, which is similar to its namesake, is fully featured and dominated by a high-set central infotainment screen above digital climate controls (with physical temperature control knobs – yes!) 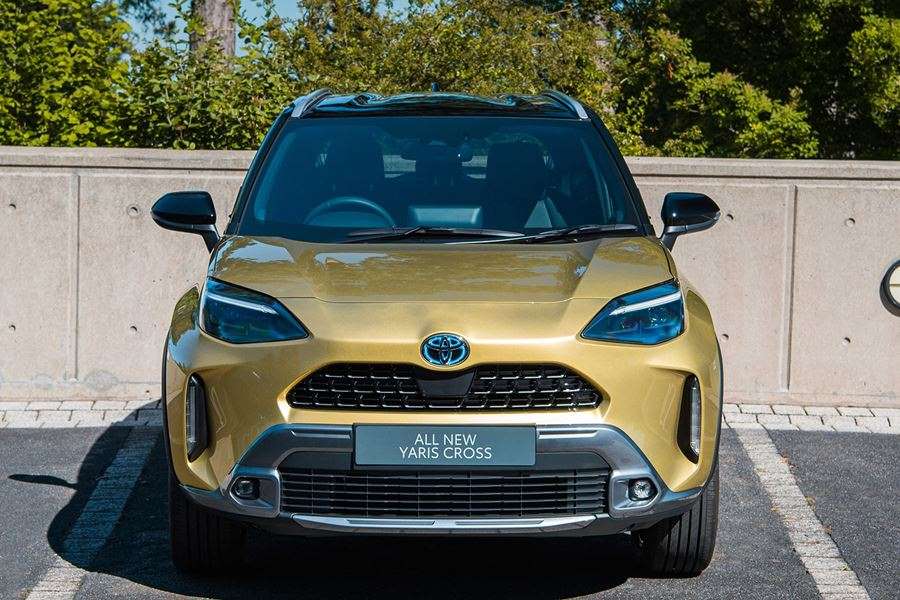 It's solid and well laid-out, with plenty of storage space for your smartphones (room and charging for two), as well as a roomy central cubby hole between the seats and spacious door bins. Our test car was marked down for extensive use of black plastics and dark materials, which means it doesn’t feel as bright and airy inside as some rivals. Having said that, for families, a dark interior is easier to keep clean.

It's 240mm longer than the Yaris hatchback, which allows more room inside. There's plenty of space up front and in the rear, with a pair of tall back-seat passengers being able to make themselves comfortable without too much difficulty. The 40:20:40 split folding rear seat, electric tailgate and split-level boot floor are all positive points. The boot floor panel can be divided in two and the luggage compartment has a flex belt system to keep items securely in place when driving. 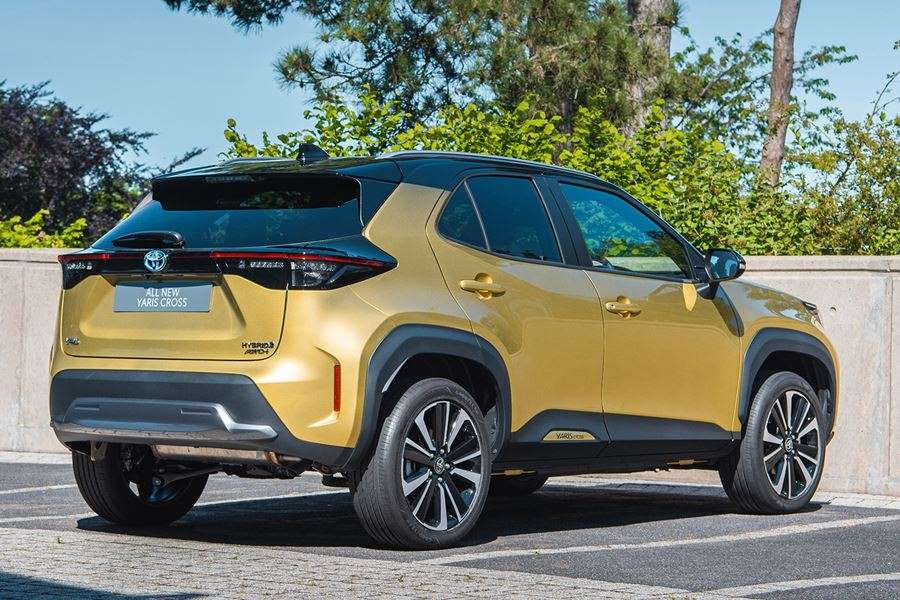 The Yaris Cross comes in only one guise and pairs a 1.5-litre, three-cylinder petrol engine with an electric motor. The total power output of the two is 116hp, which compares well with its rivals. It's based on on the 2.0- and 2.5-litre powertrains in the Corolla, C-HR, RAV4 and Camry, and is good for a WLTP combined fuel economy figure of 65.9mpg and CO2 figures of less than 120g/km (135g/km for the four-wheel drive model).

Maximum speed is 105mph and the 0-62mph time is 11.2 seconds (11.8 for the four-wheel drive version). Although those performance figures don't promise an exciting drive, it feels quick off the mark and smooth in general driving when underway, with the three-cylinder engine humming away quietly in the background. It's best suited to town work, although it's quiet and refined on the motorway, too.

As a conventional hybrid (you don't plug it in), the battery and motor are there to assist the car in certain situations, but a dashboard indictor lets you know how much time it's spent in pure EV mode, and it can be surprising just how much that is. On our mainly urban test route, it reported we were in EV mode for anywhere between 60-75% of the time. We saw it running on battery comfortably up to motorway speeds. Impressive. 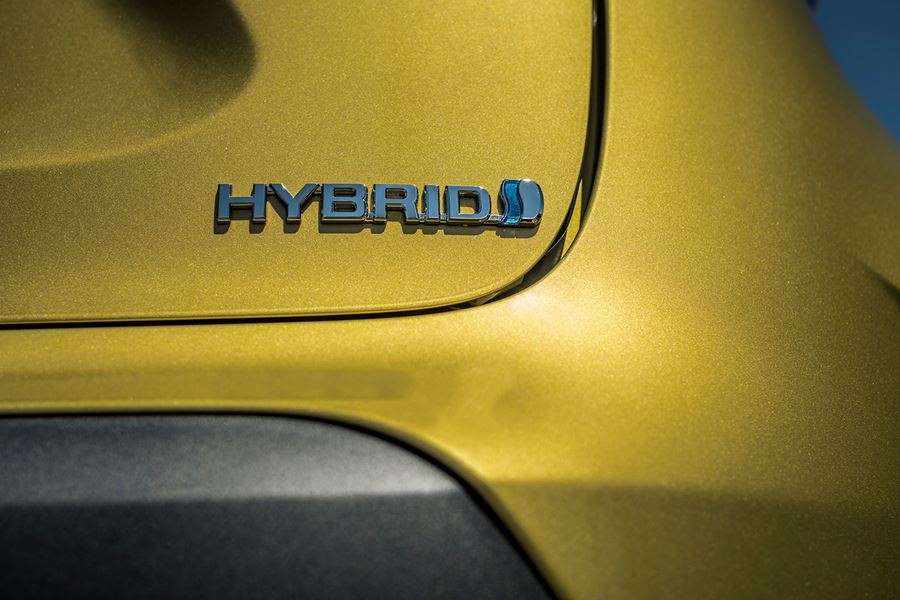 Handling is very good, too, with accurate and well-weighted steering, little bodyroll and a feeling of precision that's quite unusual in this market sector. We wouldn't describe it as sporty, but it's certainly keen and will keep you entertained on B-roads if you're cracking on. Despite this emphasis on roadholding, the ride quality is actually above average – it's firm, but well-damped, which means you'll feel the lumps and bumps, but they don't come crashing through uncomfortably. Overall, a very good effort.

There are four models to choose from, plus a fully-featured Premiere Edition version, available for one year only. The entry-level Icon model comes well-equipped, but then it should, as it's not as cheap as many of its small SUV rivals.

It comes with 16-inc alloy wheels, an 8.0-inch touchscreen infotainment set-up with Apple CarPlay and Android Auto, reversing camera and automatic headlights and wipers. Next model up is the Design, which adds larger wheels, LED headlights, aluminium roof rails and rear privacy glass.

Toyota expects the Yaris Cross Excel model to be its biggest seller, and with that, in addition to the above you also get 18-inch wheels, power-asssted tailgate with kick sensor, a larger 9.0-inch infotainment scren, Blind Spot Monitor and Rear Cross Traffic Alert with auto brake, heated steering wheel and front seats and dual-zone automatic air conditioning. 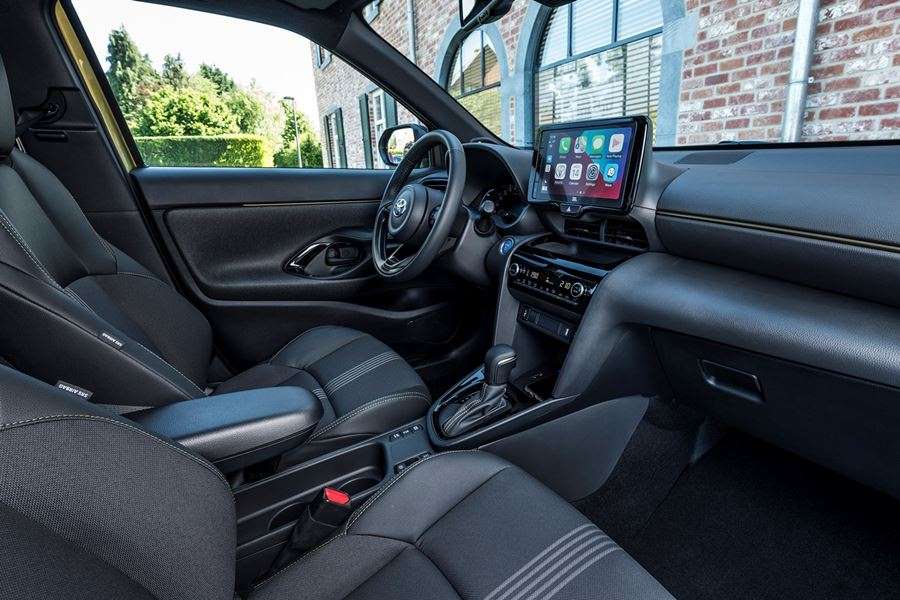 All models feature Toyota Safety Sense and driver assistance systems as standard. It can warn the driver of an upcoming collision and help steer and brake it out of trouble, or at least lessen the effects of a collision. It also has pedestrian and cyclist recognition, Lane Departure Alert and Road Sign Assist. 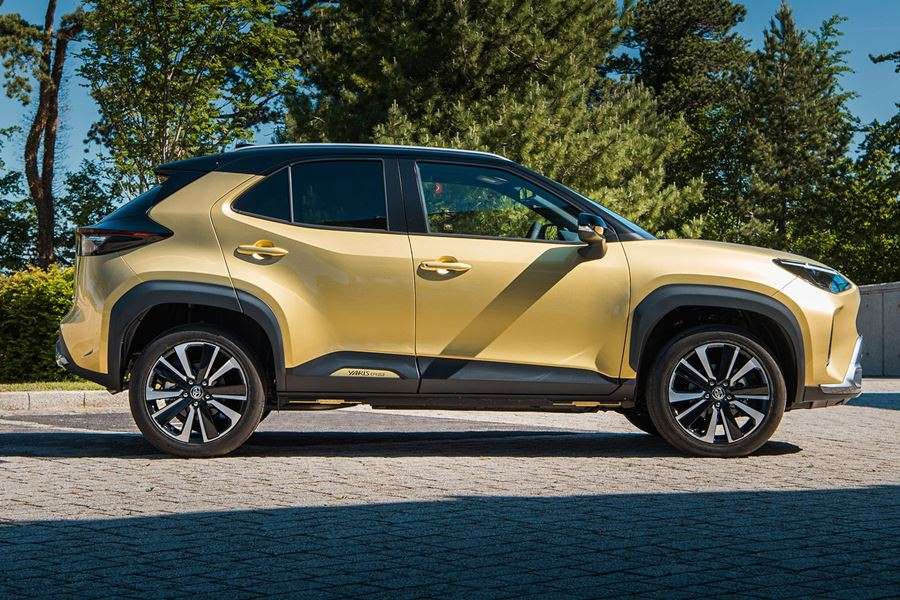 Based on the pre-production prototype we've driven so far, it's looking very good for the Toyota Yaris Cross. It's good to drive, practical, roomy for passengers and luggage and in our hands on a fairly congested test route, very economical on petrol. We'll reserve judgement on just how good it is compared with the class-leading Ford Puma and Skoda Kamiq until we've spent more time with it.

Against the popular Peugeot 2008 and Renault Captur, the Yaris Cross looks very good – it's well made and well-equipped although that's reflected in the fact there are no low-priced entry-level models to tempt you into the showroom. But it's a Toyota, so the reliability is a given, the dealer support is excellent, and the warranty cover is now an unprecedented 10 years if you keep it in the dealer network.

It's looking like a safe and sound choice, which might lack the excitement and interest of some of its rivals, but it's looking good for pain-free long-term ownership. 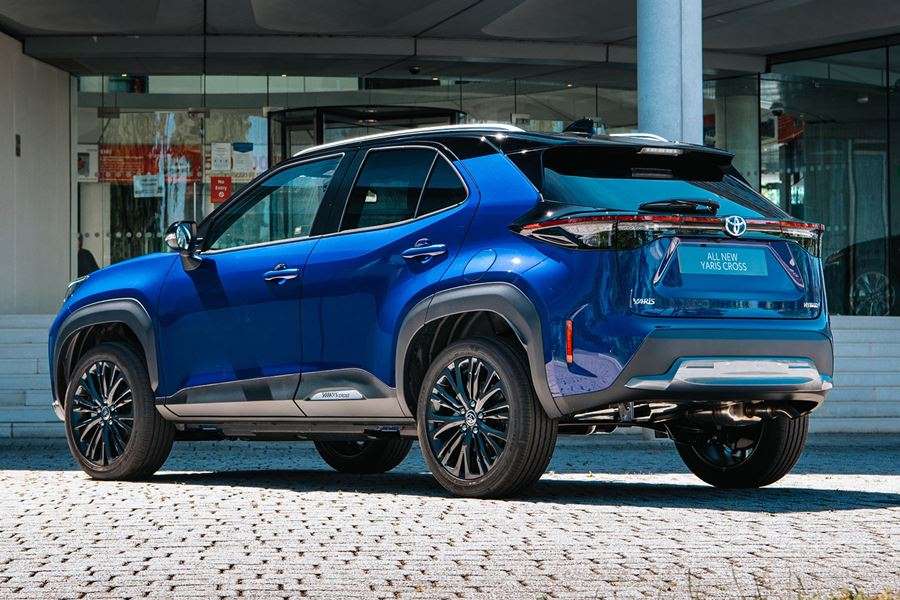 Despite the bits of camouflage tape on our test car, we can see that it's a good-looking thing, perhaps more so than the Yaris hatchback it's based on. We like the fuel consumption and low emissions, and the fact it's available as a four-wheel drive in the top-of-the-range version.

Handling and ride are definite plus points, as its refinement and smoothness in town. The driving position is good, the controls and features are all easily managed, and there isn't an over-reliance on the touchscreen for basic functions that you'll find in certain rivals.

It's a shame that in offering an all-hybrid line-up in the UK (good), as it comes at a cost (bad). With a starting price well above £20,000, there will be buyers who will be put off going for a Yaris Cross, despite it offering good value for money at a higher price point.

Tagged under
More in this category: « Exposed! All Models From Toyota And Lexus Until 2024 Toyota Mirai first drive »