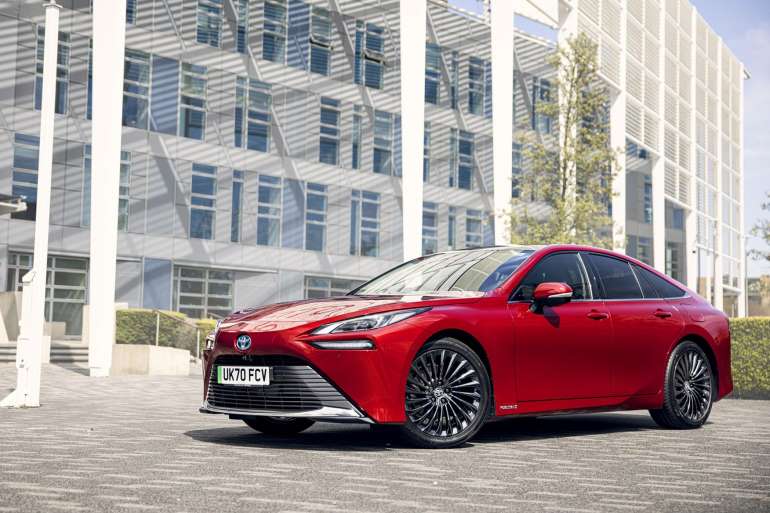 Toyota
Welcome to the future: the hydrogen-powered Mirai is the EV you fill up in just five minutes

Is the Toyota Mirai any good?

Just as the world is cottoning on to electric cars, along comes the Toyota Mirai to provide a sneak peek into what could come after the current crop of battery electric vehicles (BEVs). The Mirai and Hyundai Nexo are the only hydrogen fuel-cell cars currently on sale in the UK, using a radically different engineering solution to the question of how to store electricity on board.

Instead of requiring a large battery like a conventional electric vehicle (EV), the Mirai generates its own electricity in something called a fuel-cell stack. Three small gas tanks store up to 5.6 kilogrammes of hydrogen where a petrol car might store its fuel and this feeds the fuel-cell, where a reaction takes place between oxygen in the atmosphere and the hydrogen to create the energy to drive the electric motor. It’s an elegant engineering solution and Toyota claims a range of 400 miles between refuels. That’s considerably longer than most comparable battery electric vehicles.

The great thing is that you’re rarely aware of the clever-clogs science taking place under the bonnet when you drive along. To all intents and purposes the Toyota Mirai feels like a normal electric car to drive: it’s hushed and quiet, with instant acceleration at low speeds and there are zero emissions of carbon dioxide or nasties apart from water, giving you a smug feelgood glow behind the wheel. Best of all? It’s simple and straightforward to drive, with no confusing buttons other than an H2O switch on the dash to discharge the water from a pipe under the car.

The second-generation Toyota Mirai is less weird to look at than its gangly, angular predecessor – both outside and in. Exterior styling is much softened to give a more premium, European flavour of design, while the interior is bristling with technology, features high-quality materials and is commendably roomy in the front row. 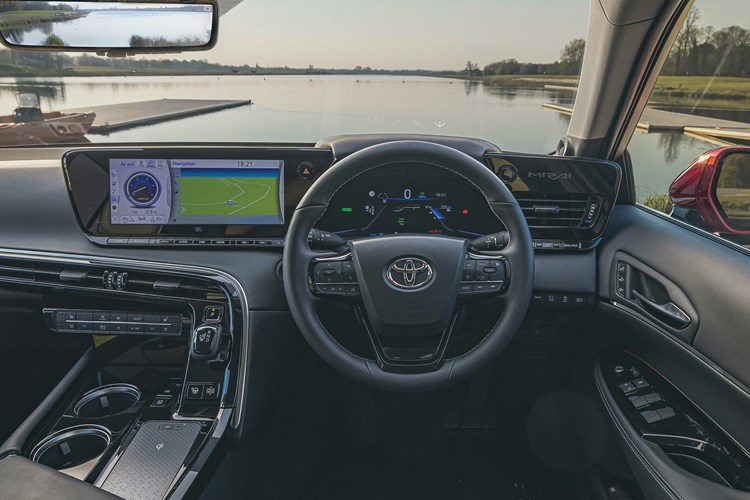 Accommodation is less generous in the back seats. Because of the need to package those three gas tanks and all the associated plumbing for the fuel-cell technology, it’s really quite cramped in the second row for a car of this size, and bootspace is compromised too.

Rear-seat passengers are disappointingly squashed in what is a 5m-long car where you might normally expect to find generous space for luggage and limbs.

Many adults’ feet and legs will rub the seatback in front of them, while taller passengers’ heads will strike the rooflining (this is compounded if you choose the top-rung Design Premium Pack’s Toyota Skyview panoramic glass sunroof). Note also that a 321-litre boot in a car this big is disappointing. 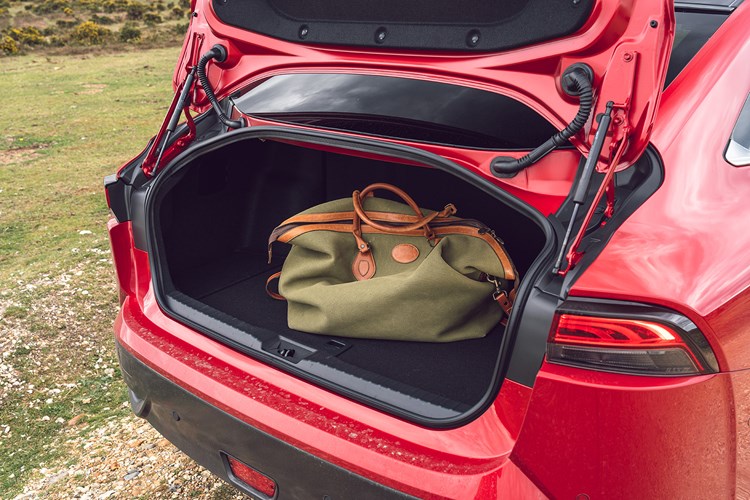 Cramped rear dimensions aside, the Mirai boasts a welcoming cabin in which front-seat passengers can enjoy spending time. You won’t mistake it for anything other than Japanese and there’s a range of graphics and switchgear that could only hail from the makers of Toyotas and Lexus products. For instance, there’s the same style of stubby gearlever that you’ll find on a Prius: it’s short and used to nudge forwards or back into Drive or Reverse (all Mirais are automatic).

Toyota Mirai comfort is first-rate: this is an extremely pampering car and one whose priorities are clearly aimed at soothing the occupants, not providing any sports-car thrills. When you first climb in, access is easy thanks to wide-opening doors and you sink into super-comfortable front seats with electric adjustment, making it very easy to find the right position.

As noted elsewhere in our Toyota Mirai review, the rear seats are less satisfactory owing to the cramped packaging, and we don’t rate your chances of using the third central rear seat, owing to the large transmission tunnel bisecting the rear compartment and tight headroom. 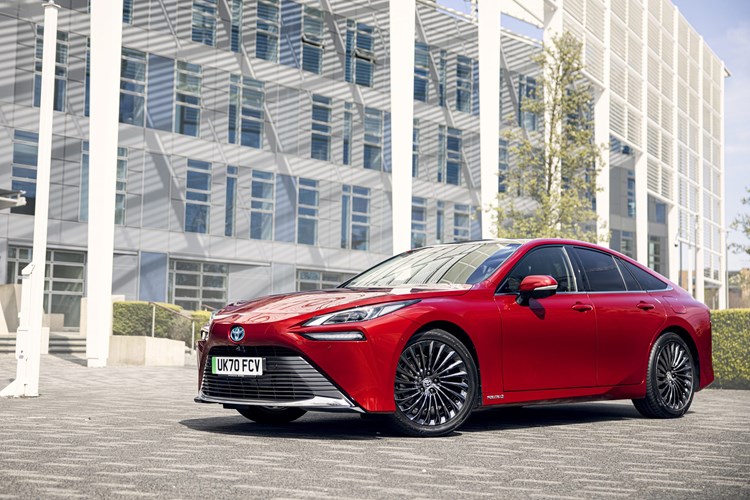 Operating the controls is pleasingly straightforward. Press the start button, select D and pull away: you’re transported into the wonderfully peaceful world of full electric cars, the Mirai gliding along in near silence. The party trick here is the sublime refinement all the way up to and including motorway speeds – there are few more hushed and relaxing cars on sale today.

Driving along with a virtual halo above your head is an oft-forgotten attraction of EVs. There’s a high feelgood factor in this car and equipment levels are generous, from the excellent 14-speaker JBL stereo to the wireless phone charging and 10.1-inch head-up display that projects speed and satnav instructions up on to the windscreen, so drivers don’t have to dip their head to read important information.

The Toyota Mirai is a rare-groove car and hasn’t been through the independent Euro NCAP test procedure yet. It is hard therefore to judge its safety credentials in isolation. However, you can take faith in the fact that this is essentially the top-of-the-range technology showcase from the world’s biggest car manufacturer: it’s dripping with technology to keep you and your loved ones safe.

The three hydrogen storage tanks are nested deep in the centre of the chassis, away from the risk of prangs or prods in an accident, and they’re built of super-tough ballistic material. 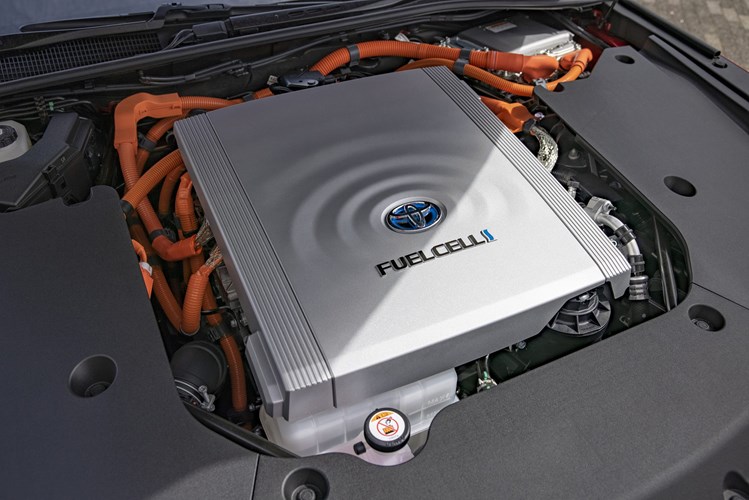 The Mirai’s bodywork is blistered with cameras, radars and sensors to observe the outside world and the data is used to keep the car on the straight and narrow. The Blind Spot Monitor monitors that awkward over-the-shoulder space where danger can lurk, warning if you’re about to pull out into an oncoming vehicle on a dual carriageway, while Rear Cross Traffic Alert does the same when you’re reversing at low speed from a parking space.

If the worst happens, a Pre-Collision System predicts an impact is looming and will warn the driver, prepare the brakes for an emergency stop and – if the driver ignores the warnings – will brake for you, to wipe off speed before a crash. Eight airbags are fitted across both rows of seats to protect occupants in the event of an accident.

Isofix child-seat attachments are fitted to make it easier to fit infant carriers in the back seats.

What engine options are there?

This is a delightfully simple range to browse: there is only one single Mirai powertrain option available, with a 134kW electric motor equivalent to 182hp. Your only choices are to pick between three different spec levels, depending on how much equipment you’d like.

The Toyota Mirai is wonderfully relaxing to drive most of the time. The sense of quiet, the refinement at all speeds and the satisfaction of knowing you’re driving such a futuristic car whose only emissions are water make for a great experience. 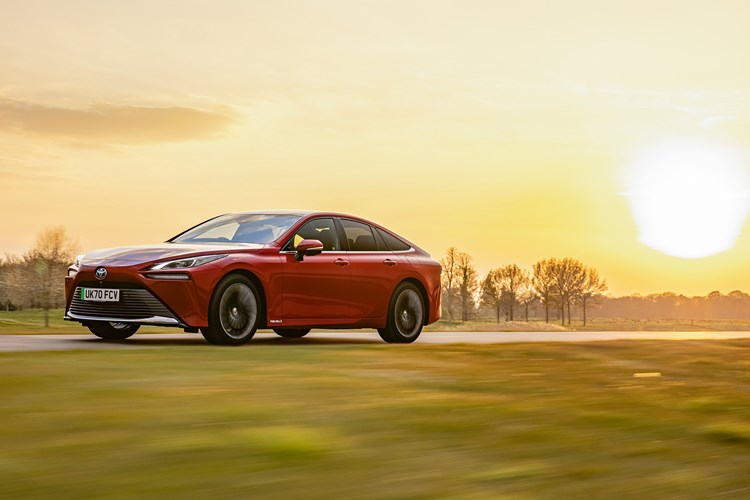 Acceleration at low speeds is brisk, in that way that all electric cars are. Pulling away from traffic lights or out of a T-junction, there’s an immediate surge of power, but after that initial hit of speed, thrust quickly tails away in the Mirai. That’s because this has been tuned as an executive car, not a performance saloon, as the 9.0sec 0-62mph time demonstrates. Top speed is limited to 108mph.

It’s big and heavy – measuring nearly five metres long and weighing the best part of two tonnes – and performance is well judged for its target market. You’ll keep up with the traffic but it’s at its happiest wafting along at a gentle cruise, the pliant ride soaking up most bumps in the road despite the sizeable 20-inch alloy wheels. This is not a car that rewards driving hard or fast.

Another reason not to thrash the Mirai is its range. Toyota claims up to 400 miles between refills, but we managed just shy of 300 miles. If you drove around town at creeping urban speeds, we suspect that official claim would be achievable and the manufacturer recently set a world record for the distance travelled by a fuel-cell car when a standard roadgoing Mirai drove 623 miles. But in mixed, real-world driving conditions involving a mix of urban, motorway and cross-country roads we’d caution that 250-300 miles is more readily achievable between top-ups.

Range anxiety kicks in only too quickly when the UK has only /eleven/ hydrogen refuelling stations.

Ownership costs and how to refuel a Toyota Mirai

Electric cars are typically expensive to buy and cheap to run – but the Mirai flips that logic on its head a little bit. Costs have fallen substantially on this second-generation model, whose price tumbled by a quarter to just below £50,000 at launch in summer 2021. The reality is that many of these cars will be bought by corporate customers with ready access to private or local H2-refuelling systems.

Because this is a full zero-emissions electric car, you pay no road tax and company car drivers will benefit from a pleasingly low benefit-in-kind rate of just 1%. The taxman favours cars like this at present, saving you money on your tax return. However, refuelling costs are more akin to what petrol and diesel owners are used to: we paid £12 per kilogramme when we filled up, with a total bill of £44.52 for 3.7kg of hydrogen. 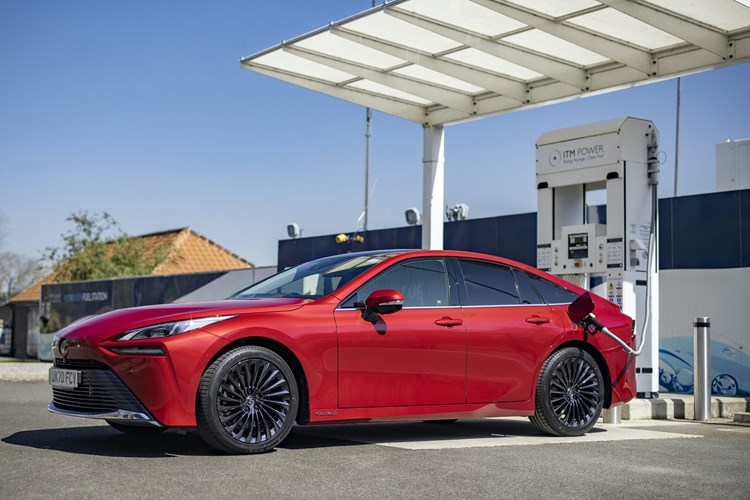 That’s substantially more than most battery electric vehicles cost to charge up – but the Mirai fights back with a much quicker refill. In fact, it takes no longer than it does to top up your tank with unleaded on a petrol forecourt. Granted, there are only 11 publicly available hydrogen stations in Britain at the time of writing, but when you do find one it’s simply a question of pulling in, opening the fuel filler, latching on the H2 pump and pressing a button while the system pumps in liquid hydrogen. You’ll be done in five minutes.

It’s very simple and easy, although we were surprised to find on test that the volume of hydrogen inserted can vary depending on atmospheric pressure, temperature and other variables. Even when ‘brimmed’, we were unable to get anywhere near the 400-mile claimed range; our test car showed just 252 miles of range once we’d topped up, rising to 276 when we flicked the climate control off. This is disappointing.

There is only one technical spec of Mirai available, but you can choose from Design, Design Plus Pack and range-topping Design Premium Pack specs.